So who are these new guys?

Share All sharing options for: So who are these new guys?

"The 28-year-old Braun had to provide a urine sample for testing during the playoffs, and he was notified of the positive test sometime in late October -- about a month before he was named the National League's most valuable player." - ESPN

This, of course, is huge. For one, this is a player who JUST won the MVP. Will he be able to keep it? Will it go to the next person? Whatever the deal is, this is huge.

So, the trade has officially gone down, and if you're anything like me, you're wondering who these guys are. I'm not so much talking statwise, as I'm sure that will be thoroughly covered by AN writers smarter than I.

Wonder if #Tebow is going to locker room to grab his Narnia Dust for second half?! #SpaceJamWater

He was taken in the first round of the 2007 draft by Arizona out of Norwell HS in Ossian, IN.

Watching this video from a news station in his home town, it seems like he has a good head on his shoulders and the Tommy John surgery allowed him to mature not only as a pitcher, but as a person.

I was a little upset with the Colts loss but i can admit as a fan, we got outplayed and didnt make the adjustments we needed to make to win that game. As a devoted fan i still wear my jersey proud and look forward to the next season returning another great team!

Parker is also a gamer.

Q: I hear you're quite the video-game junkie, is that true?

Q: What game are you playing the most these days?

A: Right now, I'm playing the new NHL one. I just got that the other day, so I plugged it right in and have already played a bunch of games.

Q: You play against people online a lot, don't you?

Q: Do you play against fellow baseball players or teammates?

A: No, but I've got buddies that play all the time.

Q: Do you play a lot of video baseball?

A: Uh, I don't actually have a baseball game.

Q: What? You're a professional baseball player. How do you not have a video baseball game?

A: (Laughs) I don't know. That's a great question. 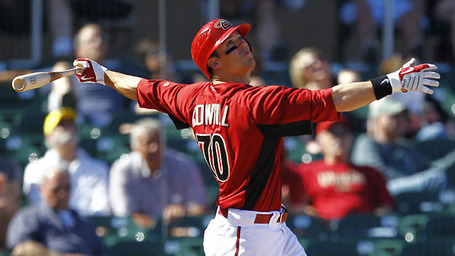 There wasn't quite as much information out there about Cowgill not immediately pertaining to baseball. Like a former A's pitcher, he also went to Kentucky.
The Wildcats athletic department is also rather bullish regarding Oakland's outfield situation.

Cowgill, the 2004 Kentucky High School Mr. Baseball out of Henry Clay, appeared as a pinch hitter for the Diamondbacks in the MLB Division Series, lacing a two-RBI single in his lone playoff at bat. Following the season, Cowgill traveled to Venezuela to participate in the offseason Liga Venezuela Beisbol for the Bravos de Margarita. The 5-foot-9, 185-pound slugger will join an Athletics team that doesn’t feature any big-name outfielders, including Jai Miller, Ryan Sweeney and Michael Taylor, with Cowgill the youngest of the group. Drafted by the Athletics and famed general manager Billy Beane in 2007, Cowgill elected to return to Kentucky for the 2008 season.

As many have noted, Billy Beane tried to draft Cowgill in 2007, but he became another "one that got away," when he felt he wanted to swing aluminum for another year.

Collin Cowgill's phone beeped. He snatched it up and stared at the three- or four-page text message from (teammate Sawyer) Carroll. Cowgill had already made up his mind.The Oakland Athletics were offering the Lexington native six figures to join their organization. He was going to sign, until he read the message. Carroll was going back to UK.Cowgill took the news to pitcher Scott Green, a teammate at both UK and in the Cape Cod summer league. Green too had been drafted, a 12th-round selection by the Boston Red Sox. With word of Carroll's decision to return, the three UK standouts opened up the lines of communication."It wasn't really an all-together decision, but talking to each other and finding out each other's viewpoints and how we feel, how good we are going to be was really the biggest factor in deciding whether to come back or not," Cowgill said. "We all just believe so much in what we are going to have this season."It was official. The trio stared down their major league dreams and walked away from them.

Here's a video interview with Cowgill and UK teammate Antone Dejesus, talking about the transition from college to pro ball.
When Cowgill was a member of the High-A Visalia Rawhide, a moment of anger lead to a season of pain.

Playing High-A ball with the Visalia (Ca.) Rawhide, Cowgill struck out for the second time against the same pitcher. He responded by unleashing a blow on the dugout wall, which dislocated two bones in his hand and required two pins to be surgically inserted, ending his season with 80 games to go. Cowgill had dealt with injury before, missing his entire junior season at UK, but this time it was by his own doing. He realized that his approach to the game needed a dose of perspective."That definitely was a lesson I learned the hard way," Cowgill said. "I think mostly (I learned) not to take every game, every at-bat too seriously. We play 140 games in the minor leagues and we're going to get close to 600 at-bats, so one at-bat, five at-bats, 10 at-bats don't really mean anything. You can't get too caught up in one little thing that happens or even a bunch of things strung together." 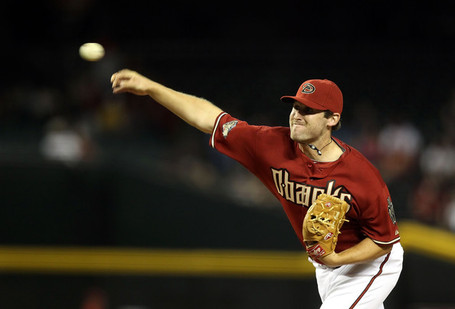 Cook is somewhat from Northern California-ish, as he went to Clovis High School near Fresno. He enjoys Bull Durham and the Simpsons.
He had kind of a rough introduction to the big leagues.

"It's been your life-long goal [to pitch in the majors] and to achieve that is indescribable," Cook said Thursday, about 12 hours after the right-handed reliever surrendered three earned runs without recording an out during the Arizona Diamondbacks' 5-2 loss to Milwaukee. "It was awesome. I would have liked to do better out of the gate, but it can only get better." With parents Chuck and Brenda in the stands at Phoenix's Chase Field, Cook was summoned to pitch the top of the 10th inning of a 2-2 game after his promotion from Double-A Mobile. He proceeded to allow three hits and a walk while also throwing a wild pitch before being removed by Diamondbacks manager Kirk Gibson. "It was about making pitches and executing. It's the same game at Double-A as it is in the big leagues, just more prestige," Cook said. "I was trying to tell myself to make good pitches and get guys out, but that didn't happen. I left some balls up, and they did what they do with them. Good hitters hit bad pitches."

A MiLB writer did some research regarding what Cook is working with on the mound. Not too bad (with graphs and such).

He averaged 94.8 mph on his fastball, and he coaxes that velocity from an easy delivery. His fastball is fairly straight, and it’s no surprise that he thus tries to blow it by batters up in the zone. ... Cook’s two secondary offerings are an upper-80′s power changeup and a mid-80′s power slurve. The changeup comes in so hard that Pitch F/X can’t differentiate the pitch from his fastball, but it’s basically a hard splitter with plus sink and fade that comes in from 87-90, in contrast with the 93-96 mph fastball. The slurve features plus movement for a pitch that arrives at 83-86 mph, with above-average sweep, drop, and velocity for a slider.