Share All sharing options for: 2011 in Review: Vertical Vector Charts

I figure it's time to update some of my old visualizations with new 2011 data. First up, vertical vector charts. 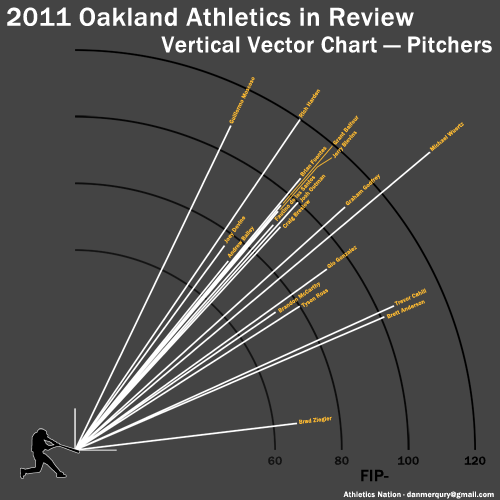 Like last time, each white vector corresponds to a single player. The angle of each vector is mapped to the player's GB/FB distribution, where 100% groundballs would be a flat horizontal line, 100% flyballs would be a vertical line, and 50/50 would be at a 45° angle. Since 8 of every 9 batted balls Brad Ziegler allowed were grounders, his vector is almost parallel to the ground. And because Guillermo Moscoso let batters hit 2 flyballs for each groundball, his vector has the steepest angle on the team.

The length of each line corresponds to FIP-, which is a reversed version of FIP+ so that it matches up with most pitching stats. Since the scale is reversed, 100 is the league-average FIP, 90 is a FIP that's 10% better than the league average, 120 is 20% worse, and so on. Long story short, the length of the line is mapped to the quality of the pitcher. Longer line, worse pitching.

Now, I know that it makes the chart run contrary to what you might expect—a longer line doesn't mean better pitching performance, but the opposite. I did it so that batter performance would be consistent with this chart below. Longer lines mean better batting production. 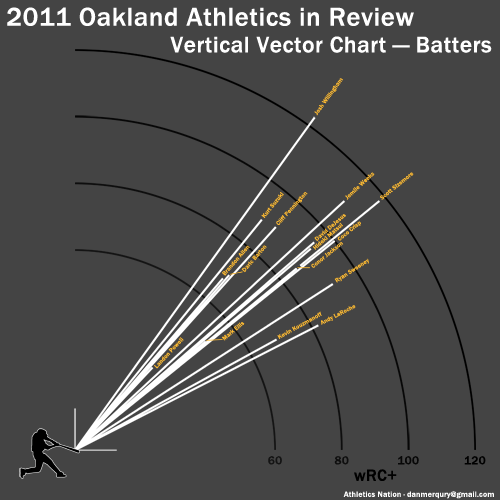