Does Oakland Really Have More Roster Turnover Than Other Teams?

Share All sharing options for: Does Oakland Really Have More Roster Turnover Than Other Teams?

A common complaint that I hear from casual A's fans is that because the players on the team change so quickly, fans feel like they have no connection to the team or the players. Most people aren't comfortable only "rooting for laundry", especially when it feels like most of the players have only been around for a couple of years at the most. But is this really just an Oakland problem? 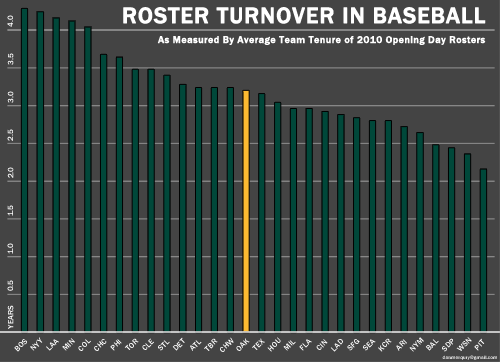 The short answer? No. Even with an opening day payroll that ranked third from the bottom in the majors (and dead last in the American League), Oakland is exactly in the middle of the pack of roster turnover.

Some methodology notes and other things below the jump.