Sunday, Random... Oh Wait: Everything I Ever Needed to Know About Life I Learned at an A's Game

Share All sharing options for: Sunday, Random... Oh Wait: Everything I Ever Needed to Know About Life I Learned at an A's Game

We are shuffling the batting order a bit this week. Nico, who needs to learn to take some pitches, is dropping down one spot in the order. Since I have been on fire, with action figures and such, I get to try to drive in some runs for a change. (And don't think I didn't notice that less than a month after MC Willinghammer was featured in my post the A's announced MC Hammer Bobblehead Day. Man my ego is getting out of control). 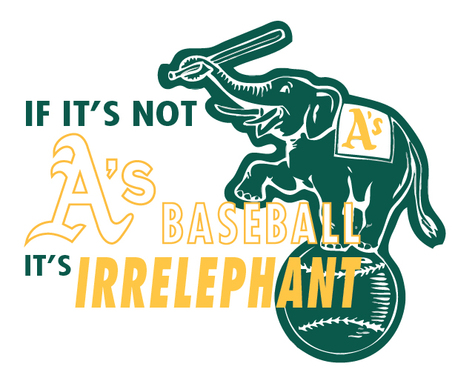 Some of the few life lessons that I didn't learn from Yoda:

1. Never let them know when they are getting to you.

Dave Stewart once taught me... Heck, Dave Stewart a whole bunch of times taught me that just because there are runners on first and third and nobody out you don't need to get all panicky. For those of us who watched Stew mow down the American League for four years in a row, with The Stare on full display once every five days to the tune of 20-20-20-20, this lesson is hard to forget.

In short. Never let 'em see you sweat. And throw the Forkball when they are expecting the Fastball.

The best way to beat a jerk who is trying to get your goat is to pay him/her no mind. Just don't let them score a run in the process.

2. Speak your mind. Don't over, or under, do it. Know facts when speaking your mind.

Ah, the days of Tony La Russa. In my mind the TLR years are the most prestigious shelf in the most prestigious library known to man. The volumes of baseball perfection are framed by the book ends known as "Billy Martin" and "Art Howe." I know, there was some other dudes (Steve Boros, Jackie Moore, Jeff Newman) sort of wedged in there. But, in my mind... These are the three examples of "speaking your mind."

Billy overdid it. Complete with kicking dirt on umpires and such.

Art underdid it. I always envisioned him running out to the plate yelling, "Golly gee willikers, Blue! Are you sure he is out?" Followed by "I am sorry for my foul language. I will wash your car tomorrow."

TLR. He would be all like, "Pursuant to the regulation found on page 81 of the Major League Baseball rulebook, defined as Rule 8.05, clause a, that is a balk." He was a lawyer, after all.

Not only did they walk, but they could rake.

My Grandpa Joe used to always say, "Don't swing at the first pitch. Unless it is right down the middle and then smack it right back at the pitcher." I think these guys knew my Grandpa Joe.

Don't jump at everything. Just jump at first pitch meatballs. This is the secret to success. And I thought Grandpa Joe was talking about baseball.

4. Do unto others as you would have done to you (AKA respect the Curveball).

I am not sure if it was Nolan Ryan, or Hideki Irabu. I am only certain it wasn't Mike Oquist. I just know that if you keep leaning out over the plate, like the dude pitching can't bust one up in on you, it is really going to hurt at some point. Or, if you scoot up in the box to catch the curveball before it breaks way too often, it's going to sting.

But you have to remember, assuming you are Hideki Irabu or Vicente Padilla, that your team has to bat too. So, it is a bit like a dance. Maybe a conversation. In real life you can throw heaters under the chin of anyone you want. You can yell, scream, demean... Whatever. Just remember, eventually you have to step up to the plate and it might be your helmet cracked by a 100 MPH fastball disguised as "turn about is fair play."

5. Kraut and relish count as two servings of vegetables when served on a Colosso Dog.

Okay, I admit this one is hogwash. Live a little.

6. There will never be another tonight.

The aforementioned Jason Giambi once rode on the shoulders of his young teammates. Celebrating a division title win. Microphone in hand, he proclaimed his love for the A's and his desire to never leave. He looked like some new jack Roman Emperor, young and full of vibrancy. Surrounded by fresh faced young soldiers, all of them staring down the setting sun with the gaze of an undisputed champion. The sentiment lasted a little more than a year.

But I don't regret going hoarse that day. I don't regret arguing his MVP credentials. Happy days, like those, don't last. Recognize them when they are here. Cling to them as long as they are. Long for them when they are gone. As much as it is true that when you reach the bottom there is no where to go but up, when you reach top there is no where to go but down. It is the way of things. Embrace ascension.

Ain't nothing like Kool and the Gang blaring as you are high fiving some dude you never even talked to before. When the A's win, we all win.

This extends beyond baseball. When the <insert whatever you want here> goes well, we all benefit. I find this lesson especially poignant in light of recent events. Root for good things to happen for all of us and when they happen dance with anyone and everyone.

We are all in this together. One hope. One heart. One love.