I've seen a lot of ideas on what to do this offseason. The corner outfield hitter discussion has been done to death—everyone knows we need one, badly. Crawford or Werth. Yeah, we know. But what about another pitcher? Another pitcher surely couldn't hurt, and if it becomes really necessary, we could trade away one of our young starters in the rotation for a bat. The key here is that we can't spend that much, as we need to save a lot of money for the places of true need. So what do we do? Find talent that is undervalued, so that we won't have to pay market value for the amount of performance we'll get. Sound familiar?

FIP is expensive. GMs around the league look for pitchers with a lot of strikeouts and few walks or homeruns. Thankfully, we've got something else—a phenomenal defense at all positions, especially on the infield. Why not use that to our advantage? Trevor Cahill may not have a very good FIP, but he's able to use the great players around him perfectly by pitching to contact, which his defense mops up. If Cahill pitched in front of a horrible infield defense, his ERA would probably increase by two whole runs, and his BABIP would likely be a full hundred points higher. Because of Oakland's fantastic defense, Cahill's 2010 has been near-Cy quality. So who are the "anti-Cahills"? They're ones that have similar strengths as Trevor Cahill in terms of their abilities in generating groundballs, but are languishing behind shoddy defenses that inflate ERAs and BABIPs. Those are the guys we should target, as they'd be cheap, and we could turn them into gold.

For reference, I've made a chart that shows the quality of each team's infield defense, according to UZR. We should target pitchers playing on teams towards the left of the chart.

Masterson is basically a super version of Trevor Cahill. Seriously, check it out. They're the same pitcher. 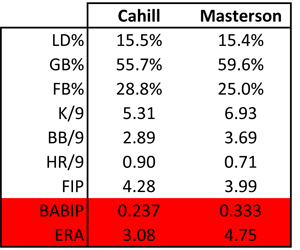 Justin has the best groundball percentage in the AL, and a completely ridiculous sinker that has four to five more inches of downward break than Trevor's. And Cahill already has one of the best sinkers in the majors. That's insane. Unfortunately, his big downside is that he throws from a distinctive Eckersley-style sidearm motion, which makes him very deadly against righties, but mediocre against lefties. This season, he's put together a bad 4.75 ERA, but that figure is buoyed by a .333 BABIP, which is what happens when you put an extreme sinkerballer in front of the worst defensive infield in the majors. With Boston, his BABIP was far lower, and his ERA was in the low 3's. When he came to Cleveland, he actually improved as a pitcher, but his ERA skyrocketed thanks to Cleveland's cement gloves. He could be magic with the right defense.

Masterson was acquired from Boston in a dual-centerpiece type deal with a high-upside single-A pitcher for Victor Martinez, so his asking price could be a little too steep for us.

Hammel's ERA hasn't changed since being traded by the Rays for a C+ pitching prospect in single-A, but he completely redefined himself in Denver. I don't know if it was a Rockies coach or some advice from a particularly valuable teammate, but Hammel went from a below-average starter with a particular fondness for giving out walks and homers, to a groundball-inducing control artist who walks nobody and rarely has to watch a longball...in the worst pitching park in the majors.

And his new found control isn't just a Coors Field thin air product either—he's been better and less wild away from the mountains. That's a very surprising transformation, but he's fruit ripe for the picking. Hammel could thrive outside of Colorado if he had a strong defense behind him. He's currently listed as the Rockies' third starter, but they have a wealth of starting pitching prospects moving in and around the high minors that could use a shot in the majors.

These two look like the best candidates, but other names that could be in the mix are Paul Maholm, Zach Duke, and Kyle Davies, all of whom are pitch-to-contact types that have had poor seasons due to bad defense. I don't know if we can snag any of these guys, but there could be a huge payoff down the line if we did.