1990 A's Were Scary-Good, Except for that Last Part

Share All sharing options for: 1990 A's Were Scary-Good, Except for that Last Part

A guy would have to be a real jerk to drudge up such a sour-tasting memory on an off-day.

The Oakland Athletics won 306 regular-season games from 1988 to 1990. But to many A's fans, those three seasons of dominance are dwarfed by two devastating defeats in October, sandwiched around one lone World Series triumph that is remembered more for an earthquake than baseball.

But John Hickey speaks a piece of the truth- in a book celebrating the La Russa Era- when he writes:

"Given that logic, the Oakland A's, winners of the American League West- the toughest division in baseball- for three straight years starting in 1988, have proven their greatness."

Hickey goes on to say that even though the A's were surely humbled in their losses to Los Angeles and Cincinnati, they were still very much the envy of Major League Baseball.

A long-time scout told Steve Wulf of Sports Illustrated, in the magazine's pre-World Series analysis, "The scary thing is that even if the Reds win, we'll be talking about how to beat the A's again next year."

The accolades and awards ran amok for those 1990 Oakland A's, forcing me to turn to the bullet point to break it all down:

And how insane is it that I didn't mention Jose Canseco?  Or Carney Lansford?  Or Walt Weiss?  Or Dave Henderson?  You get the picture.  Oh, and their manager was pretty good, too.

The mastermind behind the A's success.

As Hank Sauer- working as a scout on the other side of the Bay- gushed, "This team has everything."

Indeed.  Dave Newhouse of the Oakland Tribune likened a Coliseum excursion to a stroll through the candy store.  What flavor?  Take your pick, bub.  Hmm, let's see, I'll take two of the Rickey Rolls, a Jose Smash N' Bash, and an Eck Saver.  You could get a cavity watching these guys.

As for the unfortunate souls having to chase Oakland?  It was more than just a toothache.  To their credit, they knew exactly what they were up against:

"Our goal is 100 wins." says John Schuerholz, the Royals' general manager. "Oakland has set high-water marks in this division."

But the A's- even after seeing Dave Parker, Tony Phillips, and Storm Davis depart to less-than-greener pastures- knew it too:

In the off-season, the Royals and the Angels spent millions attempting to reach the Athletics' level, while Oakland lost three players to free agency. What, the A's worry? Says manager Tony La Russa, "No one, including Kansas City, will pitch better than us." Says pitcher Dave Stewart, "We're probably more hungry than last year, because the other teams are better. But we're better too."

The Chicago White Sox proved to be the only real challengers to the division title, but once the A's took back first place on July 8, it was theirs for good.  The rich got significantly richer with Oakland adding a Harold (Baines) and two Willies (McGee and Randolph).  It all seemed so unfair.  Not that I cared.

Carney Lansford was the cornerstone of the champion A's.

Came the playoffs, and the Red Sox- as was the case in '88- were no match.  The A's put on a pitching clinic to earn their second sweep of Boston in three years and a third consecutive trip to the World Series.  They did it without hitting a single homerun in the ALCS.  Stewart beat Clemens 9-1 in Game 1, followed by Welch's 4-1 victory the next night.  Eck closed the latter contest, and served up a cold dish of revenge to former teammate Dwight Evans:

Runners at first and third. Was there hope? No, there was Eckersley. The Eck was summoned to face Dwight Evans, and he struck him out on three fastballs. "Up, up and up," Eckersley described them. "He hit a grand slammer off me last year, so I guess we're even."

The incomparable Eck had another eye-popping season.

My brother John and I skipped out on work for Game 3, won by Mike Moore, 4-1.  The Bash may have been absent but the A's were still plenty brash.  Said Canseco, after the A's took a 3-0 series lead: "I'll say it's over.  Use common sense."  The next afternoon it was officially over, with Stewart besting Clemens, 3-1.  Boston scored just one run in each of the four games.  Someone check for a pulse.

As for Stewart-Clemens, it could hardly be called a rivalry.  This was more like Roadrunner-Coyote.  With three regular season wins and two more in these playoffs, Oakland's heart-and-soul was now 8-0 when pitching opposite Clemens.  The Boston ace was ejected arguing balls and strikes during Oakland's three-run second while Stew pitched shutout ball into the ninth, before exiting to a standing ovation. 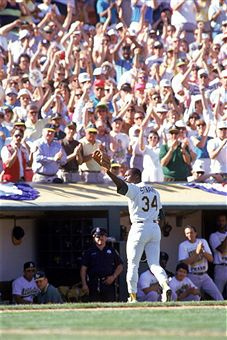 There was just no stopping them. In the late innings of the fourth and final game of the American League Championship Series, a conga line of fans carrying brooms swept along the aisles of Oakland Coliseum. As it passed through the stands, the procession grew longer and longer and more mind-boggling.

As had the Oakland Athletics' postseason winning streak. Their 3-1 victory over the Boston Red Sox and the 4-0 sweep of the series gave the A's 10 postseason wins in a row, and wins in 12 of their last 13. As the A's readied themselves for the Cincinnati Reds, there appeared no way of stopping them.

"How do you beat them?" asked Red Sox second baseman Jody Reed. "Well, if they play real bad...but that's not going to happen, so forget that."

"How do you beat the A's?" asked Red Sox leftfielder Mike Greenwell, who went 0 for 14 in the series. "If I knew the answer to that question, I'd quit playing and become the greatest manager ever."

Then in a most-shocking World Series, the world-beaters became the beaten; the sweepers, the  sweep-ees.  Clearly their supply of spinach had run dry.  Oakland has not played in a Fall Classic since.

That the A's lost the 1988 World Series is near-forgivable.  It was their first time, they were young, they were demoralized by a homerun we're not supposed to talk about, they ran into a buzz saw in Orel Hershiser, etc.

But this time?  This team?  Seems inexplicable, if not inexcusable.

In fact the World Series sweep to Cincinnati almost makes one forget just how ridiculously good the 1990 A's were, and what a privilege it was to watch them day in and day out for three incredible seasons.

In my opinion, it shouldn't.

The La Russa A's did this quite often.