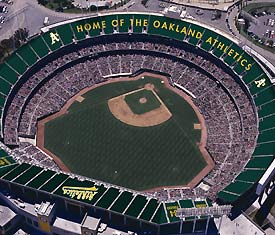 Wherein an Emperor that never had any clothes anyway gets himself just a little more naked, for the dual purposes of your entertainment and his exorcism.

It all went so deliciously, divinely, and descriptively down to the last detail, to the point where you had to wonder if greater, more multi-dimensional forces were somehow availed of the situation and had burst into play like little crazy-eyed diablos sin brazos... a Spiritus Mundi moment with a baseball backdrop.  We moved so easily through the third deck, unnoticed by the security forces -- or perhaps, just perhaps! they knew what we were up to and had decided in their shared confidence born of similar frustrations to just let it go.  After all, we were in a circuitous way trying to save their jobs and their possibilities for employment in this or any future venue in the 510, just in a less-than-legal way.  We were shocked that our notification to the press that "something" was going to "happen" did not produce a heightened sense of policing presence in the upper reaches of the building, but there we were. Sixteen Judas Priests: not quite living after midnight, but most definitely Breaking the Law.

The thing came down so exact, displaying a superb synchro-synergy like a dream on the cusp of consciousness, a parallel reality.... forever Jung.  Each of us deployed to our action posts in the top of the 7th... thankfully the windy evening we'd chosen for our transgressive transduction had the providence to play host to a close game where a hearty 10 or 12 thousand had made their way to the Concrete Crematorium with Concessions called the Coliseum.  Somehow the giveaway -- Vince Cotroneo Bobblehead Night -- had not sold out the place, but nonetheless the idea was to make the hit (that's a musician's term for starting the set... when's the hit?) when everyone up in the piece was at a moment of alternative attention and already distracted from the playing field.  The howling winds coursing through the concrete canyons laid down their weary tune as we ascended to atop the spot, two per section on either side of whatever tarps didn't have displays on them commemorating any retired numbers, championships or achievements which we'd dare not denigrate or defile.  If ownership was going to paint themselves as the only corporation on Earth unable to use the acres of blank advertising space available for which to promote their own once-respected product in its own homespace, then we were going to liberate the sullen green emptiness and let them seats breathe once again, if only to let fly their silent cry of "Why?".

The whole thing had really got to the boiling point in the winter, when they failed to throw all their freed-up cash at Carl Crawford, who was practically begging to play LF behind all that snazzy young pitching for them and even said so on a golf course in Miami in December... why haven't the A's called?  Then the public trashing and dismissal of Jayson Werth, where it came out at the winter meetings in a text message unintended for public consumption that they thought he was some sort of longhaired druggie who only hit in Philly cuz he swung at the middle ball of the three he always saw whenever the pitch was thrown.  Once they sent Carter -- who K'd more than Jack Cust (now the M's DH and leading the AL with 21 HRs, figures) with a blindfold on -- down and Taylor broke himself yet again in the horrible Sacramento Dugout Heater Accident in April it was right back to Travis Buck and Matt Watson in the OF... a repetitious loop duller than the entire filmed works of Andy Warhol would seem to someone not on drugs or named Jonas Mekas.  The first month spent atop the AL West had already dwindled into third place by this, the first week of June, as the pitchers began perhaps to subconsciously get that they were not to be supported by any meaningful offense.  We knew it all along... this ownership fancied itself the Louis the Sixteenth/Marie Antoinette of pro sports and they were letting us all know the plan was to Let Them Eat Carson yet again, just like last year.  As I mounted the ramp by the Value Deck (now they were charging 20 bucks up there!) with my tools of tarply truncation nestled in my knapsack, I couldn't get the song the wind seemed to be singing out of my burning brain.  Louie, Louie... oh, baby.... we gotta go.  Yeah, yeah, yeah, yeah, yeah, yeah.

We knew we were about to do something less-than-ethical but maybe we loved it too much to leave it, just like the lonely man there on the corner of 66th and Hegenberger, pushing the millstone shopping cart of stereotype up the endless hill... and how his plight had helped to allow the consent in the national public at large for the perfidious deeds we had seen these owners and their Friends in High Places (when in Rome, do as Seligula does) make their mendacious machinations with for years now.  Oakland can't build anything... it's all about destruction and crime and death and savagery, doesn't anyone with a brain already know that?  A living referendum on the failings of "those people" when after a while you began to get the idea that to the wealthy, the connected, the privileged proprietors, we had all become an undesirable "them" to be shunted aside. This was our moment of tearing the windows in our broken hearts open and bellowing with blast-furnace bellicosity how we were as mad as Hell and we weren't going to take this anymore.

That Spring I'd beaten the horse so dead that Chris Townsend had begun referring to me as The Emperor of Excuses, about how if Rickey and Reggie and Too $hort and Tom Hanks had paid for and built them a state-of-the-art stadium in Jack London Square -- a palace worthy of the name which would set the serious standard for all that would follow anywhere else and then they'd placed a groovy green-and-gold bow on top of it for The Grand Opening of the New Era of Oakland Baseball -- that the owners would've just politely said  "No, thanks." with a phony, entitled rerun smile and set about what they'd been put in place to enact all along... which was to get outta Dodge by any means necessary.  Like Van Morrison at Montreux that time... we're gonna play this song and if you don't like it, you can go f*ck yourselves.

The press was notified that evening through a critical Communiqué from BIOMASS (Baseball In Oakland May Abdicate Shortly Soon)... I made sure it was known to the appropriate media outlets like ESPN, the local news, the Chronicle, that a statement would be made in the venue at sometime during the game against what we felt this ownership had done and was continuing to do -- something akin to those cooked studies funded by The Heritage Foundation that "proved" Global Warming was a fantasy and proferred flimsy "scientific proof" of same so folks too busy to know better might turn up the thermostat that much further and boil themselves like frogs in the proverbial cliché cauldron that much faster.  We felt that the conclusion had already been reached, the die cast, and everything that had happened in the last 5 years had just been an exercise in the inevitable, to suffocate casual interest in the franchise with neglect and omission whilst all the while claiming no responsibility for the downward spiral. When Bob Geren was signed in February to a five-year extension and the March public-money vote in the South Bay had gone down to a narrow but decisive defeat, the intensity of the ennui had ramped up to a point where we were sure that any day we were gonna see John Halama hitting clean-up and the DH lost (via lineup-card mishap) in interleague games in NL parks where there wasn't even a DH in the game.

Years of anger had mounted to a point where action had to be taken if dignity was to be retained.  We had always known in our hearts that when they kept saying "Oakland never had a plan," the truth was they had stopped picking up the phone years previous when their caller ID screens had said "Oakland calling".   Oakland Calling, for the zombies of death.... quit holding out, and draw another breath.  The Clash of Wills had to begin sometime and we felt we had to fight for what we loved to the point of sacrificing our freedom to make our point to a wider world all too prepared to dismiss the whole situation as yet another product of predictably perilous poverty in a city their narrative saw as Mad Max Beyond WelfareDome but which we knew as Fox and Paramount and something worthy of more Merritt.  So we knew at the least that we could draw some peripheral, meager attention to the plight of the situation and tell at least a part of the tale about the whys and the wherefores -- from our perspective, anyway -- of how this Mighty had come to feel so faded and so fallen. To go down, surely, but to go down Swingin' like our beloved A's had before someone had told them that walking -- with the bats on their shoulders until every night was Dress As An Empty Seat Night -- was a preferable alternative.

When the inning ended and Take Me Out to the Ballgame reached that crescendo point where you root, root, root for the Aaaaaaaaaaaaaa's, that was the signal to do the deed.  Eight pairs of us ran down the long-empty aisles (half expecting to find the many enemies of Al Davis interred beneath, mummified like the Raiders' many failed quarterback choices) cutting the placeholding twist ties -- the Oakland version of the old obsolete Metrodome and its Baggie? -- as we went, until the entirety of the uninscribed panels of tarp came unmoored and flew away in the whirling winds... shining like crazy dark green diamonds and blown on the steel breeze, high over the astonished assembled.  Then, something we hadn't planned for or expected.... a HUGE and resonant cheer as one panel of tarpaulin fluttered and tumbled down onto the field, sending Balkin' Bob Davidson scurrying as Rajai Davis -- stunned to stationary silence -- watched agape from the on-deck circle.  Confusion giving way to realization, giving way to a kind of catharsis pent up for longer than had been fair to anyone, giving way to the unmistakable sound that let us know that at least for this round of the fight, the work was done and the battle somewhat won.  13,000 or so people in a unison you could have heard from San Leandro, where the dark cloud of several tarps had left the building en route to those hills, over and over:

The moment of exhiliration passed... then it was all the swirl of cops and the blue shirts and the guns and I swear I even saw Kettle Corn Crazylegs getting ready to dance in the mayhem of handcuffs and orders to get down on the floor... next thing we knew we were heading to the pokey, buoyed with the buzz of the brazen but terrified with the trounced timidity of the taken.  But just then the bumpy rum-rum-rumbling of the paddy wagon somehow woke me from the deepest possible REM sleep and I realized -- with a mixture of disappointment and a desire despite the duplicity to let things play out enabled with the benefit of the doubt -- that it had all been a wild and fitful Summertime Dream, with someone on the stereo as I slept singing sweetly about Sundown.

Sometimes, I think it's a sin
when I feel like I'm winnin'
when I'm losin' again.