First of all, I would like to thank all the donors from Athletics Nation who made it possible for these children to attend their first baseball game, and even have Dodger dogs! I would especially like to thank James, who attended the event with me, provided most of the pictures from the game, and who bravely let the kids take some pictures with his fancy camera. I'd also like to recognize another AN user (feel free to identify yourself in the thread) for providing packs of baseball cards for each child to open at the game. I would also like to thank Chris Mason from the Union Rescue Mission, who coordinated the travel for this outing, and let us borrow the kids for the afternoon.

Things got started last week, as Andre Ethier made an annual appearance at the Union Rescue Mission to gill Dodger Dogs for the Mission before last Wednesday's game. The Union Rescue Mission, with its slogan of "The Way Home" is a non-profit organization, mainly located at the five-story building in Los Angeles' Skid Row. It's one of the largest Rescue Centers of its kind and is the oldest in Los Angeles. Sleeping anywhere from 1000-1100 people a night and feeding countless more, URM offers food, shelter, clothing, medical and dental care, recovery programs, transitional housing, legal assistance, education, counseling, and job training to homeless men, women, children, and families. 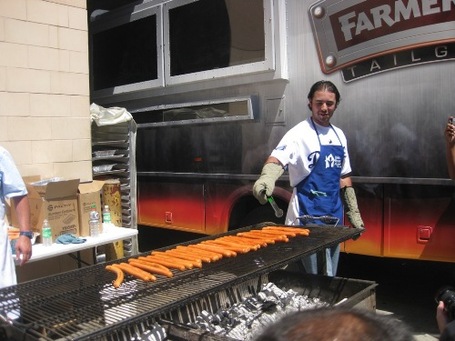 It goes without saying that there are hundreds of children who are living at the center. Just a cursory glance at the facilities will tell you where baseball ranks among the kids/teens living and playing there; a full-size gym houses both a basketball and volleyball court, but the immediate urban neighborhood can't support a baseball field.

Not that the children don't like baseball; far from it. Generous donations have supplied the center with gloves and baseballs, and the gym is the setting for the baseball "field". And thanks to donations from the Athletics Nation community, the kids had a chance to see their very first professional baseball game, in person.

The donated baseball card packs were a huge hit: 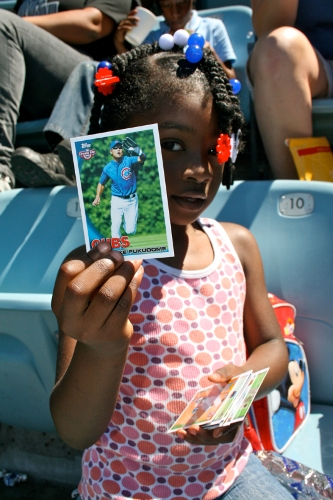 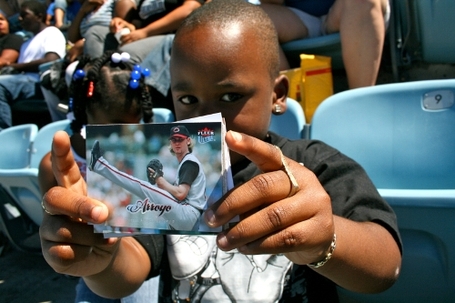 And with the extra money collected, we were able to order Dodger Dogs to pass out to the kids. 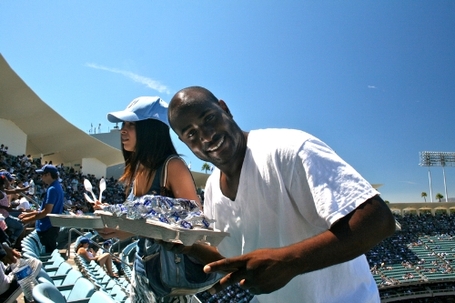 I would say they were a hit. 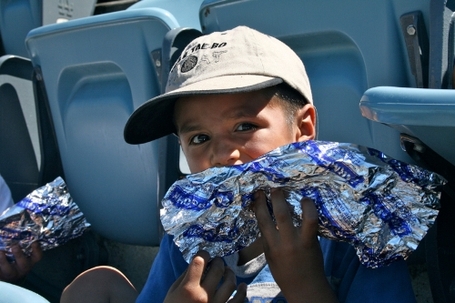 The afternoon was gorgeous; blue skies and the hot sun; I wish the game had been 11-10, but the Reds beat the Dodgers in what was a low-scoring affair. There were still plenty of opportunities to cheer, however. 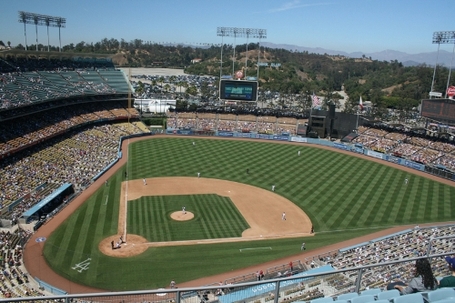 And during the later innings, the kids found ways to amuse themselves, that didn't exactly include watching baseball. 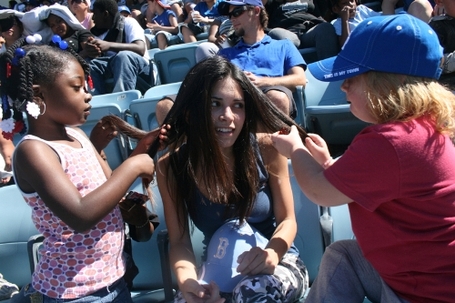 All in all, a very successful outing. Thanks a million to everyone who was involved! 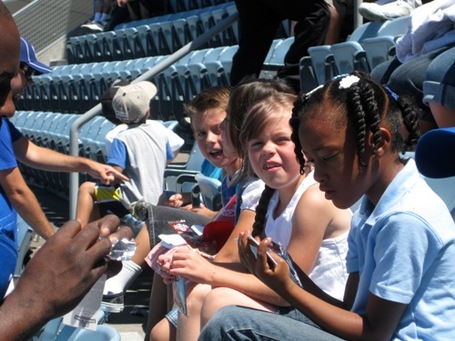