Yeah, We Need To Upgrade, But Where?

Share All sharing options for: Yeah, We Need To Upgrade, But Where?

Two weeks ago, Pat Andriola over at Fangraphs published an article on the economic concept of marginal utility, and why it's extremely important for baseball. He led off with this great example:

Let’s say you are building a dam, and you want to make sure this is the best dam that’s ever been built. You gather your logs, get some help from friendly beavers, and in two weeks have put together a pretty fine dam if you can say so yourself.

Then, when the river starts to actually run strong, you begin to see that some pieces of wood aren’t that great. But you know those holes are there; they’re always going to be there. Not every piece of wood can be equal. The foundation, the best pieces of wood, the core of your dam, is what makes it a great dam. The other logs are just inevitable imperfections that, even if they are mended, won’t ever make that big of a difference.

So, needing to strengthen your dam somehow, you push the strong logs of your dam. And you push them and push them until you can’t take it anymore; but your dam still isn’t as good as you want it to be. You give it a serious look-over. No, it’s not the minor logs that are serving their purpose. It’s not your building skills. It’s the damn supposed "best logs" not living up to their expectations. So you rip them out and try to get even stronger pieces of wood. Before you know it, you’re out of the logging business and trying to get a senior scouting job with some National League club.

Upgrading the strong logs even further? You'll get far more bang for your buck by upgrading the weak logs. It seems like common sense—but people always tend to forget it.

Let's assume for simplicity that the player free agent market is perfect, and that all free agents get contracts that perfectly add up to $4MM for each win they contribute to a team. Now, let's also say that a certain team has a first baseman, say, Baric Darton, who is worth three wins to his team. He's a strong log. Sure, there are other star first basemen out on the market that could be worth four or five wins, but why replace a strong log with a slightly stronger log when there are other, weaker logs to be upgraded? If the team goes out and purchases a four win first baseman, say, Mustin Jorneau, they'll pay (in this theoretical player market) $16MM for him and his four wins. And what will they get? One extra win of improvement over the strong log they already had. Even though the team purchased Jorneau at exactly the market rate, no more no less, the team essentially spent $16MM for one extra win. Not worth it in the slightest.

Let's get out of the realm of fiction and thinly-veiled player allusions. The Oakland A's have the pitching staff to contend for the playoffs, but they've got hitting issues, to put it lightly. Thankfully, a lot of money is coming off of the books with the departure of Eric Chavez and Ben Sheets. At what positions should the A's look to upgrade? 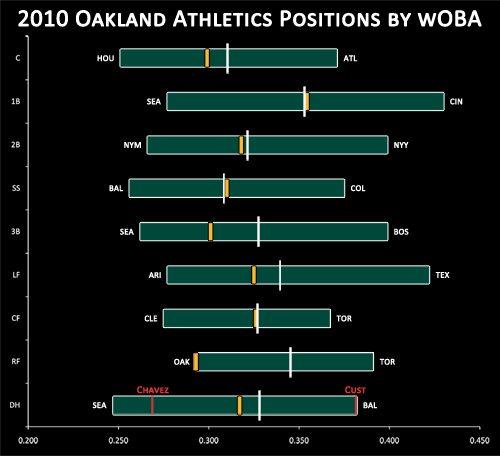 Hilarious things first—yes, Seattle's DH this year has so far been about eight runs worse than a replacement level catcher.

So which positions would be the best positions to upgrade, providing a large improvement for each dollar spent? Catcher has been a little below average, but based on how well you rate things like working with pitchers and other catcher type things, Kurt Suzuki could be somewhere between below average and average. Either way, we've got bigger holes. And first base, shortstop, and center field have all been around average offensively, but the plus defenders we've had at those positions push them above average. Wouldn't be worth the upgrade, either in terms of money, or in prospects in the event of a trade.

A quick note about our DH: Our DH production has been below average, but that's a bit misleading. The other positions have all either been occupied with full-time players (1B, SS, 3B, RF) or split among players with roughly equal production (2B, LF, CF). DH, however, was split about 50-50, with about half of the at-bats given to Jack Cust and half given to a rotating cast of misfits (mainly Eric Chavez, but also Fox, Suzuki, and Ellis). Because of this, I marked Chavez and Cust on the DH portion of the graph accordingly.

So where does that leave us? Second base has been possibly a little above average if you include defense, but will Mark Ellis or Adam Rosales really be able to produce at this level next year? Third base has been significantly below average offensively, but UZR thinks Kouzmanoff has been the best defensive third baseman in the American League. An upgrade at these two spots could be worth discussing. But the biggest hole, by far? Corner outfield. Left field is below average, but right field has been the worst in the majors. An upgrade here would work wonders. Thankfully, two of the top three free agents this offseason? Corner outfielders, in Carl Crawford and Jayson Werth.