Monday Metaphorical Matriculation Manifesto: The Waiting Is the Hardest Part

Share All sharing options for: Monday Metaphorical Matriculation Manifesto: The Waiting Is the Hardest Part 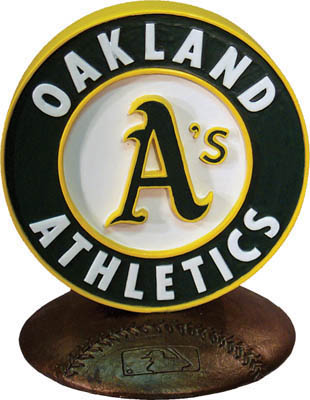 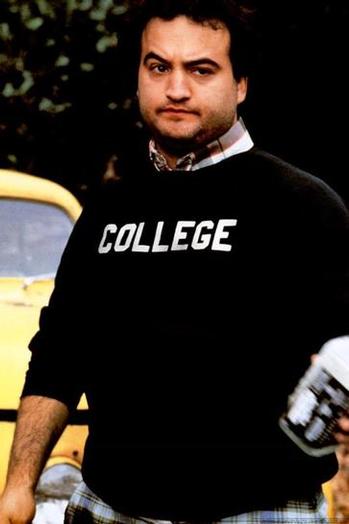 You look like you could use a snifter of optimysticism...

It's a lot like college, you see... anyone who's been there and done that as an undergraduate knows what I mean.  Four years is a long time, especially when the passion of youth has yet to be tempered by the often inclement weather of experience.  You go to classes you fail to see the point of, often at hours you'd rather sleep peacefully through, and listen to the experts fill your head with whatever they think you'll need to know to make something of yourself when at last you are turned loose upon an unsuspecting and unforgiving world.

We are there right now, we may not know it but we are there, as a group we are right there.  A's fans have waited, sometimes patient, sometimes pissed off, for the four-year rebuilding plan to reach its boil and for Supper (or at least some soup) to be Ready.  All of us have eaten the cheap Top Ramen of Eric Patterson, subsisted on the pre-packaged luncheon meats of Matts Watson and Carson, and noshed hungrily, if distastefully, on the knock-off, nutritionless cereals of Emil Brown, Greg Smith and Bobby Crosby.  We have done the required coursework and even the least knowledgeable among us know our OPS from our OPP, and we're still down with it.

The 2010 A's lineup has had many of us scratching our noodles in confusion.

My Monday message today is one of patience, for there is a Perfect Storm of circumstance drifting inexorably towards us, and if forecasts are accurate we will in due time be washed clean by the rains of redemption.  Of course skepticism is always in fashion and many here will dismiss what I have to say as mere foolish and imaginative speculation, but that's okay.  As one of my great heroines once sang, I'm a dreamer... a schemer with an eye for a show.  But it's difficult to deny that the level of frustration we've all felt coming to a fever pitch this season is borne less of a sense of terminal hopelessness, and more of a feeling that we are so whisker-close to something very, very special here.  Something that -- if the waves break like they appear they could -- we''ll remember for the rest of our lives.  So come on and take this little ride with me, with the caveat always that any great movie requires at least a slight suspension of disbelief.

This isn't about the next 6 weeks.  Any sensible, realistic person (not that I am either of those things) would have to reach the conclusion that 2010 is not our time but instead a necessary and vital step along the way: Senior Year, if you will.  Graduation is almost upon us, and to me this means a distinct and unavoidable possibility that the next 14 months will end with the number 2011 emblazoned in a circle all its own upon the green coverings which obscure our third deck... but not our optimism or our ability to practice mindful patience and see things through to brighter days, as hard as they may be to visualize through the dark clouds which we feel surrounding us at present.  It's a Perfect Storm really, and to borrow a cliche from Kevin Costner it takes a measure of faith to believe that if they rebuild it, good things will come.  For me, it's about three central factors: The movie, the money, and the movement forward of our young-gun starting staff towards elite status.

Mamas, don't let your babies grow up to be A's fans.

First, the movie.  In the course of the next 12 months, we will see our beloved franchise become the focus of a great deal of attention: much of it from outside the typical sportshead realms and a good deal of it from people who wouldn't know Art Howe from Art Nouveau or Billy Beane from Billy Joel.  For them, it won't be either sadness or euphoria and the rollercoaster we're hooked on, but just what they see on the big screen vs. the current state of the team they will gather from the periphery of Sportscenter on the smaller screen.  This film will depict among other things the glorious achievement, likely never to be equaled in our lifetimes, of a major league baseball team that once won 20 consecutive games.

The architect of that achievement is many things, but I don't think one of them is a person who will put the enterprise in a position to be judged negatively alongside its recent past, soon to be a major motion picture.  Say what you like about our GM, but he isn't an ego with whom the idea of has-been status is going to sit well... he doesn't want people coming out of the theater going, well, he sure WAS a genius, but now look at him!  He's a failure and they have 2000 people a night showing up to watch players whose own parents don't even recognize their names score their one run a game. Why, the only bigger waste of 2 hours and 17 minutes than this movie would be going to an actual A's game! 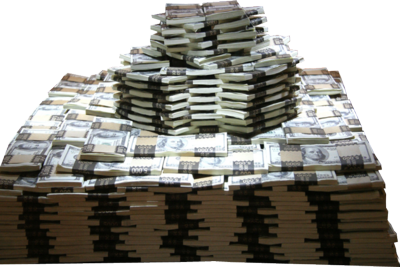 As of this winter, the A's will have more money than all the Medical Cannabis dispensaries in Oakland combined, and with none of the associated binge snacking and drowsy forgetfulness.

Then there's the money: we know all about it so there's really no need to belabor the point too much.  The Exxon Chavez Disaster is over: that's 12.7 million.  The total waste of 10 million on the most overpriced Sheets since Saks Fifth Avenue had their big Bedding Sale is over and off the books.  If Mark Ellis goes, there's another 5.5 million.  If Jack isn't back, there's another couple of million.  And then there's the corporate welfare check luxury tax money, which might be as high as 30 million.  Imagine if you had 30 million... you might be as high as Bob Marley's cat with that kind of scratch fever.  So the second part of the Perfect Storm falls neatly into place: this franchise has had people from respectable reporters (Monte Poole) to raving nutjobs (the man in my mirror) accusing both them and MLB of a willful conspiracy of neglect and mendacity for quite a while now -- from the odd interleague scheduling to the failure of management to make the deals and pony up the big dollars it takes to put a respectable and entertaining product out on the field so they can manufacture consent to sneak away to San Jose off that disinterest and inertia -- and that's been going on pretty much for a couple of years running at this point.

Only now, they will have Big Money available to them -- and everyone and their pet panda Pablo knows that they will have it available to spend.  If they fail to build a personnel on offense this winter worthy of AAA ball and kind of sit it out or do it half-heartedly as in recent years, then the cries of "Conspiracy! Lew Wolff just wants to build a futuristic A's-themed strip mall in the South Bay!!" will get deafeningly loud... I know this, because I will be right in the middle of the histrionics, unrolling my "ART MODELL SAYS HI!" banner right down from CF over the batter's eye mid-game after alerting the press to my intentions so the cameras can indeed be rolling.  First we take Manhattan... then we unmoor the tarps and watch them fly away, like a dark cloud over San Leandro on a windy day.  Of course I am being dramatic but it's really the 500-pound elephant (sorry, Stomper) in the room at this point: standing pat when it's so brutally obvious that doing so will only exascerbate the allegations of intentional neglect, and under the increased additional scutiny the movie will bring to boot, just is not the recipe for efficacy in this case... not with tens of millions of beans coming loose into the hands of Beane. 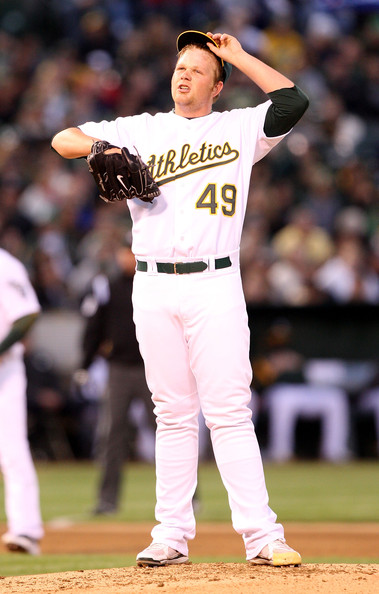 BrettAnderson49
It can't be this easy, can it? They swing at the deuce like it's a golf ball. Yawn.
all night long via 60 feet 6 inches

Then there's the movement: like a spiking Trevor Cahill sinker, the quantum development of our pitching over the last 2 years into arguably the absolute envy of the entire sport means that we have the essential element -- starting pitching being the alpha and omega of what it takes to win over the course of a season and into the playoffs -- in place and all that is required is to fashion a bat attack that can get us 4-5 runs a game for us not just to compete, not just to win... but to dominate.  I swear to God (and I don't even believe in God) I was watching Quick Pitch on the MLB Network at 3 in the morning the other day, and the highlights of another sick start by one of our young studs came on... I think it was the one game in Seattle we won.  Hazel Mae (hostess of the program) is talking over the footage and all of a sudden she blurts out "If these guys ever score some bats to go with this lights-out group of young starters, the entire American League is going to cry bitter tears of pain!"  I almost spit out my Sweet-tarts at those words... thank the Lord I wasn't into one of my late-night overflowing bowls of Lucky Charms right then or I would have had to fetch the vacuum.

All of this is obvious... if a lunatic that's barely able to string two words together without mentioning some long-defunct Progressive Rock band (Premiata Forneria Marconi!) can spot these ideas, then you know upper management and the players and the press that gets paid good money to write about these things damn sure does.  Christ, even Bob Geren can smell the taste of impending victory, and he's ready to raise his finger in a "We're Number One!" salute.  Of course for us to truly see The Promised Land and hoist the trophy he may have to be put out to pasture, but that's another barely-lucid post for another Monday... for right now, I want you all to start off your week with some Hope and Humor the Emperor with some sincere and well-founded optimism for a change, lest you all turn on each other in a collegiate cascade of cannabalistic conundrum.  Your mother and I didn't spend all that money on 4 years of this to see you fall before the finish line, you know?

Enjoy your day and I'll see you at game time.