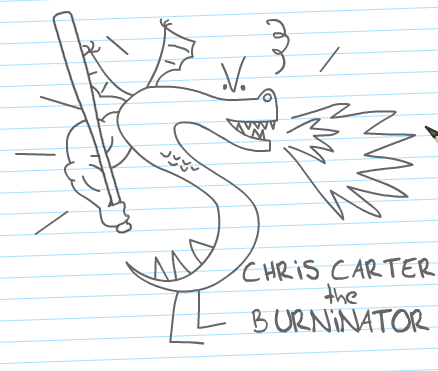 Hell hath no fury like a Carter scorned. Thankfully, he'll get a second chance to enact revenge on the Mariners from the north.

Yesterday may have been a disappointment, but we'll get another shot against the Mariners tonight. Brett Anderson (3-2, 3.14 ERA), still getting into the swing of things after being reactivated from the disabled list, will face a strong opponent in Felix Hernandez (7-9, 2.94 ERA). King Felix has been his usual sparkling self. The only problem? His anemic backing offense, which is the worst in the majors. In fact, the Mariners' offense ranks dead last in batting average, on-base percentage, and slugging percentage. Expect Brett Anderson to have some fun.

But you're not really here to see pitching, are you? Hulking slugger Chris Carter is starting tonight in his second game in the majors. I don't want to put overly high expectations on him or anything, but anything less than 10 RBI would be a massive disappointment.

A friendly helpful note to the Seattle Mariners: In the event of a Chris Carter sighting, DO NOT run away, fall to the ground, or play dead. Instead, stand your ground, yell loudly, wave your arms, make loud noises such as banging pots or pans, and put small children or Chone Figgins on your shoulders.