xBABIP, and What We Can Expect For the Second Half

Share All sharing options for: xBABIP, and What We Can Expect For the Second Half

We're just embarking on the second half of the season here, with game 85 of 162 tonight. The A's definitely had a rather bumpy first half, but Oakland is currently sitting pretty much where they were predicted to sit before the season started—at .500. The pitching is good, and it could hit levels of greatness once some key players come back from injury. But what about the offense? What can we expect from Oakland's batters going into the second half?

First off, a preemptive apology for throwing another arcane-looking "lower case first letter stat" into the fire. This one's not too bad, I swear.

Batting Average on Balls In Play (BABIP) is a stat that plays off of the principle that batters have very little control of balls hit into play. Sure, they can usually slap the ball in a general direction if they want to, and most hitters are pretty consistent about the amount of flies and grounders they hit, but other than that, batters essentially have very little control over hitting balls into gaps and such. Therefore, an overly high BABIP can indicate that a batter has been getting lucky at hitting balls between fielders, and an excessively low BABIP can indicate that a batter has been hitting balls right at fielders more often than normal.

But what is too high or too low? If someone has a BABIP of .310, should we expect better or worse things in the future? We could just assume the league average of around .300 and call it a day, but that's not good enough. A perfectly averagely lucky batter's BABIP completely depends on what kind of hitter that player is. A batter that hits only popups shouldn't be expected to have the same BABIP as one who only hits line drives. And a quick runner like Rajai Davis should be expected to have a higher BABIP than his batting profile would otherwise indicate, as his speed would allow him to beat out some grounders than most other batters wouldn't. So what is average? Well, the fine folks at The Hardball Times (Chris Dutton and Peter Bendix) created a model called xBABIP (expected BABIP) that looks at a batting profile and calculates what a perfectly average luck would do to a BABIP. Here are the results from the first half of 2010. 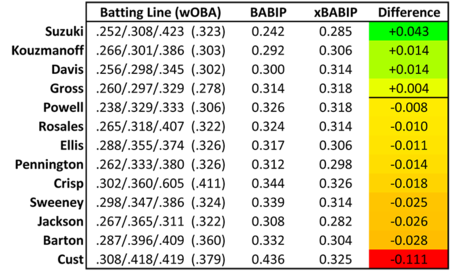 The huge red flag on Jack Cust shouldn't really surprise anyone. If you really expect him to continue hitting over .300, you're likely to be disappointed. Everyone else, though, has been pretty neutral as far as getting lucky on batted balls, with one exception—Kurt Suzuki. Kurt is truly doing something remarkable. He's basically matched the production you'd expect from his career numbers, and he's doing it with a microscopic BABIP that's more than 40 points below his career average. Kurt tends to hit a lot of pop-ups and fly balls, so xBABIP says that his normal luck-free BABIP is only .285, 15 points below the league average. But Kurt's actual BABIP is so low that even a regression half as strong as expected would have him batting .270 and slugging .450. Whatever Kurt did over the offseason, he needs to keep doing it.

The A's take on the Yankees again tonight, this time, featuring one of the marquee pitching matchups of the year—Trevor Cahill vs. CC Sabathia. The battle of the two All-Stars starts at 7:05 PM.