Share All sharing options for: Michael Wuertz is Just Fine, Thank You

I don't know how Billy Beane did it, but in February 2009, he traded Richie Robnett and Justin Sellers to the Chicago Cubs for Michael Wuertz. The Cubs went on to release both of them that year (they're currently floundering around in the Yankees and Dodgers systems, respectively), while Wuertz went on to lead the majors in swinging strikes induced (by more than seven huge percentage points) and place fourth among all qualified relievers in FIP and xFIP. Wuertz was simply miraculous in 2009, striking out more than eleven batters every nine innings while walking less than three over the same period. George A. King III of the New York Post called him a "right-handed, slider-throwing freak".

After a well-deserved contract extension (2 years/$5.25MM with a club option for 2012) and a shoulder injury that put him on the shelf during April, the slider-throwing freak made his season debut in May and...had lost everything. At the beginning of June, he held a 7.27 ERA with a K/9 around half of what it was in 2009. His sliders were hanging, unable to fool anyone. His velocity was down across the board. Did Billy just hand out money to a guy who had finished a fluky unrepeatable season? Or did he give out another big contract to a player among the many to never fully return from an injury?

Nope. Wuertz is back. Not the bad 2010 Michael Wuertz, but the slider-throwing freak of last year. His shoulder injury had some lingering effects, but Wuertz's velocity is finally back to what it was in 2009. 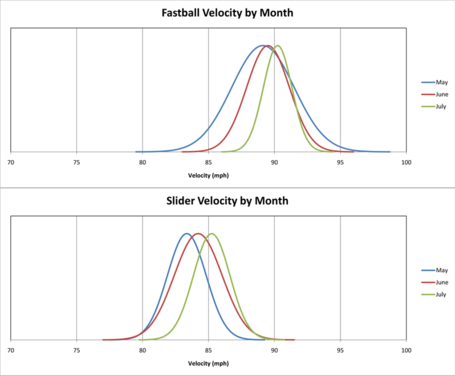 The average velocity of Michael Wuertz's pitches from month to month are indicated by the high point of each bell curve. The width of each curve indicates the consistency of his velocity, where a wide bell curve means that his velocity varied significantly from appearance to appearance. It's immediately obvious from the graph—Wuertz's arm strength is finally back to normal, and with that, his velocity consistency has returned as well.

But what about movement? Velocity is one thing, but if the shoulder injury has ruined his slider to the point where he consistently leaves them up, all the velocity in the world isn't going to help. Thankfully, that's back too. 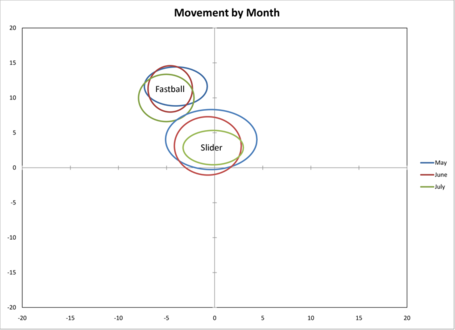 This movement chart shows all of Michael Wuertz's pitches this year, separated by pitch type and month, in terms of pitch break in inches from the catcher's point of view. Each oval has a radius of two standard deviations, which is fancy math talk that basically says that each oval is drawn so that it encompasses 95% of the pitches it is measuring. There's a small change in his fastball movement, but I'm more interested with his slider. Look at the huge increase in consistency! July's slider oval is less than half the size of May's, which means that not only has Michael Wuertz's velocity returned, his slider's consistency is back to where it should be. And on top of all that, his slider has increased its drop. He's essentially stopped hanging them, which he did all too frequently in May.

Welcome back, you big slider-throwing freak. Sure is nice to have another relief ace out there. And it couldn't have come at a better time.