wOBA Against: What If We Ignore Luck?

Share All sharing options for: wOBA Against: What If We Ignore Luck?

We've got a million different statistics for pitching. Some, like ERA, stay on the simple side, and measure one aspect of pitching (allowing runs) well. Others, like FIP, try to go deeper and figure out how well a pitcher actually pitched, and what we can expect in the future. Statistics like FIP purposefully ignore certain aspects of pitching to try to focus on the factors that are predominantly skill-based, rather than luck-based. But what if we tried to go the other way? What about a stat that is purely about measuring past performance, with no regard to luck, skill, or ability? What about a stat that doesn't care if a pitcher's hit rate on ground balls is unsustainable in the future? Luckily, we've got just the thing.

Well, sort of. What we can do is repurpose an offensive stat, wOBA, and use it for pitchers. A quick refresher—wOBA takes offensive events like walks, singles, doubles, triples, and home runs, and weights them with numeric values relative to their actual worth. Sure, a bloop single is sometimes just bad luck, but let's throw all of that out of the window for now and focus on the actual results. For all Oakland pitchers with more than 100 batters faced, here are their wOBAs against. 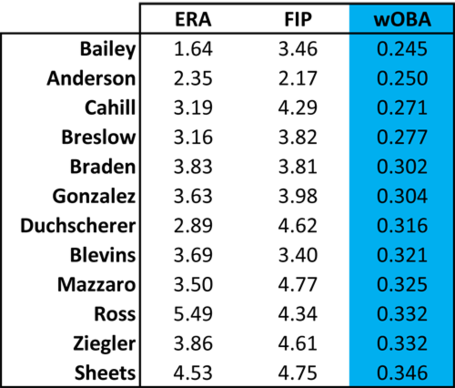 Andrew Bailey's wOBA against is .245! He's essentially turned the batters he's faced into a lineup full of Everth Cabreras. Or Jack Wilsons. Even Yuniesky Betancourt has never put up numbers that low in any season. In fact, we've got four pitchers who have turned their opposition into a replacement level scrub: Bailey, Anderson, Cahill, and Breslow. And three of those four are likely to be building blocks we'll see for a long time.

The A's attempt to come off of the floor swinging as they face the Red Sox at 7:05 PM. Dallas Braden is scheduled to make his first start since coming back from the Disabled List, and he opposes knuckleballer Tim Wakefield.