Live Report From the All-Star Week - Pictures from Pepsi Refresh

Share All sharing options for: Live Report From the All-Star Week - Pictures from Pepsi Refresh

This year, the All-Star game was practically in my backyard, as all the commercials tried to tell you, so I thought it was important that I go. I went to both the Home Run Derby and the All-Star Game, and even had a chance to pop in to the Pepsi Refresh Project, where Andrew Bailey and some of his fellow All-Stars were helping to paint a mural at the El Salvador Community Center.

I have some pictures: 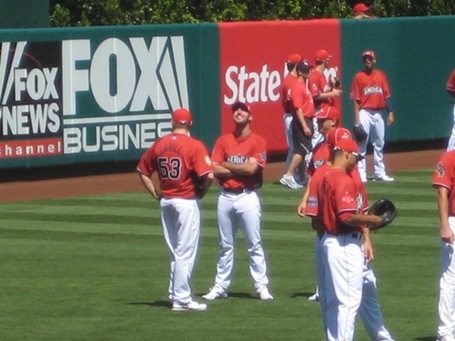 Here are our boys, watching BP before the HomeRun Derby. 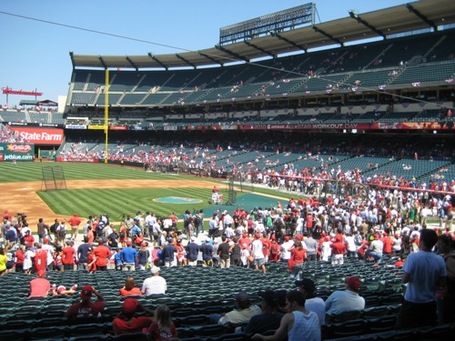 Here is the media crush before the Home Run Derby 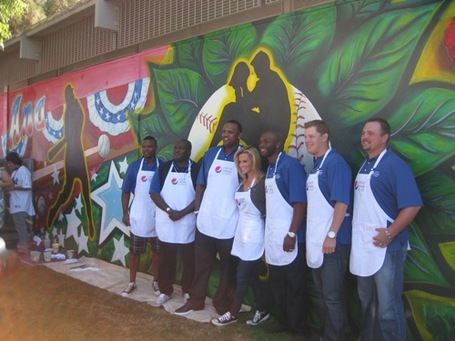 Here is the MLB Pepsi Refresh team. This event kicked-off a larger initiative with 15 MLB teams competing for a $200,000 Pepsi Refresh Project grant to help their local communities. The A’s and Andrew Bailey are hoping to use the grant to build an adapted sports field and community park for differently-abled people with the Miracle League of the Alameada East Bay. You can vote for Bailey at www.mlb.com/PepsiRefresh or by texting A-T-H-L-E-T-I-C-S to 76462 now thru August 17.

I have some more pictures: 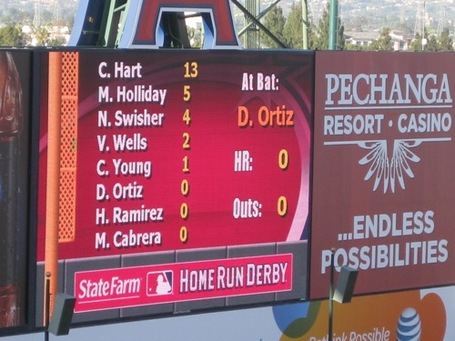 Here is the scoreboard before Hanley and Cabrera knocked off Holliday in the first round of the Home Run Derby. 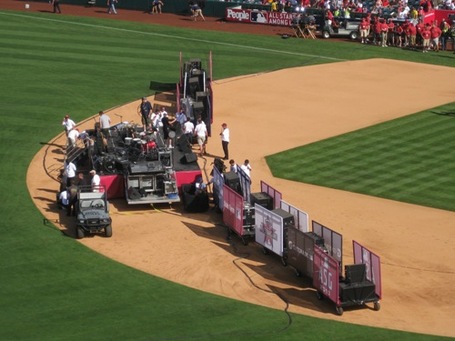 Here is the stage, right before Train came out and sang the Angels' theme song. Not my favorite part of the evening. 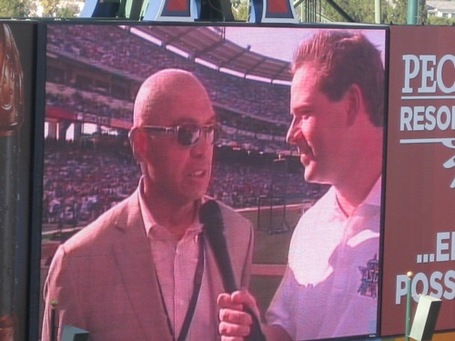 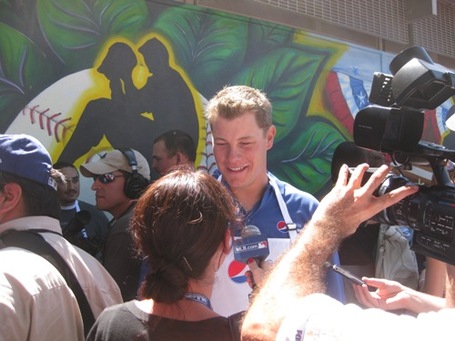 Here's more of Bailey being interviewed for his Pepsi Refresh Project. 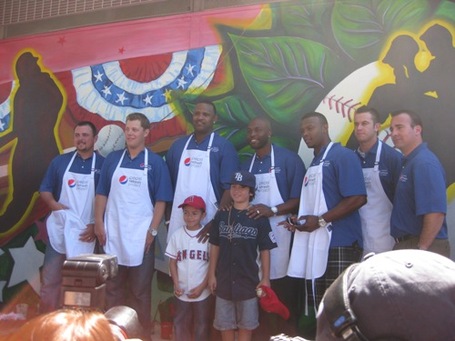 Here are the players with a couple of the kids from the community center. I had a chance to speak with Andrew Bailey briefly at the event; I congratulated him on his ASG appearance from AN, and asked him who he would most like to face in the game. He answered "Ryan Howard", but he said that honestly he just wanted to get IN the game this year. And he did. I'm sure he was thrilled. He also confirmed the use of "The Dactyl" as Trevor Cahill's nickname, and that yes, Cahill was also thrilled to be a part of the festivities. 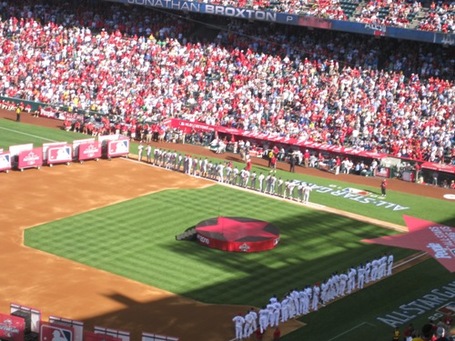 Here are your starting lineups for the 2010 All-Star Game. 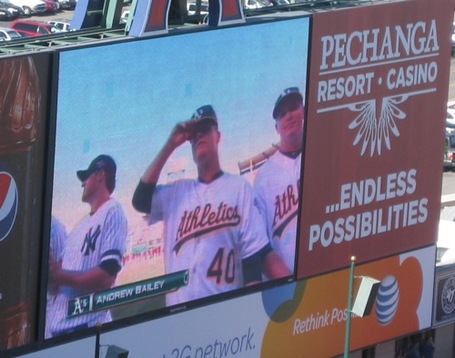 The A's are represented with not one, but two players! 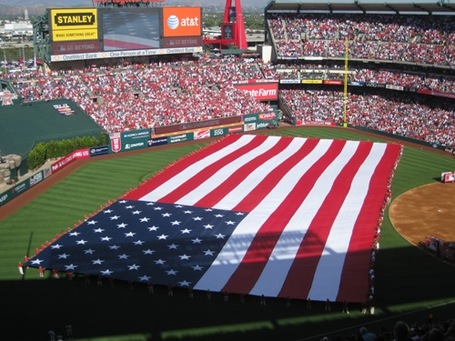 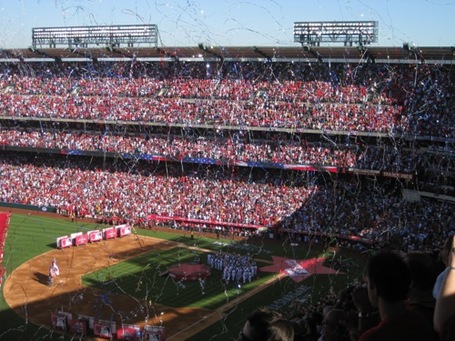 Side note, during this wild opening ceremony, we went out to the concourse to get some food and something to drink. We noticed that the usual vendor umbrellas were missing, and we were told that Bud Selig removed them (hearsay and conjecture); as the didn't fit into his ideal stadium look. It was well over 90 degrees up on the cement and the vendors were wilting under the sun. I thought that was an interesting move. 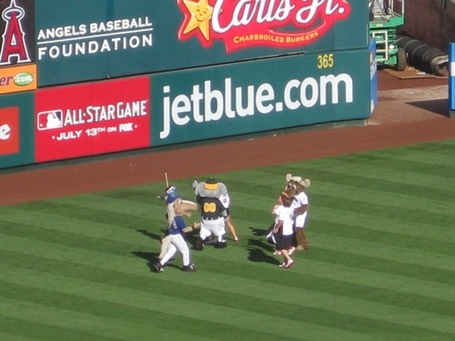 Even Stomper had friends to pal around with.

As for the game itself, I have to say I was disappointed in the last at-bat. Great game, but I thought Joe used the wrong Yankee at the wrong time. I disliked the Hughes call; when you have at least three closers on the bench and a one-run lead, USE THEM! Obviously I also hated that (and can't figure out why it happened) A-Rod was left on the bench. How do you not use one of the best homerun hitters in the game when all you needed was a homerun? And he's on your own team! And the Yankees took apart Broxton the last time they saw him! Do. Not. Understand. I'm not a fan of A-Rod, but I like winning, and I thought he gave the AL the very best chance.

But overall, I was thrilled to see Bailey pitch in the game, and I thought he represented the A's well. I also loved seeing the variety of baseball fans--from every team--in the stands.

An amazing experience if you have the chance to go (and if you can pick one event to attend, always pick the game); I hope we represented the A's well.