Two months ago, I talked about Trevor Cahill and that he had increased the amount of sink he was able to generate, particularly on his new curveball. But back then, I only had one 2010 start to work with, and his new and improved pitches didn't exactly translate into good results (5IP, 7H, 6ER, 1BB, 3K).

Man, oh man, have things changed. Since that first start on April 30, he's compiled a 2.31 ERA in 11 starts, which was capped with Saturday's astounding ten strikeout performance. So what's changed, and how did he do it? I don't think I have a definitive answer, but I have an idea. First, I'll run through the results of this outstanding turnaround, then, I'll float a possible explanation.

All of his peripherals have increased. He's striking out more, he's walking less (his BB/9 is actually the lowest it's ever been for him throughout his entire professional career, even including rookie ball), and most importantly, he's inducing more grounders than ever before. His line drive percentage is one of the best in the majors. And to top it all off, he's trimmed his home run problem substantially, by giving up less fly balls and giving up less home runs on the fly balls he does allow. If this is the Cahill that prospect reports dreamt of, consider me impressed.

Now, my explanation? It's his pitch choices. Last year, he essentially threw an equal amount of fastballs, sinkers, and changeups, which added up to 90% of his arsenal. How can a pitcher fresh out of AA hope to reliably get major league hitters out without a breaking ball? This year, he's thrown a vastly different arrangement of pitches. Incredibly, he's thrown his sinker more, almost 50% of the time, with the other half equally distributed between his fastball, changeup, and new curveball. And last Saturday? Almost 70% sinkers and 20% curveballs, with a mere handful of fastballs and changeups. 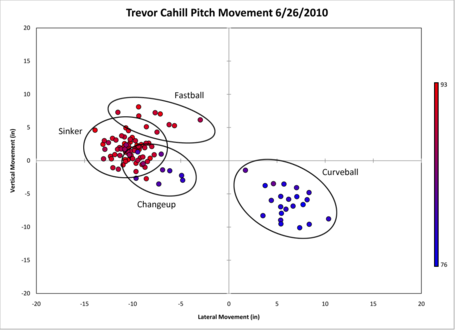 From a guy who stopped throwing his curveball halfway through 2009, this new confidence is great to see. In a few months, he's achieved such a sense of comfort with his new curveball that he's been able to throw it for strikes and improve his control to a level he's never had in his entire career. That's simply incredible.

The A's are in Baltimore for the next few days as they kick off a three-game set. Dallas Braden will try yet again to get a win after his perfect game as he opposes Brian Matusz at 4:05 PM.