How Much Roster Turnover is Too Much?

Share All sharing options for: How Much Roster Turnover is Too Much?

Update (10:15 AM): And just like that, we've got another move. The recently DFA'd C/OF Jake Fox has been traded to the Orioles for RP Ross Wolf. Discussion is happening here.

I was looking through my closet the other day, and found a giveaway that the A's had in 2008. Just a regular standard team portrait (with a terrible 100% Baseball slogan on the back). I'm not exactly sure when during the season the photo was taken, but I'm sure some roster genius can figure it out. No, what really struck me was the huge amount of lost Athletics there are in that picture. Two little years, give or take a couple months, and a full fifteen of the thirty A's in the picture have moved on. Half. 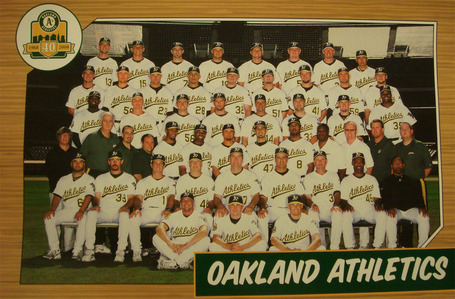 Now, I know the A's experience more roster turnover than most teams, but the magnitude of that turnover never really hit me until now. Last week, we faced Carlos Zambrano, who had faced the A's back in 2004. Aramis Ramirez and Derrek Lee have been in Chicago for years and years. You know how many current A's faced the Cubs in 2004? Three. Eric Chavez, Mark Ellis, and Justin Duchscherer, and I'm not really sure that you can count two of those. In fact, aside from those three players, we don't have anyone else on the roster that wore an Oakland uniform in the ALCS in 2006. We've got one thirteen-year vet (Chavez), one nine-year vet (Ellis), an eight-year guy (Duchscherer), and that's it. Everyone else who has made an appearance with Oakland in 2010 has been on the team for, at most, four years. I know that every team has their Tommy Everidges and their Danny Putnams and their J.J. Furmaniaks (batting like he's never batted before), but is getting rid of half of your roster in two years even close to being remotely normal?

Trading Nick Swisher for Ryan Sweeney, Gio Gonzalez, and Fautino de los Santos was a great move. From a purely win-oriented perspective, it was yet another large and colorful feather in Billy Beane's increasingly peacocky cap. But what about the casual fan? I can't tell you how many times I've been asked by an exasperated casual fan where Swisher went. And where Haren went. And where Mulder went, even. Is it really worth it, in the end, if casual fans don't recognize a single player on the team?

After last night's heartbreaking/frustrating/mind-blowingly silly loss to the Reds, the A's try to climb up off of the floor tonight as Dallas Braden faces Bronson Arroyo at 7:05 PM.