Share All sharing options for: What's Gotten Into Trevor Cahill?

No, really, what's happened to him?

Now, I'm not going to consider any of this set in stone, because there's always a real possibility that the PitchFX cameras in Toronto were miscalibrated. But take a look at his movement chart from last Friday's start. (Click for a bigger version.) 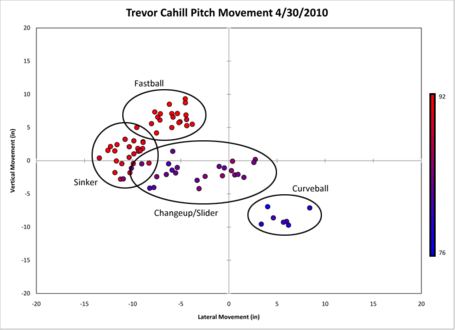 To reiterate, this graph shows every one of Trevor Cahill's pitches and their movement, from the point of view of the catcher. A pitch at (0,0) where the axes cross would represent a perfectly spinless ball, only affected by gravity. I did something a little different this time around, and colorized each pitch based on velocity. Pure red was set at his fastest pitch, and pure blue represents his slowest. Rather than use color as pitch identification, I just roughly circled different pitch groups.

For comparison, take a look at some of his movement charts from last year. Unless the cameras in Toronto are completely out of whack, Cahill has made some serious adjustments after last year's terrible campaign. He's exhibiting a very large increase in sink among all of his pitches, ranging from an inch on his fastball to three on his sinker and five to six on his brand new curveball. For a sinkerballer, increased sink is always a good thing, as it leads to more groundballs.

Of course, last Friday's start didn't exactly go very well for Trevor. It looked to me like much of his troubles came from pitch location, rather than movement. He was constantly leaving balls up in the zone, which is a huge no-no for any sinkerballer who relies on groundball outs. Much like Brad Ziegler, if Cahill is allowing fly balls and home runs, something is wrong.

Every Trevor Cahill scouting report I've read made special mention of his "heavy" fastball, with some calling it "toxic" and "deadly". If he can control this increase in sink and stop leaving balls up high, he should definitely be in line for some improvement on his dismal 2009 season.