Let's see...Landon Powell stole a base, the A's blew three saves, Tyson Ross had an at bat, and Eric Chavez hit his first home run since June 17, 2008.

Trevor Cahill was wild, but effective enough in his 5.2 innings of work. He had just enough control that he wasn't walking guys 4-0 (much), but not enough to be all that good. Thankfully, his sinker and changeup were moving around so much that he was able to generate 12 ground outs. Half of the damage he allowed was on a cheapie Arlington home run that David Murphy placed in the right field seats. It can't have been much more than 330 feet, but in Arlington, that's enough.

The craziness started in the 8th when Brad Ziegler hit Michael Young and promptly served up a changeup to Josh Hamilton, which he parked in deep right-center. Blown save number one. Thankfully, the A's unleashed their patented Singles Offense and peppered the Rangers to death with a BB gun. The A's led 5-4 going into the bottom of the ninth. Time for Mr. Automatic, Andrew Bailey, right? Wrong. Bailey was just bad enough to give up the lead, which sent the game into extra innings. Blown save number two.

One problem: Bob Geren had replaced Eric Chavez for pinch runner Gabe Gross, and had replaced Eric Patterson for pinch hitter Jake Fox. Now, in extra innings, the choice was to either put Jake Fox in LF, or lose the DH altogether. Geren wisely chose the latter.

Of course, this wasn't the end of the wackiness. Daric Barton homered in the top of the 11th to send the A's to a 6-5 lead. Tyson Ross was, again, just bad enough to give Texas one run, but not the win. Blown save number three. The game rolled on.

In the top of the 13th, Landon Powell walked to lead off the inning. Believe it or not, the Kneeless Wonder managed to steal a base (the throw was wide and Powell managed to slide between Elvis Andrus's legs). It was his first Major League stolen base, and only his second in professional baseball. Landon was almost thrown out at 2B, but, again the catch was miffed. Fittingly, he scored when Ian Kinsler flubbed a tough hop. It proved to be the difference, as the A's finally managed to hang on to the lead.

I really can't do this game justice, but I hope this will (via Fangraphs). 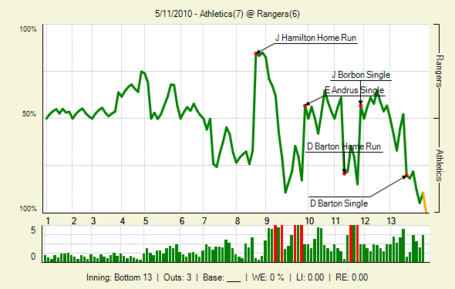