Share All sharing options for: Just Another Magic Monday 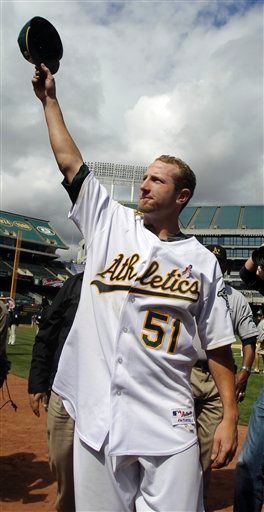 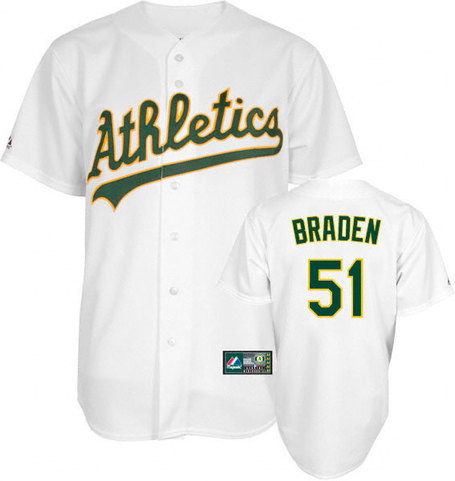 Once upon a pantomime so kind, there was a time and a time to rhyme.  A time to rhyme and chime a fine line in my mind about a clime where sometimes there's slime and even some crime called the two-oh-nine, Frankenstein.  Can you spare a dime and find the time to climb on blind and dine behind these designs of mine?  The summertime signs refine to shine sublime. 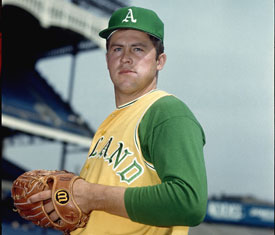 But wait -- let's recalibrate the state of the slate to Nineteen Hundred and Sixty-Eight: when cityscapes did conflagrate, and the citizens did not hesitate to demonstrate all the way up to Watergate to agitate to obliterate the hate of the profligate potentate who'd have them wait at the gate whilst Justice went out of date.  And the date was May 8, 1968 and it was as great as a skate with your vertebrate mate when Jim slimmed the Twins for the initial win of purr-feck-shin.  And a spate of unabated great did initiate, soon to culminate in a triumvirate to make the unsated Caliphate salivate. 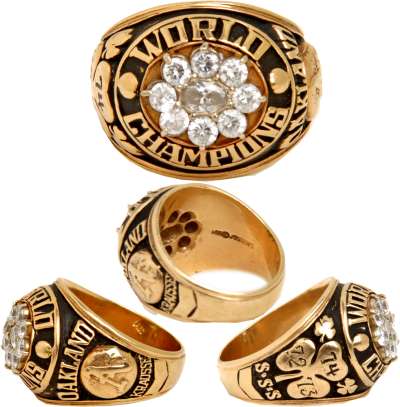 Not pictured: store-bought "dynasties" of the last 35 years and the "all-sports networks" who love them.

Steer a few years clear, have a beer, and the sheer sphere of the austere career becomes clear if we persevere here.... no jeer could interfere when Rickey first struck fear you could hear in the cheer for second gear.  The charms of arms, the need for speed, the stunts of bunts: all the brawl, sprawl and tall gall of Billyball. 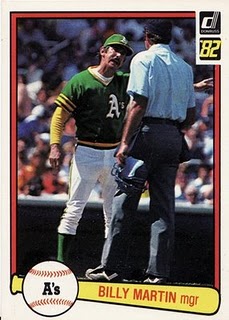 A fond decade on and gone upon the Farallon swan, we crash the stash and bash for cash while our guys try to fly pie in the sky through the camel's eye.... the pains and stains of ill-gotten gains seizing the reins from untrained mains whilst wheedling needles threshed the flesh of players grayer with the fleeting bleat and effete heat of the unsweet cheat.  This clever endeavor will forever sever the gone bonds of busted trust, when drugs were chugged by lugs like bugs and muscles bustled with the musty musk of the hustle... the risky disk in besmirched search of a tsk-tsk asterisk. 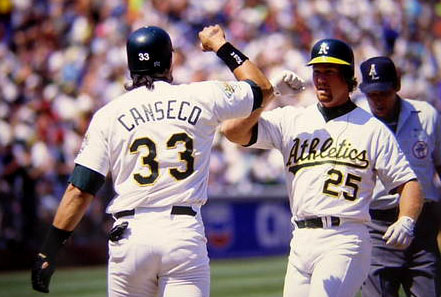 Sometimes, our need to investigate any advantage innovates in unintentional, and not altogether wholesome, ways. 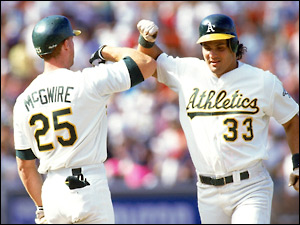 But put the brakes on the mistakes, for the ring's the thing and all is fair in your underwear.... it's ten bends hence and our friends are at it again... with mystic statistics and split-digit heuristics to circumvent the overspent: the admonition of attrition switchin' the definition of competition, despite the frightful spite, plight and mighty slight (the unattraction of the contraction faction) led by the Commish and his lead-hard head that left us for dead.  Kept serene and mean by the sheen of a three as big as a tree and free to gold the green for big-screen Beane, the team gleamed and beamed to stock the October flock whilst checking the director's vector for bitchin' pictures and a hit for Pitt.  Our boys gave us joys beyond toys, and for antiques of weeks we will speak of the complete peaks of The Streak. 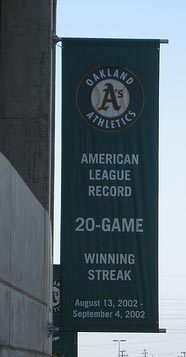 Every year someone will win the World Series.  Other things are more, shall we say, unusual.

I've imparted my art and we're back where we started to depart, 42 years time (plus a day to say that Mom is the bomb with the calm when there's cause for harm or alarm) and on a line to the turpentine-wine-and-lime rhymes of the 209.  A life of strife, the pangs of gangs and the feet of the beaten streets calling the brawling bawling to an appalling falling... where only the driven are given a livin' and the meek and weak geek and freak, springing a leak like a strained oblique. 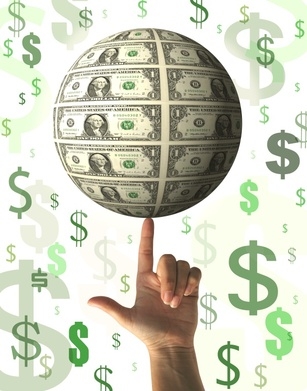 Dallas Braden spins the AL on his finger, whilst EN hides from the most obvious visual pun in Athletics Nation history.  Meanwhile, his subconscious tries in vain to invent artful ways of making sure AN gets so many hits on Monday that the whole internet crashes, Stockton is declared the capital of California and A-Rod is forced to admit that Dallas got to the Hall of Fame before he did.  Moneyball.

OK, more perverse verse about the greatest, most enter-F*ing-taining team you could ever ask for on $43.76 or whatever our payroll is.

The card is hard with the shards of underachieving and peeving petards: the economy's ergonomy hangs like the taxonomy of ignominy over the domes of the gnomes in the homes made of stones and old bones.  The masses sit on asses and look for their glasses as the frame of fame cracks some slack off the back of the rack; a window, hopin' to open if the taken can start shakin' their bacon and put some meat in the seats, appraises the ways to better days of bubbly sprays and bigger digs to clog the hogs who flog their smoggy logs with purchased cogs to wheel their deal and unpeel their unfeeling spiel.  And a gaggle of haggled stragglers begins to come in, beating their chests at the behest of the best of the rest.... the leftover clover rises and surprises, and the ephemeral emerald fancy pants get one last chance to dance to romance.  A city too quickly big on pity must swear to care or stare, barely aware, as the Elephantaire bear tears for elsewhere, leaving grieving for the thieving and sorrow for tomorrow in the five-ten yet again. 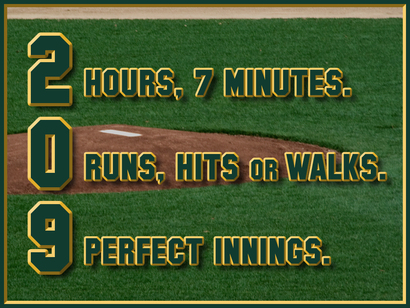 Moments of pleasure to treasure forever.

So the way of the day is a question of ingestion: can the O finally crow and show it can flow to The Show?  Will the East Bay say hey! Send some thickets of sticky tickets this way!  We should not be bumming cuz summer is coming and the bumblebee's humming a reckoning, beckoning posteriors to the Coli's inferior interiors for one last burst of baseball thirst.... the ballast of Dallas Braden, laden, unfadin' and providing the chiding, so don't you be hiding or the pine you'll be riding like aluminum siding. It's about getting loud and proud in the crowd.  Please come out and get down so The Town will not frown like a clown and our tight bright white fleet cleats -- a legacy of supremacy embossed with boss toss -- won't get lost in the sauce.

I dreamed a dream.  We are the steam.  This is our team.  You know what I mean. 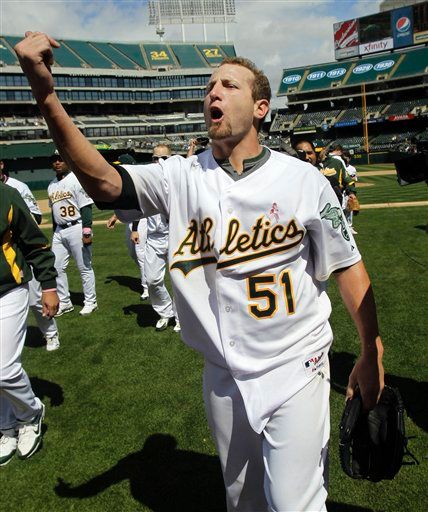 Before I go on I want to thank Dallas Braden for yesterday and for being himself: his achievement, so rarely rivalled amid the ages, stands in history. 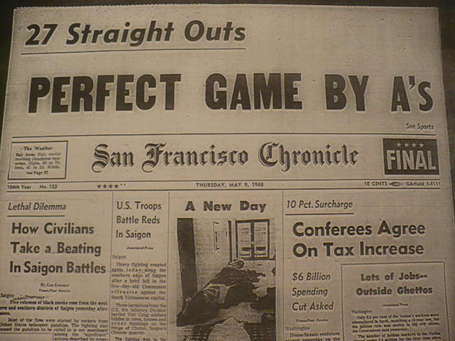 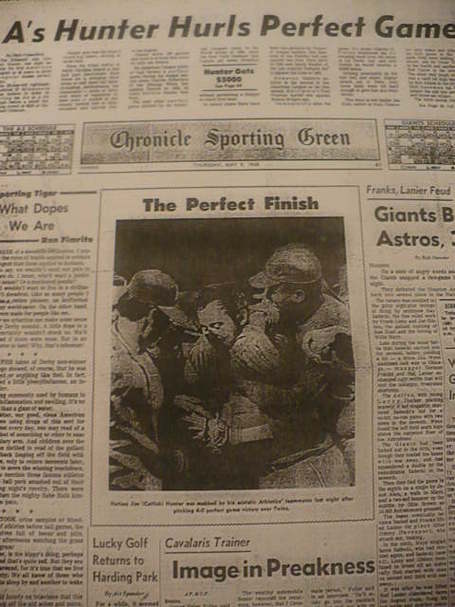 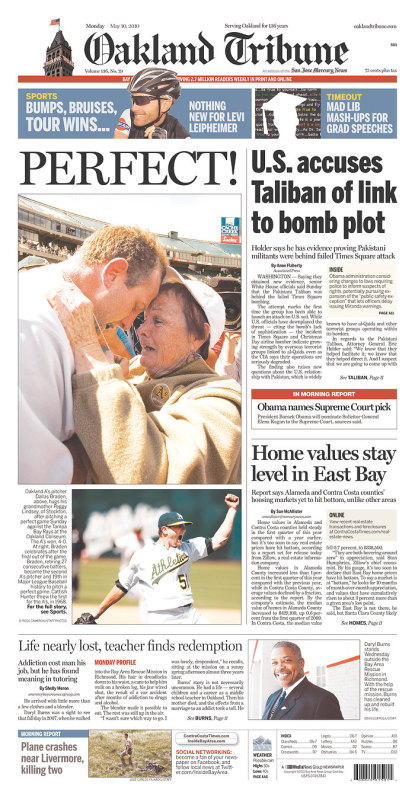 Note to AN: with increased scrutiny and attention comes increased responsibility to keep it at a level of discourse worthy of this utterly-definitive-even-when-they-suck (and about the most riveting thing in sports when it succeeds, which is often in the grand scheme of things) franchise, so we ask that you examine the latest updates to the Community Guidelines and observe them accordingly as you post until your fingers explode and your monitors bleed green and golden droplets of perfection no team that just pollutes the sport with phony purchased championships and rosters full of guys with entourages bigger than a Tuesday night Coliseum crowd can even hope to match, free parking or not. 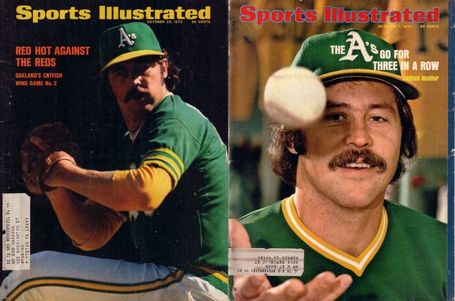 Note to East Bay and Oakland from the 209 to the 510: You hold something so precious, so unique, so untouchably irreplaceable in ways that only its going may ever fully illustrate to you.  It does NOT have to come to that: in this case only YOU can make the sun come up.  If this is truly the city that holds the mantle of what arguably is the most successful and instantaneous social revolution in human history, and with it the infernally eternal spirit of the Panther, then in the most inclusive, apolitical way I say All Power To The People:  a window is about to open and you must stop whining and represent FULL FORCE.  Like Dallas just demonstrated, you CANNOT listen to the naysayers and let them define your talents, which are many. The whole world will be watching. Speak now, or forever hold your teamless, dreamless peaceless sleep.

Back to basics, folks: Not that I don't adore Le Grande Orange (even met him once and told him so), but this ain't the Montreal Expos. I thoroughly and absolutely respect the cities of Fremont and San Jose and the right of Lewis Wolff to make money.  I even want the Sharks, and the Earthquakes, to win.  I only ask this: Let's build this from here and step up to Town Business and what we all know we can be, all hands on deck and no excuses anymore. 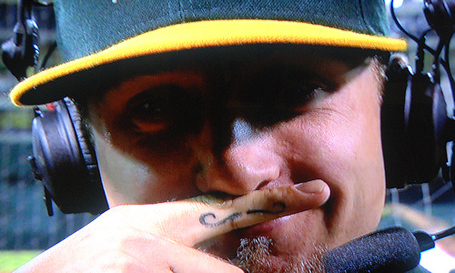 Now (after you have got on the BART and trod upon the Bridge to Destiny, and scored thyself some tix for the next homestand at the Coliseum box office, open all day until 6 pm/4 on Saturdays/closed Sundays so NO EXCUSES please) enjoy what might be the most fun day off in Oakland Athletics history, and give thanks for what we have here and what has always been here: a team and a franchise truly like no other and something to be so very, very proud of today and every other day we get to breathe this air.