Defensive Numbers: How Do We Rate?

Share All sharing options for: Defensive Numbers: How Do We Rate?

I wanted to spend some time today focusing on the defensive side of things. I know most of the focus has been on our offense and sparkling pitching (very deservedly so), but I've got a couple things about our defense that I wanted to talk about.

First off, Justin Bopp over at Beyond the Box Score has done some great work with fielding visualizations (I'm talking about his TargetView graph). I decided to create a similar UZR chart that shows the defensive capabilities of our starters. 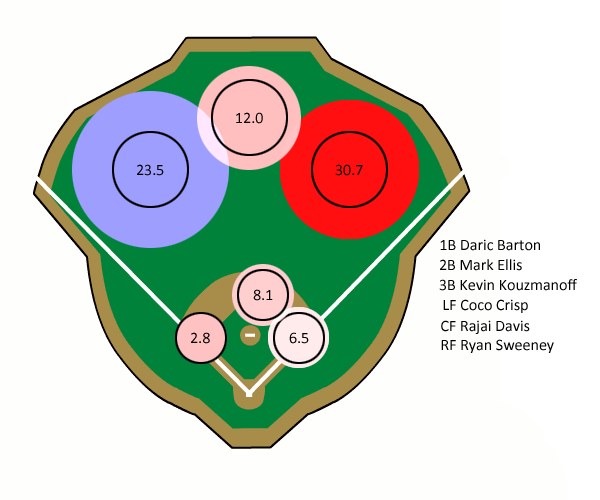 Aside from being a lot uglier than Bopp's, my chart uses a different method of visualization. The size of each colored circle represents the range of each fielder according to UZR, where the black circle is the range of a league-average fielder at that position. It's important to note that the radius of each circle is not indicative of actual range on the field--in other words, it doesn't mean that Mark Ellis can scoop up any groundballs in his circle on the chart. That being said, the scale of circle size is held constant among all infielders (outfielders are on their own, also constant scale), so that you can see that Mark Ellis and Daric Barton have a roughly equal range advantage over their positional peers. To put it another way, the circles on this chart do not mean that Rajai Davis has less range than Coco Crisp. Rather, it means that when you compare Coco Crisp to the league average left fielder and Rajai Davis to the league average center fielder, Crisp's advantage in range is roughly three times that of Davis's, because they're being  held to different standards.

The color of each circle represents everything else that UZR tracks. For infielders, this means errors and double play abilities. Outfielders get errors and UZR's arm rating. For the colors, I set pure white at league average, pure red at 10 runs above average, and pure blue at 10 runs below average. Again, these numbers are relative to their positional average, not to each other. I also added UZR/150 numbers into the circles, to give a total estimate of a player's defensive contribution, prorated over 150 defensive games.

We really have a pretty miraculous defense. Upon the return of Coco Crisp, our outfield will quite possibly be the greatest defensive outfield in the majors, featuring not one or two, but three legitimate center fielders. The infield is no slouch either. Barton and Ellis are huge range guys who also happen to be above average in errors and double plays. Kouzmanoff has less range than the rest of our infield, but partially makes up for it with his stellar error rate (only three last year). Most scouting reports seem to love Cliff Pennington's defense at shortstop (raving about his arm, in particular), but his extremely small UZR sample size forced me to leave him out altogether.

The other item I wanted to briefly discuss is the return of Coco Crisp. When he gets off of the DL, he simply must play left field. Here are his career UZR numbers in LF and CF, with Rajai's CF numbers for comparison.

It's simple--Coco Crisp is an excellent left fielder. He's not nearly as excellent in center field, limited mainly by his arm. Rajai, on the other hand, is terrific in center field. Moving Rajai Davis to left field would make him a stupid good left fielder, but what's the point when you're settling for less than terrific defense with Coco in center?