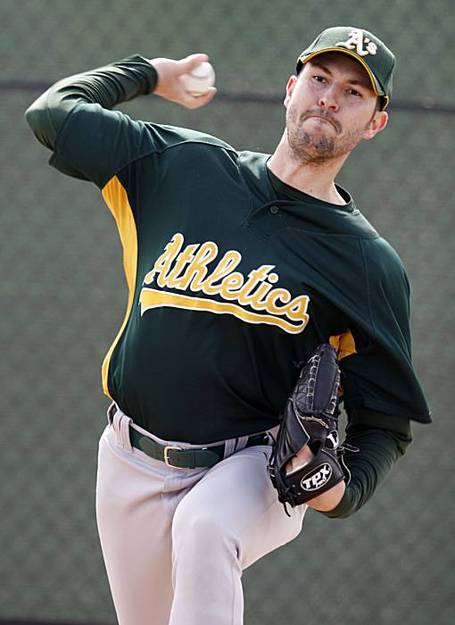 But one glorious fifth of our Hipper Than Hip rotation.

Wuzzup, Benevolent Denizens of the FIP Sector? It's time for some afternoon baseball stylings as your thoroughly inexplicable (and loving it), first place after one week, high-ridin' Athletiques take on their AL West foe Seattle in the Mariners' home opener at stadium-envy-inducing Safeco Field in beautiful Washington State.

The A's, 5-2 after two series wins vs. their intradivisional rival M's and the hated San Bernadino Angels of Ranchos Palos Verdes, send right-handed Maestro Justin Duchscherer to the bump for a rematch against Ryan Rowland-Smith, an Australian pitcher who has one more hyphen than Duke but pales in any other possible comparison... in their first meeting in the 510 last week, each got a No Decision as the A's won on Kurt Suzuki's walkoff two-bagger over the head of fan favorite Milton "Don't Tase Me" Bradley in the bottom of the 9th.

The A's have confounded the haters so far by using a balanced attack, featuring timely hits with just enough power.... but as we know the butter will be breaded this season by the pitching, which has been excellent for the most part and has given us a chance to win every game... indeed, the A's could be 7-0 as easily as 5-2 right now.

OK, it ain't a police investigation without some lineups

All right, I am awake and here to post more threads for everyone to play in, so have a blast... we have a good shot to put some bad April thoughts in all the M's heads today and it's always key to set the tone of a series from the 1st game... you know it's true. Everyone have a blast and LET'S GO,