Artest Pattern: Will Milton Bradley Be the M's Downfall? A Report from LF.

Share All sharing options for: Artest Pattern: Will Milton Bradley Be the M's Downfall? A Report from LF. 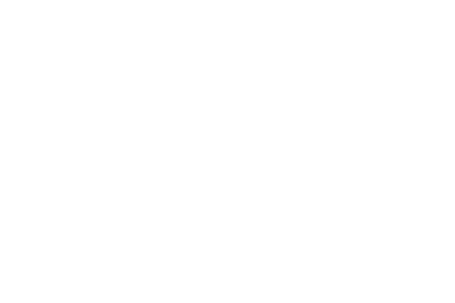 Mariners LF Milton Bradley shows off his personal sense of responsibility for his own actions. 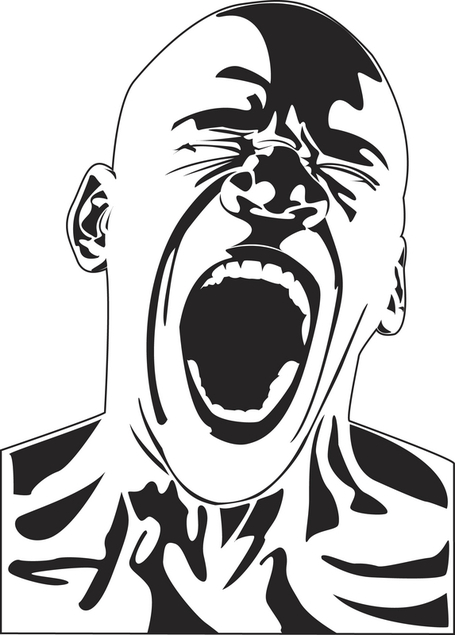 I debated whether or not to relate this in all its gory detail, but it was such a memorable and even life-altering experience for me that I thought I would, even though I still have a million conflicting feelings about what happened and what I went to the Coliseum to do last Wednesday night. 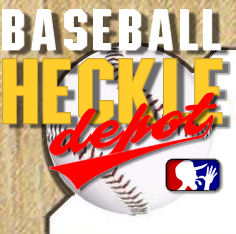 Let's begin by saying that this was the first time I have actively heckled a player since 2000 (last time was Albert Belle, weeks from retirement, at Shea in NY, Mets vs. O's.... where I first heard the all-time classic, shouted aloud by an obese and inebriated NY'er and unashamedly borrowed for last week's occasion: DAT'S RIGHT, JOEY -- TEN FINGUZZ, NO RINGS!!!!!), and the very first time I have ever done so at an A's game.  To be honest, it isn't appealing to me, ever, to be abusive just for the sake of it and it's a part of my nature as a human being that can make me extremely unproud to be myself at times, so I work hard to de-emphasize this aspect and treat everyone I come into contact with with respect and accomodation, despite the occasional and overpoweringly reactive inclination to the contrary.  To me, the highest values are those of Compassion and Hospitality... the latter operative in our world as applies to this situation as How We Treat Our Guests, which always goes a long and profoundly illustrative way towards demonstrating who we are as people if you ask me. 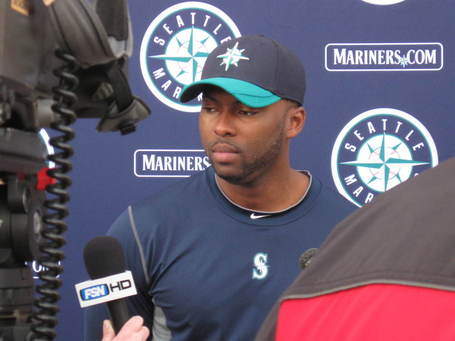 A pensive Milton Bradley explains to Seattle beat writers why the melodica is his least favorite instrument, even if they do teach kids music on it in Norway.

When Chazz B. Free (esteemed roommate who had nobly volunteered to go on a box office run) phoned from the Coliseum to let me know that we were in the bleachers, I got to thinking.  Immediately it flooded my mind that the Mariners possess perhaps the only player in all of baseball (the self-declared Ron Artest... and Kanye West!!! of the sport) who would possibly allow interaction with the fans at an opponent's venue to detract from his attention to the game... further floodwaters ensued, with my consciousness positively careening from pillar to post like a metal ball in a Pachinko machine when it dawned on me that I could, with an early enough arrival time and proper positioning, guarantee that this person would fall within earshot of my every word for the duration of the evening's event. 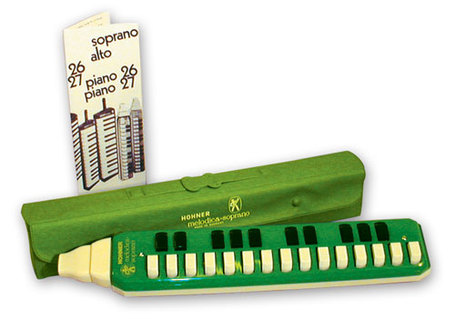 My mind was racing like warmups at Indy... what should I do?  What can I do to make myself noticed, yet at the same time make a big, ugly, 6 foot 2 eyes of blue 220 pound maniac like myself seem fundamentally unthreatening to the other fans in the bleachers, who would bear witness to my extraordinarily loud bellowings and whom I wished to have on my side as I engaged in my own peculiar brand of questionable behavior.  Then it hit me... like an Adam Rosales laser followed by a brisk sprint around the bases, it hit me. 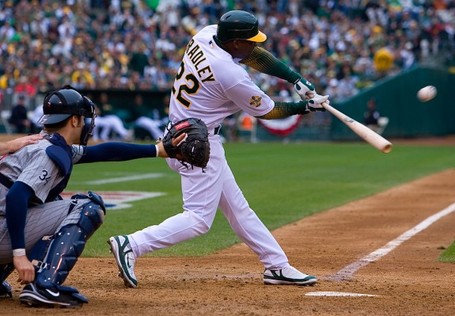 No, I haven't forgotten the good times.

On the train with Chazzy, melodica in tow, I started to question whether I could go through with it.  I began to reflect on days gone by... days like, oh, October 6, 2006... days like that sprang to mind and I had twinges of doubt about heckling a player who, despite his obvious and well-detailed personal failings, had given us many substantial thrills on the field and I had serious cold feet for a moment.  Pretty much the moment it took me to remember this accusation, leveled on his way out of town... then it was on. 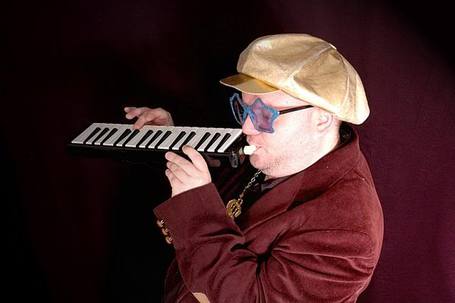 I gotta get me some fly star glasses and a velour hat for next time, I swear.

We got to the Coli and Chazz and I split up, with me heading up the hill to leave my other roommate's ticket at Will Call... little did I know I would not see Chazzy again until the end of the game.  I went up to the LF bleachers and looked for him unsuccessfully, then did the same in the RF bleachers with the same result.  Undaunted, I managed to secure three seats in the front row of the LF bleachers, right above where you-know-who was gonna be.... this, thanks to three absolutely awesome young kids, who let me grab them (the seats, not the kids!!! What kind of guy do you think I am??!!) once I asked if they were taken.  These kids, bless them, were to provide a vital element of what was to come, and make the whole experience for me the watershed it was to ignite between my ears as the night progressed. 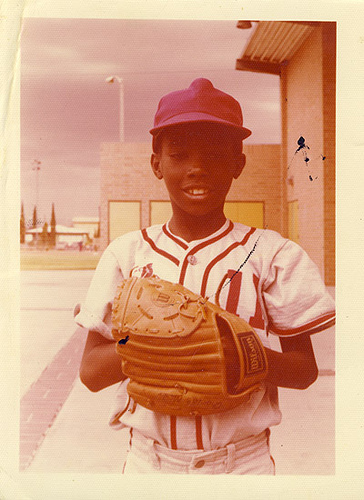 Kids, baseball, and grown-ass 43-year-old men shrieking their heads off like an orangutan on meth: they go together.

These kids were unescorted, very sweet, and a tremendous check on me for the entire night, as I navigated in my own head exactly how I could maximally get in Bradley's head whilst not detracting from their enjoyment of/identification with the game... in essence I had to keep my carrying on within fairly narrow boundaries, as this was a scene which amounted to a (large and intimidating if you don't know me) white guy yelling at a black player (and one who has had racially-tinged incidents and comments before) in front of three impressionable African-American youngsters.  During the evening I had so many thoughts and impressions of these kids, not the least of which was that they represent a demographic largely untapped by the A's marketing department, even though there are literally thousands just like them waiting to engage with baseball on a lifelong basis mere spitting distance from our current ballpark.

There was quite a lot of tightrope to tread, so I spent much of the time merely razzing MB with just his name, in the classic gruff-toned heckler voice BRADLEYBRADLEYBRADLEYBRADLEYBRAAAAAADDDDDLEEEEEEY!!!!  Occasionally I would add in pointed character analyses (LOL) like BRADLEY YOU ARE A SOCIOPATHIC BUM and WHO ARE YOU GONNA BLAME THIS TIME BRADLEY???, but for the most part the lads kept me cool and tastefully on point, with no mention of the wife-beating or the racially-accusatory stuff that might have taken it into inappropriate waters.  Before and during each blast of volume at Milton I would blow some terrifying and discordant chords on the melodica, just to add some unusual spice to my heckling and try to give the guy pause to wonder just what the heck the plastic thing was the guy in the bleachers was blowing into.  MB, for his part, did his usual thing, gesturing at me behind his back all night and at one point turning between batters to face me, take off his cap, and pretend to comb his hair very ostentatiously.  When Raj HR'd atop the LF out-of-town scoreboard, MB retrieved the ball and mockingly waved it at the bleachers before tossing it harmlessly back over the wall: a lonely souvenir in search of a recipient.

Anyway, to make a long story somewhat less long, my other roommate made it after a round of frisbee golf in Golden Gate Park at around the 4th inning (the whole section applauded when I introduced him, with one guy asking him where his piano thingy was, which was funny because it was he who gave me this one!), and we watched a game that had it been a playoff, or any sort of contest involving any teams with "Boston" or "Yankees" in their name, would have aired immediately, following its conclusion, on ESPN Classic.  There were 5 lead changes and high drama abundant in all its forms, all punctuated by yours truly (and countless others) giving you-know-who a mountain of sh*t out there in left field to the amazement and (I'd like to think) delight of the (delirious for the whole, wild game) crowd up there in the bleachers.

Then, the 9th... as we got the winning run on, I started to go full bore at him.  The youngest boy (maybe 11) to my right elbowed me in the ribs twice, and whispered "Call him a bum again." with a mixture of awe, wonder and anticipation of deafness... and I did not disappoint.  As the moment of truth approached I bellowed, with the ragged edges of my spent vocal cords splattering all over the railing, WHOSE FAULT IS IT GONNA BE THIS TIME MILTON??!!??? no less than five times at an excruciating volume, and Bradley started to fidget and stretch his legs.  Behind me, the LET'S GO OAK-LAND chant morphed into the syllabically-identical KURT SU-ZUKI, and I let out one last tortured scream of BRAAAAAAAADDDLLLLEEEEEEEEYYYYYYY as Kurt swung his mighty stick and then all Heaven broke loose. 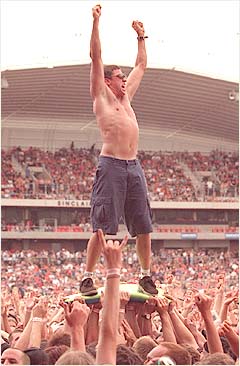 EN, amid an ecstatic crowd, reacts to the Athletics' walkoff win

As the winning run crossed the plate, the oldest of the kids to my right leaned across his friends and grabbed me, high-fiving me repeatedly and emphatically... then I turned to face the crowd and saw several people pointing at me and waving frantically, giving the proverbial thumbs-up and acknowledging that it was at least partially possible that the cumulative effect of what I had been engaged in had in some way affected the outcome, given that Bradley essentially had managed to grotesquely clam his route to the ball and, despite his flashes of brilliance earlier in the game when he had HR'd and made a nice sliding catch to save a bases-clearing double, lost the game for his team by doing so on what amounted to a catchable ball.  The next ten minutes were spent palm-slapping total strangers and carrying on like a horde of pillaging nutjobs all the way to BART. 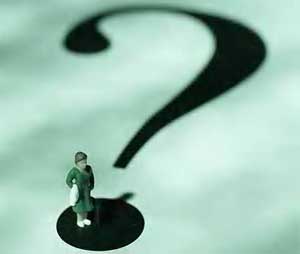 After the initial high wears off, EN considers the ethical questions.

So, what of it?  Did I do wrong?  Does the fact that Bradley played and excelled for our side (before burning it all down, like he does, to varying degrees of immolation, in every single city in which he plays) preclude us letting him have it in 2010, given that he plays for the team through which the division title may very well run and has demonstrated himself to be someone who will let the razzing of fans interfere with his (not unimpressive, at least between the lines) game at times?  Do I go back the next time the M's, a divisional foe against whom every win is worth two, are in and continue/resume the onslaught, just to see if I can make him crap one with the game on the line again?  Do I go immediately for the anger counseling that my roommate claims the terror with which I was yelling at MB warrants?  These are the questions that try men's souls, made all the more relevant by the fact that we are in Seattle, with the chance to really put some bad April thoughts in all the Mariners' heads, for a 3-game set starting this afternoon... I will have a game thread up as soon as lineups hit the widget, which should be around 2:30 PM Pacific.

Please use the comments to discuss prospective Bradley heckling strategies (preferably involving exotic musical implements), the reasons you feel I am a disgusting and abusive lout with no business within 5 miles of young children or a baseball stadium, the improbably fast start of our (first place!) club, or just pie.