Oh hello, I didn't see you there. What's that? You want to learn more about Oakland Athletic rookie, Tyson Ross? Well, you've come to the right place, your friends from the California Golden Blogs, SBN's Cal site. When a Cal fan hears the name Tyson Ross, it harkens back to an earlier, simpler time: the late 2000s. It was a different time when a young Lady Gaga was teaching America to love again and most husbands had yet to experience the soul-crushing despair that is Twilight. Back then, Cal fans were in ground to tree combat with a bunch of hippies and names like "Dumpster Muffin," "Ayr," and "Kitten Strangling Murdidlierderer" were household curses amongst many. In this before, before time, there were legends of a man named Tyson Ross. Standing 40 feet tall with biceps the size of Arizona, people spoke of this Tyson Ross in the same unbelieving whisper of a unicorn or a healthy Justin Duscherererererer.

While Cal teams have had trouble making the College World Series, they have not lacked for talent. Whether it was Xavier Nady or Conor Jackson earlier this decade or Brandon Morrow or Tyson Ross much more recently, Cal has had a lot of players make it to the next level. For college baseball teams, which tend to play on Tuesday, Friday, Saturday, and Sunday, the Ace is key. They tend to pitch every Friday, hoping to start every series off right. Have an Ace and you just have to win one of the two weekend games to take the series. So, the importance of Tyson Ross cannot be overstated. I join you with CGB's resident Cal baseball expert, carp, to discuss the journey up and down the 80 corridor of Tyson Ross. He wrote about 95% of this, I just added a few touches. Please, join us after the jump to learn more about the A's exciting, young rookie.

carp: Oakland native Tyson Ross has been a fan of the A’s since Tony LaRussa manned the top step for your Oakland A’s. For those scoring at home, I believe that makes Ross an A’s fan since 1993 or so, which could otherwise be known as the Joe Slusarski/Ruben Sierra-Village Idiot era.

After this mental image has sunk and registers as one of the greatest experiences ever, let’s return to Ross, who as a teen literally played down the street from the A’s at the corner of 66th and East 14th

"It's so close, you could hear the A's crowd and the announcer's voice," said Ross' father, Dr. Willie Ross, a pediatrician. "He only wanted to play for one team his whole life. Can you believe that? Incredible."

While at Bishop O’Dowd, the 6’6" Ross was the most dominant pitcher that Coach Joel Kauffman had ever coached:

"Tyson was the best pitcher that I have ever coached and was the most humble team player to boot."

Ross would lead Kauffman’s Dragons to the 2005 Division III State Championship, before starting his collegiate career down the road at Cal. Ross was named the 2005 North Coast Section Player of the Year.

I believe Ross is in the front row at the far right.

Ross’ freshman season featured 85 K’s in 84.2 innings pitched en route to All-Pac 10 Honorable Mention and Freshman of the Year awards. In the summer of 2006, Ross played summer ball for the Anchorage Bucs:

Apparently, you can buy this card off of E-bay.

Ross had a fantastic sophomore campaign, which featured 120 K’s in 115 IP with a 2.49 ERA. Ross earned first team All-Pac 10 honors, as well as a Rawlings Gold Glove for his defensive prowess while on the bump. Perhaps his greatest game came on March 22, 2007, when he fanned 16 (16!) in a game against Oral Roberts:

BERKELEY, CALIF. - Despite a phenomenal pitching performance from sophomore right-hander Tyson Ross, in which he had a career-high 16 strikeouts and yielded just three hits in 7.0 innings, the Cal baseball team dropped a 2-1 decision to Oral Roberts Thursday at Evans Diamond. The Golden Bears lost their eighth one-run game of the year to fall to 12-13. The Golden Eagles improved to 11-9.

Here is his line from that day:

I’d love to never see another camo-uni ever again.

Here is a video from that sophmore year of Ross:

Despite a disappointing junior year where Ross was plagued by a strained lat muscle, he left Cal following his junior season with three flavors of fastball (cutter to throw away from righties, two-seamer to throw down and into righties, and a 4-seam by-you special), a circle change-up, a 11-5 breaking hook, and a filthy slider. A’s scouts frequently watched Ross, who was compared to Fergie Jenkins, including GM Billy Beane on more than one occasion. The A’s were thrilled that Ross fell to the 2nd round, where he was selected with the 58th overall pick and is believed to have received a signing bonus of nearly $700k.

He relied heavily on his slider in college, and notes that his ascent in the A’s organization is due to his ability to utilize his fastball that touches 97 mph:

"In college I was just flipping sliders in there a lot," he said. "But it's a long season and if you're going to succeed, you've got to throw fastballs."

The other night, Tyson Ross made his major league debut in the Coliseum, striking out 2 in 2.1 IP with the game on the line.:

Ross made his big-league debut by relieving Duchscherer with two outs in the sixth and striking out Rob Johnson to end the inning. It was 5-4, Mariners, at that point, but Suzuki doubled home Mark Ellis - who won Tuesday's game with a 10th-inning single - with the tying run in the seventh.

Ross retired seven of nine batters, including Ken Griffey Jr. on a strikeout. With two outs and a runner aboard in the eighth, Kouzmanoff robbed Franklin Gutierrez with a diving stop at third, and Daric Barton made a long stretch at first, ending the rally.

"Nothing more I can ask for right now," Ross said. "This is something I looked forward to my whole life. Now that it's here, I'm going to soak it all in."

Depending on who you talk to, Ross projects to be either a front-of-the-rotation starter or a reliever. The former, if you believe his odd delivery will continue to keep him injury free, the latter if you buy into poor mechanics=eventual major injury. Tyson Ross sounds like a nice, humble baseball player. For example, he is working on completing his college degree:

He plans to finish Cal by taking classes in the offseason. During his first season in the minors, he took a music course online and, after bus trips, would stay up an extra hour or two taking tests. He passed the course and applied the credits toward his Cal degree.

A former team-mate from high school noted this about Ross:

"Tyson has always been one of the nicest, most polite baseball players. When I played baseball at O’Dowd, there were so many good players that everyone wanted to do the little things to stand out to the coaches as real ballplayers. This meant assuming the ‘baseball player persona.’ That included chewing tobacco, being loud and obnoxious and sucking up to the coaches.

"Tyson never had to do any of that because he was better than everybody else. He didn’t have to try to stand out because he was a 6-5 phenom. For him baseball came naturally and he didn’t need the baseball persona. In fact, I always felt he made strides to stay normal despite being on the national team, despite being voted ‘most likely to be famous’ in the yearbook his senior year."

From that Press Democrat interview, here is what he thinks when he is on the mound:

The first thing that pops into most people's minds when they think of Tyson Ross is the motion. It's definitely............unique.

SBNation blog, Driveline Mechanics, had a whole post on it. Here is a key excerpt:

People are worried about his follow-through (which is weird - he is mainly upright). However, that's not the big problem - he has a major Inverted W in his delivery. It's something I haven't seen since Mark Prior. It's very bad.

And here's a still of the Inverted W: 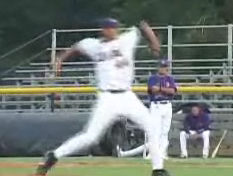 For comparison, here's Mark Prior:

Ugh. This will cause major shoulder problems due to impingement syndrome, and to top it off, it causes a major timing flaw at footstrike. Tyson's arm is hanging down at footstrike and is very late - he will stress his Ulnar Collateral Ligament extremely hard as he experiences violent external rotation due to forearm bounce.

You'll notice not a huge leg kick and a very stiff upper body. Here is a photo I took at a game in 2007: 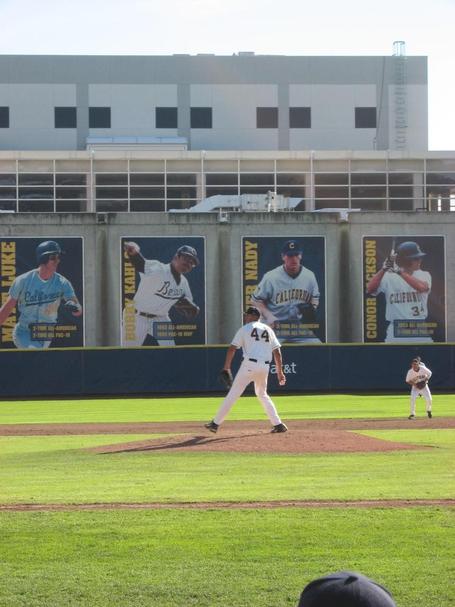 You can see the upright nature of his motion there. Here is video of him pitching in his major league debut on Wednesday, April 7, 2010. It appears that they've extended his leg kick more and lengthened his stride. This seems to make the motion more compact and tighter as compared to the lankier motion we saw in college. I am not sufficiently knowledgeable about the motion and its relationship to injuries, so I cannot speak as to whether it is less likely to cause injury. He still retains much of the shoulder flinging action that we saw in college, so it is not a total change. Hopefully, the changes will help him avoid injury as expressed by the gentlemen at Driveline Mechanics.

However he turns out, we’ll all be rooting for the East Bay Express, who got his first major league save today! Many thanks to Nico and gigglingone for their help with this post. We look forward to seeing you over at CGB. GO As AND GO BEARS!