As Offense Explodes as Gio Gonzalez Shuts Down the Angels

Share All sharing options for: As Offense Explodes as Gio Gonzalez Shuts Down the Angels 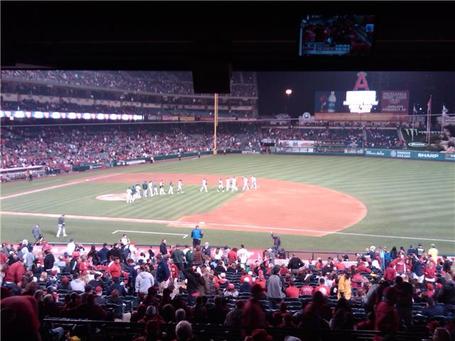 Hi Susan Slusser! Sorry we missed you, but we hope to see you soon!

Some late-night thoughts from the game:

First of all, who is this team in green and gold?! The A's offense showed no mercy to the Angels' pitching staff tonight, spraying 13 hits all over the ballpark en route to ten runs and the easy win. It may be game #5, but I am 100% into this team, something that I'm not quite sure I ever felt for the 2009 A's.

Before the game was even ten minutes old, the A's had put three early runs on the board, thanks to their winning 1, 2 combo of Rajai Davis and Daric Barton; both had three hits tonight. Rajai was robbed of his fourth, and Daric had an additional walk. It doesn't get much better than that for the top of the lineup.

We saw Eric Chavez finally, finally take the ball to right field; first a simple RBI groundout, and later a laser double. We also saw Pennington muscle out a homerun in the cold(ish) night air, as he continues to look fantastic.

But best of all, and perhaps something that can change the tide of everything that has ever gone wrong for the A's in the past three seasons, is that Daric Barton finished the game.

I didn't realize how much I LOVE Daric Barton and how much the A's desperately need him until the fifth inning. Barton, trying to pick off a runner at second, twisted his knee on the play and fell, in obvious pain. Immediately, because certainly the A's never get lucky with injuries, I thought of the worst case scenario; torn ACL, out for the year. But Barton not only rebounded, but played the rest of the game. That never happens to the A's. Yet this time it did.

Hidden in the offensive onslaught was our fifth-starter, Gio Gonzalez, who couldn't have scripted a better 2010 debut. He held the Angels to a solo homerun and an RBI single over six strong innings, easily earning the A's second consecutive starting pitcher win.

Gio had his usual trouble inning; he put two on in the fifth and allowed a single to score the second Angels' run. However, he put it all back together, and in short order. He regained his composure and struck out Abreu to end the inning, keeping the score at 5-2. He looked GOOD out there. And here's why: Despite the awesome line for Gio, his best stat by a country mile was his one walk. Match that up with his six K's, and he suddenly becomes a force to be reckoned with in the 5th starter spot.

Our starting pitching pretty much rocked their first go-around, and the bullpen is still phenomenal, even if a couple late inning runs by Edwar tonight spoiled the bullpen's 0.00 ERA. (Correction: I tend to ignore A's ninth innings; they're ugly. Blevins already gave up a couple of runs the day before.)

I'm still less than impressed with Ryan Sweeney, despite his single up the middle. His bases-loaded at-bat was terrible, and can someone explain to me how is it that he has so little power? For the record, Kouz left 5 men on base, Sweeney left 4.

The only other complaint I really have about the game was this: If you're going to play Suzuki every day (and the A's are), why not let Fox catch a couple innings up 10-2 or even 10-4? Suzuki got peppered with balls from Breslow in the ninth, and if he isn't going to get days off, how about at least a couple of innings?

But I digress. This is a happy thread. Tonight was a satisfying, solid, feel-good kind of win, and I'd like the first-place A's to keep doing whatever it is they are doing.