Yesterday, Justin Duchscherer made his first game appearance in over a year and a half. He was, by all accounts, successful, allowing four hits and no runs over four innings. Also, it appears MLB turned the PitchFX cameras on for the first time this year. Nice timing.

He's had a lot of time away from the game, so I wanted to take a look and make sure his pitches still acted the same as they did before he left. In the interest of simplicity, I just compared today's outing to one game from 2008. His appearance on July 8th fits the bill--he was in midseason form and showed it by spinning a complete game shutout in Seattle. The movement charts from both games are after the jump. 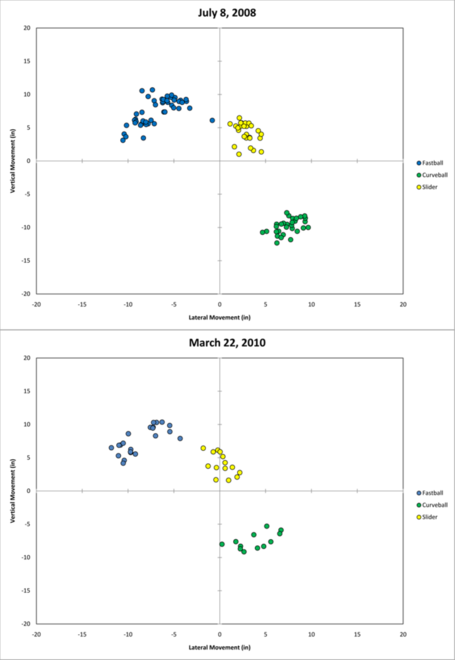 First things first. On both days, Duchscherer used four different pitches: a four-seam fastball, a two-seam fastball, a curveball, and a sort of cutter/slider. I don't actually know what grip he uses on the cutter/slider, but its movement and velocity lie somewhere in the overlap between the two pitches. I called it a slider on these graphs.

Of course, it's not really fair to compare a midseason appearance with the first outing of spring. Yesterday, Justin's pitches didn't seem to have as much bite as they should have had, but that's perfectly acceptable this early in Spring Training, as he hasn't had the chance to build up his arm strength. In any case, it didn't seem to faze Justin at all, considering his final pitching line. To be sure it was only an arm strength issue, I generated a new kind of velocity chart to compare the two starts. 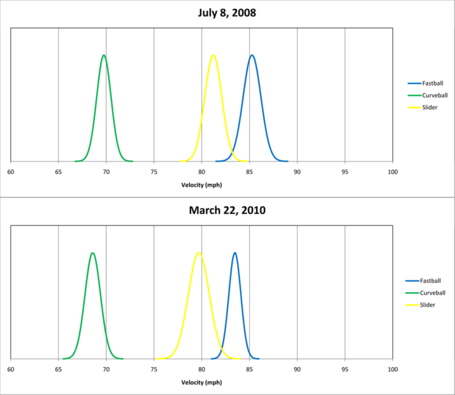 This chart shows the average velocity of each of Justin's pitches like a bell curve. The height is meaningless, but the width of each curve shows how consistent he was with the velocity. A narrow curve indicates that his pitches were consistent and similar. A wide curve means that his pitches were all over the map, speed-wise. It looks like Duchscherer was missing two or three mph from all of his pitches evenly, without a significant loss in consistency. Should be nothing to worry about, as he'll gain that arm strength back with more innings of work.

The A's have the day off today, but tomorrow night they'll face the Dodgers at home at 7:35 PM. And according to the official schedule, it'll be broadcast on CSN California.