Share All sharing options for: Fun With Pull Charts

Have Spring Training games started yet? No? Since there's nothing new to talk about (unless signing Tomko and Jennings is "news"), all we have left is reorganizing and regurgitating old baseball. With that in mind, I generated pull charts for our 2010 lineup, based on 2009 data. Each chart is divided into three field sections, simply showing the player's wOBA on batted balls to that area of the field. Pure white is set at the average wOBA for 2009, with shades of red and blue corresponding to above and below the average, respectively. Chart after the jump. 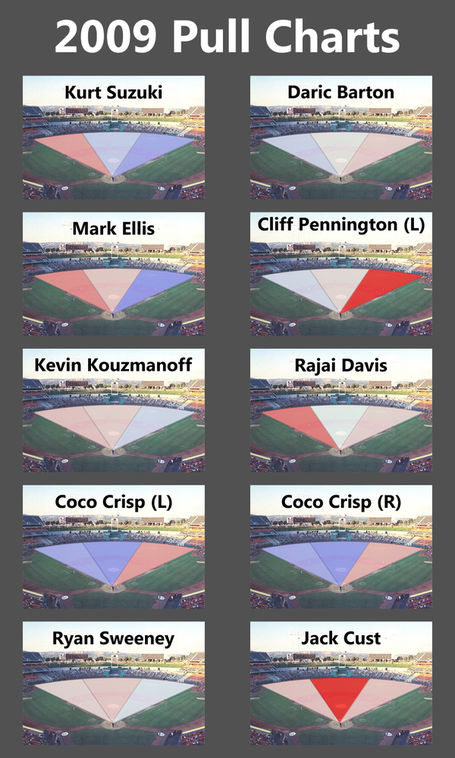 The whole point of these charts is to show how much each batter pulls to his side. Take, for example, Mark Ellis. His pull split is relatively strong, meaning most of his batted balls are hit to his side of the batter's box. Ryan Sweeney, on the other hand, tends to spray balls all over the field in a balanced fashion.

Of course, the main advantage of hitting balls to all fields is that the defense can't "cheat" and reposition themselves. Recall that Jason Giambi, who exhibited a very pronounced pull effect, would always find the defense shifted over onto the right side of the field, which clearly put him at a large disadvantage.