Who Really Has the Best Rotation in the AL West?

Share All sharing options for: Who Really Has the Best Rotation in the AL West?

Yesterday, Sports Illustrated writer Jon Heyman published an article about the "best units" in baseball. You know, best lineup, best infield, that sort of thing. The first subject he tackled? Best rotation. His choice? The Angels.

Despite the loss of John Lackey to Boston, the Angels still possess the deepest, most balanced rotation in baseball.

Yes, the Angels. While he does admit that "Red Sox, Yankees and White Sox rotations probably have stronger cases to be cited as the best overall starting staffs based on their top-heavy strengths", he crowns Los Angeles's rotation as the "deepest, most balanced rotation in baseball". He continues:

But it's hard to make a case any team has a rotation as solid as the Angels from top to bottom.

Remember, the Angels rotation is going to look something like this: Jered Weaver, Ervin Santana, Joe Saunders, Scott Kazmir, Joel Piñiero. Heyman is right about one thing--it's balanced. But is a balanced rotation really all that useful of an asset? Is a rotation of five mediocre pitchers better than an ace or two, followed by scrubs? Can a rotation led by Jered Weaver really be considered good?

And here is each rotation member with their CHONE projected park-adjusted FIP. The rotation's average FIP is on the right column. 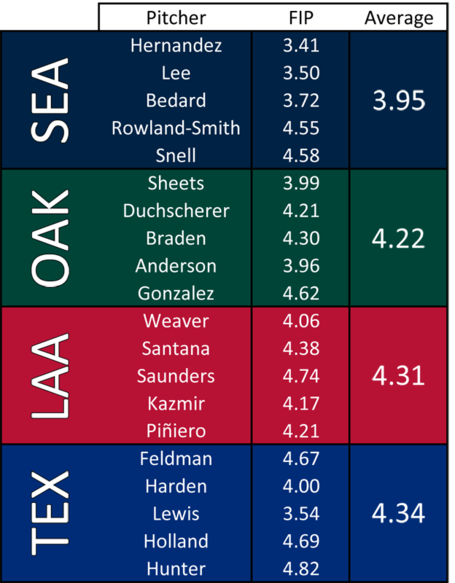 It's clear. Seattle has the division's best rotation, and it's not close. They may very well have the best rotation in all of baseball. Addtionally, those averages give all five rotation members equal weight. Seattle's best three pitchers are all projected to have lower FIPs than 14 out of 15 of the non-Seattle starting pitchers in the division. When you account for the fact that front-of-the-rotation pitchers will likely pitch thirty or forty more innings than fourth or fifth starters, Seattle's advantage in the division grows even more.