For those that don't know, San Diego's Petco Park is huge. Cavernous. Gigantic. Because of the deep, deep fences, it's necessary to perform park adjustments when analyzing a traded player, especially when dealing with such an extreme case like Petco. Thankfully, most projection systems do this automatically, and the results are included in the projection. Projection systems usually perform park adjustments by way of a statistic called Park Factor. This statistic gives a value that rates how far away from the average a park is at run scoring. (ESPN's calculations from 2009 are linked here, and yes, Petco Park has ranked 30th out of 30 for three years running.) Then, batting lines are adjusted proportionally across the board. This approach is fine for most uses, but the proportional approach allows room for special exceptions that buck the rule. Johnny Damon at the short right porch in Yankee Stadium comes to mind. To cover these exceptions, you'd have to directly compare batted balls to the shape and size of a particular park.

Thanks to Sean Kelly, I've found an undeniably cool tool to compare batted balls from one park to another. To give an example of what this tool is capable of (and to illustrate the sheer size of Petco Park), here are all of the batted balls hit at Oakland in 2009, overlaid on top of Petco. All of the red/orange dots were turned into outs. The blue dots were hit safely, where a darker shade represents more bases (home runs are the darkest blue ones). Take a look at how many Oakland home runs would have been outs in San Diego. 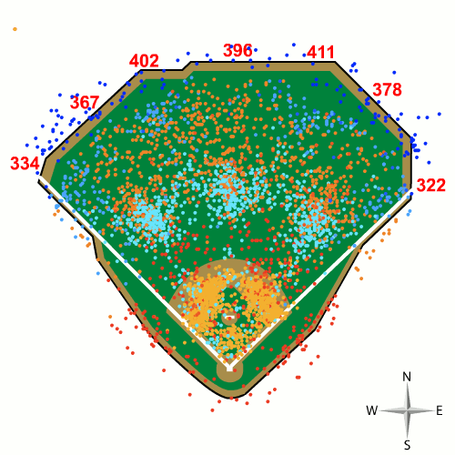 Obviously, a park like that is going to impact a player's numbers by a ton. How much did Petco Park affect Kevin Kouzmanoff's numbers? Last year, with half of his games at Petco, he hit .255/.302/.420, with 18 HRs. Below, I've circled (in black) the non-HRs that would have left the park in Oakland. 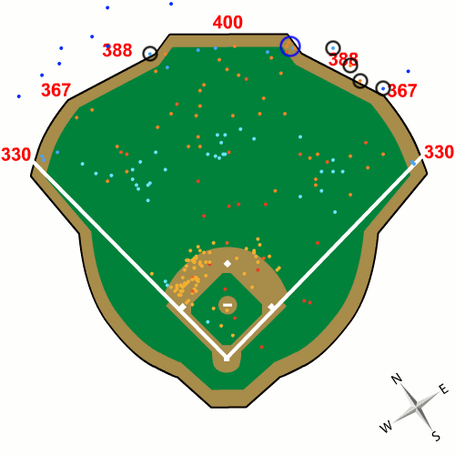 Five. Five balls that landed inside Petco would have left the park in Oakland. With those black circled balls (two doubles, one triple, and two fly outs) turned into home runs, Kouzmanoff's line stands at a nicer .259/.305/.444. That's a 28 point increase in OPS, all from moving to a slightly less pitcher-friendly park.

A warning: This is far from an exact science, as there are far too many variables unaccounted for in this simple overlay. Atmospheric effects, like the heavy Oakland marine layer or the jet stream in Yankee Stadium (not to mention the thin air in Denver), aren't taken into consideration. Wall height isn't accounted for, which throws off results from Fenway, for example. And these ball positions are taken from MLB Gameday, which means that the dots represent where balls were fielded, rather than where they landed. The difference shouldn't be much, except for doubles and triples that were allowed to roll around a bit.

Stick around when the A's take on the Chicago White Sox at 12:05 today. Game thread to follow.