A PitchFX Look at Ben Sheets

Share All sharing options for: A PitchFX Look at Ben Sheets

If there's one key move that Billy Beane has made this offseason (out of what seems like a million) it's the acquisition of Ben Sheets. Beane went out and nabbed the biggest wildcard on the market. If that doesn't sound like classic Billy Beane, it's because, well, it's not. But Beane's never been one to sink into a predictable rhythm. Signing Sheets gives the A's a true ace at the top of the rotation to go along with our possible near-ace production from Justin Duchscherer and Brett Anderson, so now's as good a time as any to crack open the PitchFX vault again to try to get a clearer picture of our new frontline ace.

Let's get the basic stuff out of the way. Sheets throws a 93-mph four-seam fastball with huge "rise", an 84-mph changeup, and his famous 80-mph 12-to-6 curveball. Taken on its own, his curveball doesn't really drop all that much (three to four inches--compare to Zito's ridiculous ten-inch curve). More importantly, though, Sheets has a well above average 14-inch difference between his fastball and his curveball due to his fastball's abnormally large "rise". That fastball/curveball difference appears larger to hitters because Sheets's curveball comes in at an almost slider-like high speed. Throw in Sheets's impeccable command, and you have a pitcher who earns every bit of his career 7.60 K/9.

But Sheets's trickery doesn't end there. I picked a game to crunch PitchFX numbers for (his one-run complete game against the Braves on June 23, 2008), and this jumped out at me: 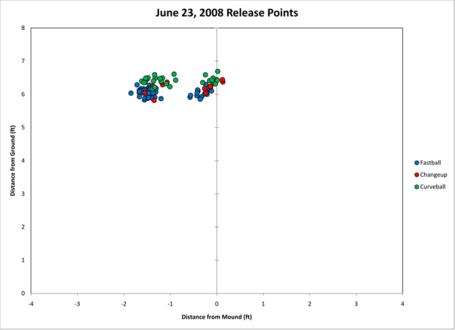 Ben Sheets uses two distinct arm slots. To make sure it wasn't a one game error, I used Fangraphs's PitchFX game charts to confirm it. All throughout 2008, Sheets used two separate release points--an extreme overhand delivery mixed in with a more conventional three-quarters arm slot. And the kicker? His pitches were identical in both release points. That's incredible. Sheets is able to throw the same fastball and the same curveball from two release points, without any change in velocity or motion. 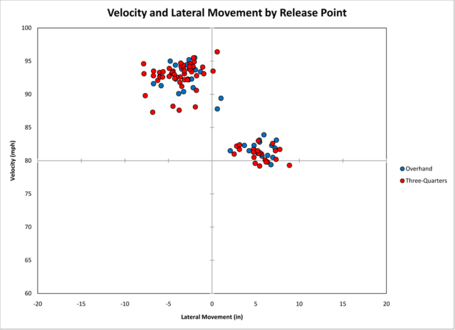 Compare this to the James Simmons AFL PitchFX report I did, where I caught Simmons toying with a new arm slot. When James Simmons moved to a lower release point, he lost 5-10 mph on all of his pitches, with an increase in lateral movement. Granted, Simmons's release point change was more drastic than Sheets's, but I don't see any velocity penalty at all.

In short, Ben Sheets is what happens when you mix a deceiving control artist with solidly above average stuff (unfortunately married to a body that seems to constantly be at an injury risk). Let's ride him while we can, folks, because in terms of pitching talent, Ben Sheets looks like the best pitcher we've had since Rich Harden.

Update: All credit goes to ST for this idea. It turns out that the release point depends on the handedness of the batter. When facing right-handed hitters, he pitches with the overhand delivery. Lefties get the three-quarters arm slot. Anyone have any insights on why he chooses to do this?