The SIERA Club and the Race for the Fifth Starter Spot

Share All sharing options for: The SIERA Club and the Race for the Fifth Starter Spot

I've sort of made it my mission here to educate AN about advanced baseball statistics, focusing on their applications to the A's and how we can directly use these advanced statistics to improve our team. In that spirit, I jumped at the chance to write an article on Baseball Prospectus's brand new pitching statistic, SIERA (Skill-Interactive Earned Run Average). In this post, I'll explain how SIERA works, and touch on the little competition we have going for the fifth starting pitcher spot.

Let me start from the beginning. SIERA is an ERA predictor, much like FIP, xFIP, and tRA. It gives an immediately familiar ERA-scaled number that attempts to divorce luck from actual pitching skills. To put it in simpler terms, ERA predictors try to give an ERA-like number that's more representative of how a pitcher actually pitched. SIERA is a member of the defense-independent family of statistics, meaning that like FIP (K, BB, HR) and tRA (K, BB, HR, GB, FB, LD), SIERA only uses events that are directly under the pitcher's control, instead of actual results like singles or lineouts. Specifically, SIERA uses strikeouts, walks, ground balls, fly balls, and pop ups. That's it.

SIERA is actually an improvement and correction over Baseball Prospectus's QERA, but since I haven't seen QERA talked about here, I'll cover some of the things that QERA introduced as well. The main reason behind creating SIERA (and QERA) is that Baseball Prospectus realized that while you can assign a run value to each event, the run values aren't linear. In other words, even in a context-independent point of view, not every strikeout or walk is the same as every other. I'll talk about each point separately.

It turns out that if a pitcher has a high strikeout rate, each additional strikeout is worth a little bit less. Or, inversely, for a pitcher that very rarely strikes anybody out, a strikeout is worth a ton. Baseball Prospectus hypothesizes that this is because a low-strikeout pitcher will tend to have a lot of baserunners, so each strikeout has a greater chance of stranding a runner.

For many of the same reasons as above, the more ground balls a pitcher creates, the more each one is worth. Baseball Prospectus reasoned that because a high-ground ball pitcher will likely allow a fair amount of ground ball singles, every additional ground ball has a higher chance of creating a double play.

Fly Balls Are Less Dangerous With a High-Strikeout Pitcher

A high fly ball rate means a lot of home runs (also why Brad Ziegler almost never allows a homer). If a pitcher is able to get a high number of strikeouts (i.e., less baserunners), each home run will do less damage. Baseball Prospectus uses the example of Johan Santana, whose high strikeout rate means that he tends to consistently outperform his FIP, as his home runs consistently score less baserunners than the average pitcher.

Ground Balls Are Less Dangerous With a Wild Pitcher

Again, for much of the same reasons, if a pitcher tends to allow a lot of baserunners with walks, each ground ball has a higher chance of creating a double play.

So what does it all mean? SIERA tends to be similar to FIP and tRA for the most part, but for a few outliers, it performs noticeably better in predicting next year's ERA. We can use SIERA to gain a more accurate picture of a pitcher's true skills, without much of the influence of luck.

So with all of this in mind, the following table contains the SIERA of all of our pitchers (with at least 30 IP) from last season, and for comparison, FIP, xFIP, and tERA (tERA is just tRA scaled down to match all of the other metrics here). 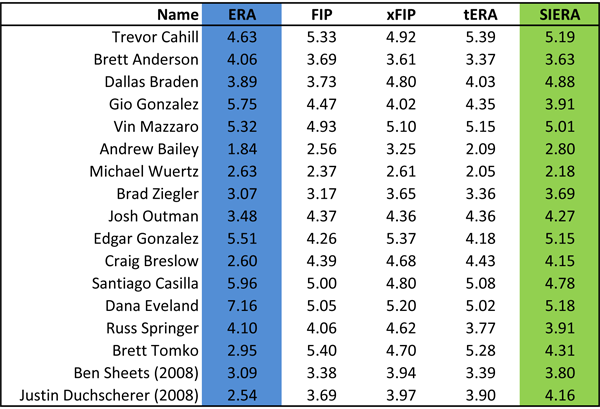 Because SIERA considers home runs to be an unavoidable byproduct of fly balls, SIERA tends to line up pretty well with xFIP. But SIERA actually likes a lot of our relievers better than xFIP does, which likely has to do with their high strikeout rates. In particular, Craig Breslow seems to benefit most from SIERA. His high strikeout rate coupled with his heavy fly ball tendencies plays directly into SIERA's forte.

But I wanted to focus attention (and hopefully foster a nice debate) on the fifth starting pitcher spot. I think you all know where I stand. Even without looking at SIERA, Gio Gonzalez soundly beat both Trevor Cahill and Vin Mazzaro in FIP, xFIP, and tRA. SIERA loves Gonzalez even more, as a result of his high strikeout rate. It's clear that Gio's 5.75 ERA was fueled mostly by luck. His actual pitching talent should carry him into a great 2010. Who do you guys think should be the frontrunner going into Spring Training?