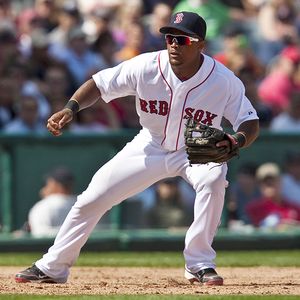 mlbtraderumors.com is reporting that Boston and San Diego are close to making a trade revolving around Adrian Gonzalez. Additionally, it is being reported that Kevin Youkilis would then be moved to 3rd; essentially ending Adrian Beltre's career in Boston. It has not yet been reported what Boston would give up for Gonzalez, but i would assume that either/both of Casey Kelly/Anthony Rizzo would be involved.

Links that are reporting that the deal is close

So what does this mean for our A's?Well, as we all know Oakland has "apparently" offered Beltre a five year contract. It is being reported that Beltre would have preferred to stay with Boston, however, with them possibly out of the loop the A's would have to become the favorite to land Beltre. Apparently the length of the contract is as important to Beltre as the annual amount, so the A's five year contract would seem to appease his wishes. I would conclude that shortly after the Gonzalez to Boston trade is announced that Beltre would then flip and immediately sign with the A's.

Where do we go from here? If, and i stress IF the A's are able to sign Beltre it would represent a huge coup for this franchise. So experts have touted Beltre as the 3rd best free agent this Winter, that would be a major acquisition for the A's. However, my no means does this signal an end to the A's off-season. The A's still need to upgrade what was a horrible offense in 2010.

Players the A's have been linked to

I wonder if signing Beltre and Berkman, trading for DeJesus and possibly signing Iwakuma would satisfy A's fans this off-season? I personally think adding these four players would make the A's instant contenders in the AL West, this of course if Beltre lives up to expectations and Berkman can bounce back from a down 2010 season. These are big ifs at this point.