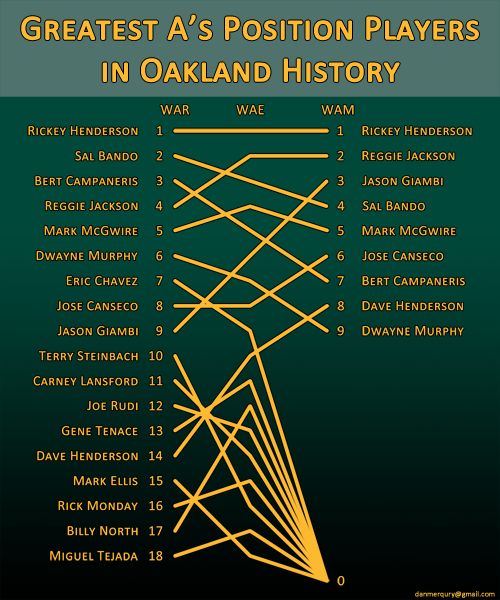 If you wanted to make a list of the greatest baseball players in history, WAR would be a great starting point. It's unbiased, context-free, and easy. And yet, it's lacking something as far as Hall of Fame selections go—people prefer short brilliance to long competence, and with good reason. Jamie Moyer currently stands only seven career WAR below Sandy Koufax, and yet you'd get strange looks if you argued that Moyer should be a first-ballot Hall of Famer. Or possibly an any-ballot Hall of Famer, really.

Enter: WAE, or Wins Above Excellence, a simple modification of WAR. Sean Smith (of CHONE projection fame) came up with the idea about a year ago. All the stat does is move the baseline for WAR up from replacement level (0 WAR) to a level of "excellence" (3 WAR). WAE can never be negative, so it never penalizes anybody below the threshold. Instead, it just gives credit to only those who were able to play at a high level.

Adam Darowski (from Beyond the Box Score) took WAE one step further, by raising the baseline to 6 WAR. He called this WAM, for Wins Above MVP Level. Only the most elite of players can ever accumulate WAM, which helps to differentiate those players from their longer-lasting quieter brethren. And just two days ago, he revisited the stat and created another variant that he called wWAR (Weighted WAR), that simply adds up WAR, WAE, and WAM. In effect, any production above 3 WAR is counted twice, and any production above 6 WAR is counted three times.

The graph at the top of this post tracks the changes in WAR, WAE, and WAM among all Oakland batters since 1968. A few months back, I ran through the list of players by WAR, but this chart adds in WAE and WAM, to get bit of a different perspective.

Methodology Note: Like last time, I only counted players who played for the A's in Oakland, not Kansas City or Philadelphia, although I did count the KC years for players who moved with the team to Oakland, like Sal Bando. This time around, I used Fangraphs WAR instead of Rally WAR, so the WAR leaderboard may look a bit different, numerically. Unfortunately, because of the switch, I had to restrict this only to batters, because Fangraphs WAR only goes back to 1980 for pitchers. Just for kicks, Tim Hudson is far and away the winner among the Big Three in all three categories—WAR, WAE, and WAM. In fact, he's the only guy with any WAM at all, with a 6.3 WAR season in 2003.