Sunday, Random Sunday: The Legion of Doom, or Something...

Share All sharing options for: Sunday, Random Sunday: The Legion of Doom, or Something...

Update: Zack Greinke is a Brewer. I vahklempt. Discuss amongst yourselves...

Godzilla Schmodzilla. But let me explain.

My personal favorite was Ultraman. I wish the A's potentially brilliant, yet proven fragile, outfield could have that little microphone thing that Hayata would use to activate Ultraman. That would be sweet.

No more Coco Crisp climbing the wall in pursuit of some rocket shot to Center. He'd just hit the red button on the side of his beta capsule and strike some Kung Fu poses as he grew to 130 feet tall. He wouldn't even have to catch a ball for this to be cool. Of course, he would fall into a coma while Ultraman battled the evil beast of record, but would we really mind Coco sleeping in Centerfield while Ultraman dispatched of the Yankees?

This whole Coco as Ultraman/Hideki as Godzilla dynamic has me thinking the A's of the next season might be akin to the Legion of Doom. Or, perhaps some hybrid of the Justice League, the Legion of Doom and a bunch of other pop culture phenomena. Just think what that means for the stadium debate... Now it's not only where to build, but should it look like the Hall of Justice as depicted in Super Friends? The Legion of Doom? The Batcave? Whatever Godzilla's under sea home looks like?

But for this to be true we must also consider a few other alter ego scenarios, besides Coco as Ultraman, don't we?

The first, and maybe my favorite, alter ego is that of David "The Jesus" DeJesus. Beyond the specter of 8 year olds... Let's imagine our new Left, or is it Right, Fielder wielding a bowling ball with wicked precision. Obviously, the purple jumpsuit won't stand. I envision a nice green and gold tie dyed jumpsuit in it's place. Either way, the dude can roll on Shabbas.

I think of David DeJesus and I have visions of the past 4 seasons... Swingles and DFA and A Boy Named Shannon and Matts and Cojack. I can only think of 5 words to sum up what DeJesus means through this prism of futility... This injustice won't stand, man.

Next, we move towards a superhero: MC Hammer. Some would argue that MC Hammer isn't a superhero. I would only ask, "What exactly is the definition of a superhero?" It isn't often that a former A's bat boy becomes a world wide celebrity. In fact, I think it is a once in forever occurrence on par with a Kryptonian baby arriving on Earth and getting a funky high off the yellow sun. It is the stuff of movies and comic books and thus... I call superhero.

I think Steve Vucinich should consider some special pants (here is the pattern should he choose to sew them himself) for one Josh Willingham. Just sayin! It is part of the superhero uniform for one Hammer and they would go nicely with white spikes.

So, I ask you to imagine Ultraman (Only he won't be red and silver. He will be green and gold, of course) in Center, Jesus Quintana in Right, and Hammer in Left. Add to that the fact that Kurt Suzuki is the Hawaiian Punch, Kevin Kouzmanoff might look good in a Punisher T-Shirt (assuming Adrian Beltre doesn't swoop in wearing a Batman costume), Mark Ellis is already renowned for his magical powers, Cliff Pennington has an arm like a bazooka, Daric Barton (at least) looks like Captain America and Ken Korach, not Milquetoast Bob Geren, is my nominee for the role of Professor Charles Francis Xavier.

And none of this even accounts for the Teenage Mutant Ninja Turtles on the mound. Ron Romanick as Splinter. Andrew Bailey, Rich Harden, and Craig Breslow as Dusty Bottoms, Lucky Day and Ned Nederlander.

This gives time for Chris Carter to work on his Thundercat skills (Lion-O? Panthro? Tygra? It doesn't matter as long as he swings the Eye of Thunderra with brute force) as a Rivercat.

Who would stand in the way of the combined forces of Godzilla, Ultraman, The Jesus, MC Hammer, Captain America, Bazooka, the Punisher (Or Batman. I can hold out hope), A friggin' Unicorn, the Three Amigos and the Teenage Mutant Ninja Turtles?!?!?!?! With all of their action described over the airwaves by the golden throated Professor X? With a Thundercat waiting in the wings? No one. That is who.

It's like the Justice League without stupid undersea detours just so Aquaman has something to do.

I see your WAR/ZIPs/PECOTA projections and scouting reports and raise my crazy amalgamation of super heroes, movie characters, radioactive lizards and various other pop culture icons. The A's are in this thing.... Spring Training can't get here fast enough. 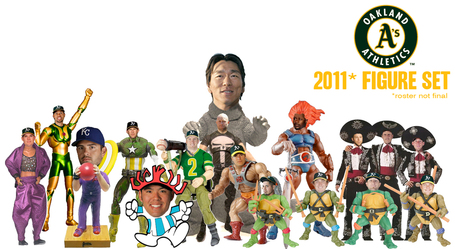