The Case of the Missing Bullpen

Share All sharing options for: The Case of the Missing Bullpen

Update: Hideki Matsui is now officially an Athletic. Contract is one year, $4.25MM. 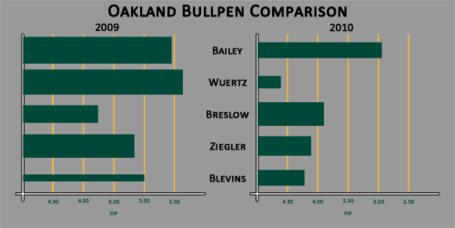 The length of each bar corresponds to FIP. The width is innings pitched. So the area of each rectangle? Total WAR, or total production. Click for a bigger version.

From 2000 to 2009, Oakland consistently had one of the best bullpens in the majors, usually constructed for pennies on the dollar. They averaged 4.9 WAR per season, with a sub-4 FIP. 2009, in particular, was a banner year for the squad, as they put up a phenomenal league-leading 8.6 WAR (a full 2.5 wins above the second place 'pen) to go with a collective 3.35 FIP.

Let me start at the top.

Bailey was one of the two bullpen pieces to have even a tiny slice of consistency from 2009 to 2010. Unfortunately, "a tiny slice" is about it. While Bailey still held a sub-3 FIP in 2010, his K/9 dropped through the floor, from a 9.83 to a 7.71. That's pretty worrying. Additionally, he missed more than a month in 2010 with an intercostal strain. Thankfully, Bailey is still one of the best relievers in the game, and as long as his strikeout rate doesn't continue dropping, he should be just fine.

How does a pitcher go from being one of the top five relievers in the majors to being below replacement level in the span of one year? Injuries, of course. In 2010, Wuertz opened the season with pitching shoulder tendinitis. He didn't throw his first pitch until May, and his control seemed to be off all season. His peripherals suffered more than any other Oakland relief pitcher, as he lost 2.5 K/9, while adding 2 BB/9 in the process. Will he recover with a normal Spring Training in 2011? Who knows? Wuertz's future is a very important factor that has been sorely overlooked.

Breslow is the only other bullpen member who was relatively consistent from 2009 to 2010. He added a bit more strikeout punch, walked a few more, and the end result was that his FIP increased by 0.2. Not inconsequential, but nothing really all that major, either. He's a fine third or fourth option, but ideally, he shouldn't be used as the bullpen workhorse that he was in 2010.

Ziegler really should have improved this year. Manager Bob Geren used him more effectively, by increasing his diet of right-handed batters. In 2009, the submariner faced 1.5 righties for every lefty faced. In 2010, that ratio increased to 2.3. And yet...Ziegler didn't strike out as many, he walked a few more, he allowed more home runs, and he induced fewer groundballs, in what was easily his worst season as a major leaguer. If he can regain his previous form, he can be a fantastic complementary bullpen piece, but if he continues on his 2010 path, he could be looking at a non-tender sometime in the near future.

Blevins was one of the biggest under-the-radar surprises of 2009. In an admittedly small workload, he racked up the strikeouts, flashed very good control, and kept the HRs down. In 2010, however, his HR rate spiked through the roof. This wasn't entirely unexpected. He's a heavy flyball pitcher, and multiple studies have shown that a pitcher's HR/FB ratio is almost entirely out of his control. Jerry can be a decent reliever with a small role, but he probably won't be much more than that.

So what can we expect for 2011? I have no idea. If Wuertz can come back from his injury, Henry Rodriguez finally fulfills his limitless potential, and Joey Devine manages to actually get healthy, the bullpen can once again be a strength. But if Wuertz's injury lingers, Bailey continues his worrying trends, and Ziegler stops generating groundballs, well, we could be in trouble. The difference between the 2009 and 2010 bullpens was somewhere between five and seven wins, depending on if you prefer WPA or WAR. That's a large enough margin to have huge playoff implications for 2011.