In what is the first big surprise in an offseason that will hopefully contain many, the A's sent in the highest bid to the Tohoku Rakuten Golden Eagles, and will have exclusive negotiation rights to the Japanese pitcher Hisashi Iwakuma. It's not often that the financially-strapped Athletics manage to sign someone with relatively high demand, so this is pretty big news.

Iwakuma, thankfully, is a groundball pitcher with good control that should thrive in front of Oakland's fantastic infield defense. Detailed stats can be difficult to find for his time in Japan, but he threw twenty innings in 2009's World Baseball Classic. And aside from his first WBC start (which was in the Tokyo Dome), his other three WBC appearances were in San Diego and Los Angeles, where he was recorded by the PitchFX cameras.

First things first—scouting reports indicate that Iwakuma throws a four-seam fastball, a shuuto, a splitter, a slider, and a curveball. His fastball is usually thrown in the low 90s although he can dial it up to 93, whereas his shuuto and splitter sit in the high 80s. (The shuuto is a Japanese pitch that is most closely related to a two-seam fastball or a sinker.)

Iwakuma's PitchFX movement chart from the WBC is below. Click for a bigger version. 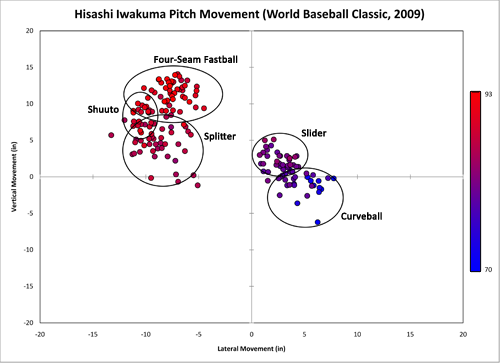 His splitter gets a lot of attention, and deservedly so. In fact, the break on the pitch resembles a sinker more than your typical splitter—it gets a fantastic amount of lateral tailing movement, which is rather unusual for most splitters. Dan Haren's splitter has about half the lateral movement that Iwakuma's does, with the same amount of sink.

Iwakuma's splitter may be his out pitch, but I like his four-seam fastball just as much. It couples the lateral tailing action of a good two-seam with the rising explosiveness of a great four-seam. In fact, Iwakuma is able to generate a few more inches of rise than Craig Breslow, who is always making batters swing under his fastball. And since Iwakuma has very good control (a BB/9 of 2.0 in Japan over his last three years), he should be able to harness the huge amount of break quite well.

The two off-speed pitches that Iwakuma throws, a slider and a curveball, however, just seem mediocre. The slider is pretty average as far as movement goes, and his curveball is doesn't drop much at all. Hopefully they'll be used more as a change of pace.

His shuuto might be the exotic new pitch, but it seems to blend in with his fastball and his splitter. As you can see, there's no real boundary that delineates the shuuto from his other high-speed offerings. Perhaps we'll know more after he pitches in the US for a while.

Iwakuma was an ace in Japan. Obviously, I'd expect his numbers to inflate due to the stronger competition in the US, but his two great pitches in his four-seam fastball and splitter seem to suggest that he'll be a fine pitcher in Oakland, where he can lean on the great Oakland defense.