Share All sharing options for: Vertical Spray Chart for Pitchers

As a pitcher counterpart for the batter chart I posted last week, here is a vertical spray chart for every Oakland pitcher in 2010 that had at least 30 IP. The angle of each line indicates the ratio of groundballs to flyballs that each pitcher was able to induce from the batters he faced, where 100% groundballs would be a horizontal line and 100% flyballs would be fully vertical.

This time around, the magnitude of each line corresponds to batter contact percentage. Instead of simply using the "Contact%" stat from Fangraphs (which gives the amount of swings that result in contact), I multiplied "Contact%" by "Swing%" to give the total amount of pitches that resulted in batter contact, whether the batter swung or not. And from some great feedback from last week, I added three curves at different contact radii, to give a better sense of scale. 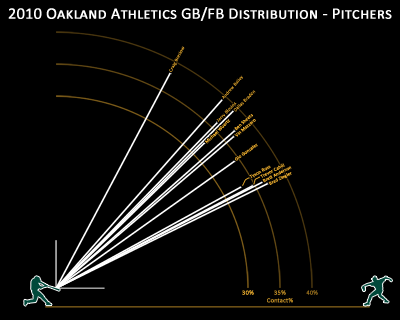