Assuming the expensive bats are off the table for Oakland in this upcoming free agency period, an alternate strategy would be to sign a pitcher, and then trade for some offense. I'm going to take a look at some of the possible free agent pitchers that should be worth a discussion in the A's front office over the next few months. First up, LHP Jorge de la Rosa, of the Colorado Rockies.

Signed out of Mexico as a 16-year-old free agent by the Diamondbacks in 1998, de la Rosa was finally able to produce in his fifth organization, ten years later. In his three-year stint in Colorado, he put together a 4.49 ERA with very high strikeout rates (8.9 K/9) and mediocre control (4.1 BB/9). The strikeouts are one of the reasons I'm an advocate of his signing, but the other, bigger reason is his groundball rate. He made some pitching changes before the 2010 season, and the result was a big increase in groundballs induced. He finished the year at 52.3%, which would have ranked 13th in the majors had he qualified. And with that increase in groundballs, he managed to lower his flyball rate to Trevor Cahill-esque levels and set a career low in line drive percentage. When you consider how great Oakland's infield defense is at fielding groundballs, de la Rosa could be a huge payoff with the Athletics.

But how did he generate those results? Time once again to go to the PitchFX tool set. (Click for a bigger version.) 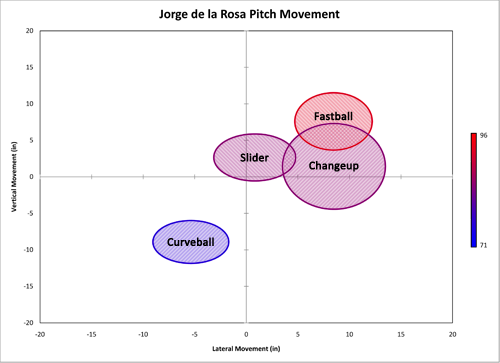 A quick refresher—this chart shows the movement (not the location) of Jorge de la Rosa's pitches from the catcher's point of view, relative to a spinless pitch. This time around, I compiled every pitch de la Rosa threw on the road (since the thin Colorado air causes pitches to break significantly less), and put them together. Each oval is centered on the average pitch of its type, and the semi-major and semi-minor axes of each ellipse have a radius of two standard deviations. To put that in English, each oval encompasses 95% of all of the pitches thrown of its type. Additionally, the color of each oval border corresponds to velocity.

What does it all mean? Well, his fastball has been rather mediocre, even though it tops out at 96 and averages at 93, which is well above average for left-handed pitchers. The problem is that it doesn't have a lot of positive vertical movement (think Craig Breslow, where batters constantly swing under his fastball) or very little positive vertical movement (think Trevor Cahill, where batters constantly hit the top of the ball and beat it into the ground). Instead, de la Rosa's fastball movement is just average. It's really quite poor, in spite of its high velocity and decent amount of lateral movement. Fangraphs' Pitch Type Linear Weights agrees, calling it eight runs below average over the season.

So how is de la Rosa able to get his success? His changeup. Let's put it this way—if Oakland signed de la Rosa this winter, his changeup would likely be the best changeup on the team, even beating Dallas Braden's. Dallas may have that obscene fastball/changeup speed differential, but Jorge's changeup has an unbelievable amount of sink on it, which almost gives it a screwball-like action. His changeup often breaks downward. Go ahead and try to mime a changeup grip from a three-quarters release point without giving the ball any backspin. I'll wait.

The sink on Jorge's changeup is what triggered the huge increase in groundballs for de la Rosa in 2010. Jorge threw the changeup 30% of the time this year, more than a three-fold increase from 2009.

In his final year of arbitration, de la Rosa and the Rockies agreed on a $5.6MM contract. Now that he's a free agent, he'll likely get $10MM annually. Oakland definitely has money to burn, since Eric Chavez and Ben Sheets are off the payroll (a savings of around $20MM). Jorge de la Rosa would make a fine option for a spot in the middle of the rotation.