Share All sharing options for: Fun with Hit Tracker Online and Home Runs

For some reason, it's one of the best-kept baseball secrets on the internet: Hit Tracker Online has been running and chugging through nightly baseball data for years now. In a nutshell, the site gathers video from every single home run hit in the major leagues and combines it with stadium blueprints and atmospheric conditions. The end result? A complete and accurate flight path for every home run, and more importantly, a "true" distance figure that shows how far a ball would have traveled if there were no poles, walls, seats, or catwalks in the way. It's an incredible resource. Why not have some fun with it?

The first, most obvious place to look: Who hit the longest home run for the A's in 2010? That would be Jack Cust, with a 452 foot blast off of Manny Delcarmen to right-center in Boston.  That baseball traveled over the bullpen and still had enough juice to land about fifty feet deep into the seats. You'd have to go back to Nick Swisher in 2007 to find a longer Oakland home run.

What about the longest home run allowed by an Athletic this year? Interestingly, there's a two-way tie, also with 452 feet—a shot by Alex Rodriguez in the Coliseum that hit a suite window behind the left field bleachers, and a bomb hit by John Buck (his third of the day!) that dented a second-deck Honda Accord ad. Both were hit off of Craig Breslow.

The cheapest home run hit by an Oakland Athletic? A 338 ft line drive by Rajai Davis that actually managed to sneak in the gap between the wall and the front edge of the Coliseum's BBQ Terrace.

But we can do more. I took all Oakland batters with at least three home runs and averaged their distances. And since Hit Tracker Online also calculates the ball speed off of the bat, I threw that in there too. Okay, okay, so I chose the three home run threshold just so I could include Chris Carter. Why not? 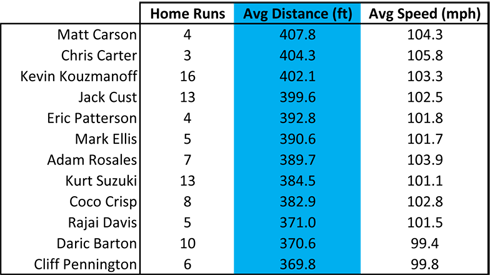 This is just a curiosity for the most part, but one thing that stood out to me was that Adam Rosales hits balls harder than you'd expect, given the final distance of his home runs. In fact, he has the hardest-struck home run by an Athletic this year, a 376 ft bullet off of Joe Saunders that left the bat at 111.3 miles per hour. I'm not sure on this, but this leads me to believe that Adam Rosales has a swing that doesn't generate that much loft. He can hit balls very hard, but his swing keeps them low and near to the ground. Not sure if that's a good thing or not.

Of course, when HitFX comes out, it will be able to measure these things directly, instead of having to use several different variables to back into figures like batted ball speed and launch angle. But until then, Hit Tracker Online is a fantastic free website that focuses on the most exciting part of baseball. Why isn't it more popular?