Thoughts on the Playoffs

Share All sharing options for: Thoughts on the Playoffs

But first, I have to show off a wedding present. This picture hardly does it justice, but it is a handmade quilt, made by my best friend and her mother. In the center, you will see the A's logo with our names, and you can barely make out the outlines of players in the diamond. Each base represents a step of our relationship; first date, engagement, elopement, wedding celebration. All along the border of the quilt is stitched, "Take me out to the ballgame, take me out with the crowd. Buy me some peanuts and crackerjack, I don't care if I never get back, Let me root, root, root for the A's, if they don't win it's a shame, for it's one, two, three strikes you're out at the old ballgame. It's priceless. And pretty amazing that in this time in my life, how well-represented the Oakland Athletics are. 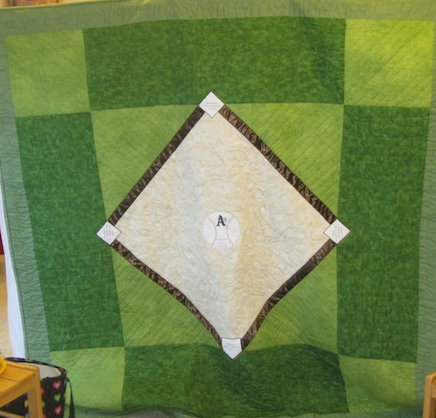 Some playoff thoughts in no particular order:

1) As a human being, I kind of want to give Brooks Conrad a big hug. However, if he was still on the A's instead of the Braves and he put us through what their fans have gone through over the last two weeks, I'm pretty sure I would have a few words for him. Such as "retire" and "now". Honestly, I try not to play the blame game, since losing a baseball game is rarely the fault of one position player, or one play itself, but it doesn't take too much of a stretch to pin the NLDS loss squarely on Conrad's glove. And while I know that the Braves suffered catastrophic injuries this season, right down to the last day, I still can't quite get over just how much of a meltdown Conrad suffered.

Despite a few Tweets at his expense, I think the Atlanta fans and the sports media have been great to Conrad; I was genuinely worried for the guy after the second error of the NLDS Game 3. For those of you who haven't been paying close enough attention, let's look at the last two weeks for the Braves, who barely snuck into the playoffs and who basically eliminated themselves against the Giants in the NLDS.

Four errors in four straight games to close out the season, leaving Atlanta barely clinging to a playoff spot. Could be high-pressure jitters; would all be forgiven in the NLDS?

Not so much. Conrad made another error in Game 1 of the NLDS, picking up where he left off. He recovered nicely in the second game, but Game 3…oh Game 3. Brooks Conrad made not one, not two, but three errors in the game, and basically handed the Giants the win. And as much as I like the third-year former-Athletic, oh man. That's brutal. And Atlanta--who absolutely didn't have anyone else to put out at second base--put someone else at second base for what would be their final game.

2) I'm bored of the Phillies and Yankees.

Ho hum. Another playoff series, another sweep, all leading up to the exciting conclusion; the World Series of Yankees and Phillies! Who doesn't want to see Halladay, Oswalt and Hamels take on Jeter, A-Rod and Teixeira?
If we're being honest, not me. Sure, I get the baseball appeal; the best hitting versus the best pitching, but to say that those two teams do nothing for me would be an understatement. And I'm probably alone, but I'd like to see some new match-ups, some new blood, and I think it's 100% more exciting to watch one of the behemoths fall to an underdog during the playoffs than it is to watch them win.

3) All that being said, a playoff no-hitter is still an exciting game, even if it was practically predictable. Maybe we can see two?

4) The Cliff Lee trade was worth it, no matter if Justin Smoak turns out to be Carlos Gonzalez. The Rangers picked up Cliff Lee to take them to the playoffs, and he not only cruised them in, but he also secured the ALDS win. He earned his contract and performed exactly like the Rangers needed him to, and even years from now with a successful career by Smoak, I still think Rangers' fans can argue that the trade was worth it. (Unlike, well, almost every recent trade for the A's.)

5) I really want to see the Rangers play the Yankees when the A's are not a factor. Normally, I have to root against the AL West out of loyalty to the A's season, but this time I think it's an easy call. Seeing the Rangers win their first playoff series was a fun moment; less of the "been there, done that" vibe of the Yankees, and I'd actually like to see more of that.

Your thoughts? Who are we rooting for?