The Art of Pretty Charts

Share All sharing options for: The Art of Pretty Charts

A big part of my job here is to take complicated statistical ideas and boil them down into understandable and readable articles. Often, especially when dealing with lots of numbers, it's far more economical to show data in the form of a graphic. I'm not sure if you guys find these graphics as fascinating as I do, but if not...well, there's a playoff game tonight.

Kevin Dame has been making inventive graphics at his blog and at The Hardball Times. He's kindly allowed me to reprint some of his work here. Click the images for much nicer large versions.

Fangraphs keeps track of every kind of pitch that a pitcher throws and separates a pitcher's results by pitch type, so that a particular pitch can be compared in effectiveness to other pitches of its type. Dame created a graphic called "Paintomatic" that elegantly shows pitch selection, pitch type frequency, and pitch type effectiveness. 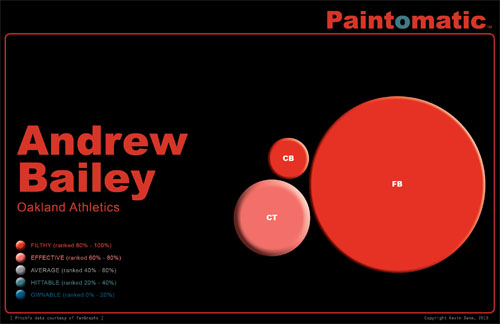 The size of each bubble shows the amount of pitches thrown, and the color (from blue to red) shows how effective it was. Andrew Bailey throws three pitches and gets great results on all of them. For comparison, here's a pitcher who was pretty average, and here's someone who was pretty terrible.

Another one of my favorites is his "5 Tool Analyzer", which is basically a radar chart where the axes represent a modified version of the traditional five player tools. He uses on-base percentage, power, fielding range, arm strength, and speed. This is probably a lot easier to understand just by looking at it, so here's our future left fielder (er...right, Billy?), Carl Crawford. 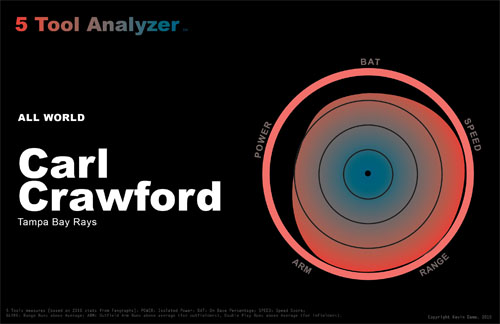 For contrast, here's Rangers CF Julio Borbon, whose chart looks a lot like what I imagine a worse version of Rajai Davis would look like. Of course, the five tools aren't all worth equal amounts, so total area doesn't exactly correspond to total player value, but other than that little issue, I really like the idea of approximating player value through tools and area on a graph.

And in what is one of the most aesthetically pleasing graphics I've seen in a long long while, his "AfterGlow" series tracks a team over the last five years in runs scored and runs allowed, to see overall team quality. The enormous rise of the Tampa Bay Rays becomes very apparent. 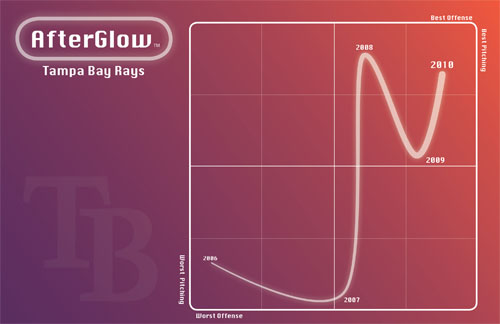 Also just as apparent is the equal but opposite decline of the Cleveland Indians, and the endless dominance of the New York Yankees.

He's got a lot more visualizations on his blog (like this chart detailing the Twins' postseason failures when meeting the Yankees, and this interesting Red Sox salary/WAR graph) so definitely go and check that out here.

At 5:00 PT, Cliff Lee will take the mound in St. Petersburg opposing David Price in a crucial ALDS Game 5. The winner gets the right to be slaughtered by the Yankees in the ALCS. Unfortunately.