Hey look, I already had nothing to lose -- Over the weekend I decided to leave the priesthood in order to follow my true calling as a toolsy outfielder, and let me tell you that God is none too pleased. Actually the A's aren't real thrilled either, as I happen to have "Crosby ability" -- specifically Bobby's stats, Blake's ability, Ed's personality, Bing's temper, and David's liver.

So now that we know the A's minor league system can only develop good pitchers and good priests, where do we go from here? Throw a lot of strikes and pray for runs? Hey, you may not have enjoyed this post so far, but I have to tell you it's been a blasphemy.

All seriousness aside, though, I'm sorry that we'll never get to learn the answer to whether Grant Desme was a star, or a flop, in the making. Rarely is such little consensus reached on a prospect, but then again it's not often that a prospect has a "breakout year" in which he almost never hits the baseball. Desme was going to make one camp or the other look foolish, and now we'll never know which one.

Anyway, as prospect #5 bites the baseball dust, here's hoping that Chris Carter doesn't wake up tomorrow and realize that his "true calling" is as a left-handed batter, that Michael Taylor doesn't have an epiphany that he's living a lie as a man, that Adrian Cardenas doesn't work with Mark McGwire on his swing or his press conferences, and that Michel Ynoa hasn't met the real Jairo Garcia. Josh Donaldson may be better than I think but I'd just as soon he not become the A's best prospect.

Oh, and if Ben Sheets wants to pitch for the A's next year, I'd be willing to let him.

So I thought I'd share my A's "depth chart" models, posted so that my poor mom (still grieving the loss of Nick Swisher, and perennially mad that players come and go so often), can keep up with the flurry of off-season activity and follow the names and faces to be excited about for the near future.

Here's the A's roster, as it currently looks like it might be, maybe, if nothing changes and if I'm right, for now anyway, as of this morning... 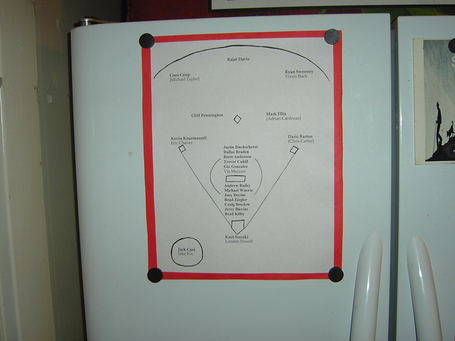 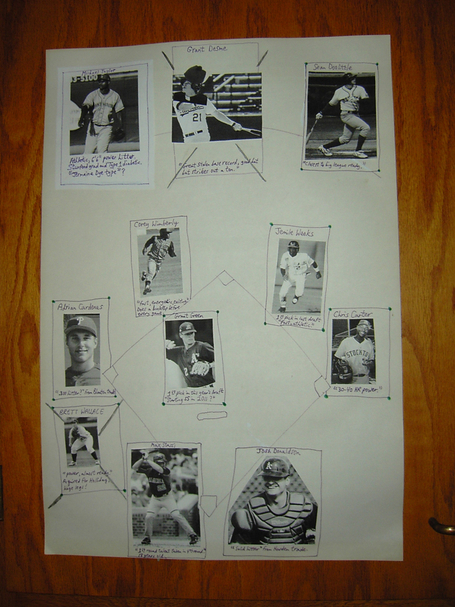 You can see them a little bigger, and thus a bit more clearly, if you follow the link. Happy Sunday, and remember: Only 39 days until the Cactus League opener!