Share All sharing options for: Do It Like a Gio! Gonzalez K's 7 as A's Shut Down Halos, 3-0 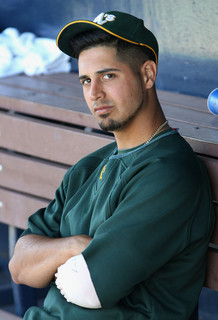 The Athletics' train kept a-rollin' as Gio "Long Time" Gonzalez turned in a most masterful performance, with Michael Wuertz striking out the side in the 8th for an even 100 Ks on the season.  Andrew "The Old" Bailey lowered the gavel on the punchless Angels in the 9th for his 26th (and 21st consecutive!!!!) save, so an ongoing A's rookie record, well, goes on.  Rajai Davis continued hotter than the temperature of the core of the sun, squared, with a double to extend his career-high hit streak to a lucky 13.

Image resized to accommodate how small Jeff Mathis must feel.

This was a game that seemed to turn, at least in terms of scoring, on a pair of consecutive errors in the 7th.  With Eric Patterson (who continued to tear it up with another couple of hits) on third after he singled, stole second, and took 3rd when catcher Jeff "Chances Are" Mathis' throw went into center field, Mathis attempted to atone with a snap pickoff attempt.  Proving once again that two wrongs do not indeed make a right, it sailed down the LF line... Patterson scored for a 3-0 A's lead which they would not relinquish, drawing Oakland one step closer to the (now 7-1) finish we need to end at .500 for the tumultuous 2009 season, which I think we'd all agree would fookin' rawk.

Can't possibly say enough about Gio tonight, who showed a tasty slice of the promise that he has flashed throughout the year, and IMO assured himself of a mighty serious look for next year's rotation with this evening's activities.  The A's are officially the hottest team in baseball now, with a 16-7 September mark and a brisk 15 out of 19 and 10 out of the last 12.
So I guess this means we'll see you all tomorrow night?  I thought as much.  Go