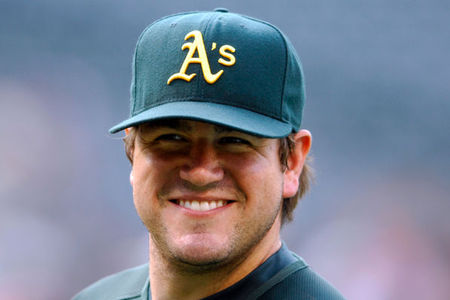 It's funny until someone gets bronzed alive with the winning run on in the 9th.

Well, that was another classic te

e. If baseball were foreplay, these A's would be running (streaking?) away with the West.

The Athletics put the first 2 aboard in the ninth but the rally died there, with Joakim Soria (in just his 15th inning of work tonight) inducing Nomar Garciaparra to bloop out to LF to end it after freezing Jack Cust on a (what else) 3-2 pitch for the 2nd out.  The A's failed to take advantage of a Royals bullpen which had more trouble throwing strikes than Earl Anthony with his eyes poked out. 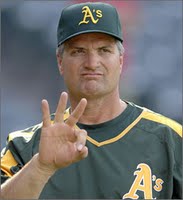 Wow, I've sucked for how many years in a row now?

This game kind of boiled down to the question of the day, which might've been "Why did Bob Geren remove Edgar Gonzalez after 5 innings and merely 69 pitches?"  Before you could say WTF BOB, Jay Marshall and Jeff Gray had put Oakland in a 4-1 hole from which they would never emerge, with new A's nemesis Alberto Callaspo doing the biggest damage with a 2-run single.  Late RBIs from Adam Kennedy (single) and Mark Ellis (fielder's choice) drew the A's closer but did not provide the needed cigar.

Not much else to say about it all, other than good game and get 'em tomorrow, which begins a fleeting 13 hours hence as we fire up another $2 Wednesday.