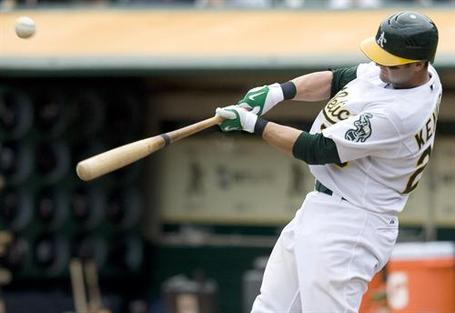 Reports of another Kennedy burial may be premature.

An AK single plating The Unicorn of Pleasant Destiny, who himself then knocked in a run with a bases-loaded dribbler, has the A's to within 4-3 as we head ninthward.

Tonight is the 7th anniversary of Win #18 in the legendary Streak of 2002, wherein a certain Miguel Tejada walked it all off with a 3-run showstopper that almost made Ken Korach spontaneously launch 5000 feet in the air over Zhone Way.  Whatever happens here, be very proud that your team and your team alone accomplished such a feat at one time not that long ago... someone wins the World Series every year, but no one may ever win 20 damn games in a row again, believe it.