When the schedule was released, I looked at the past week and said to myself, "Self, Rickey is going into the Hall. Wouldn't it be awesome..."

Well, I wasn't the only one who thought that. Amongst the others with that exact thought was my brother. And we took a brotherly trip for the ages. Thank you for inspiring us Rickey!

Here are some of my thoughts on the Stadiums we visited, the teams we watched and how those situations relate to our A's.

The first stop on our trip was New York City. We landed on Thursday, and Matt Holliday was still on our favorite team. We went to the game on Friday and Matt Holliday wasn't. But, getting Adam Kennedy's batting practice ball made up for it (and knowing that Brett Wallace was in the organization did too). The game sucked, so let's talk stadium. 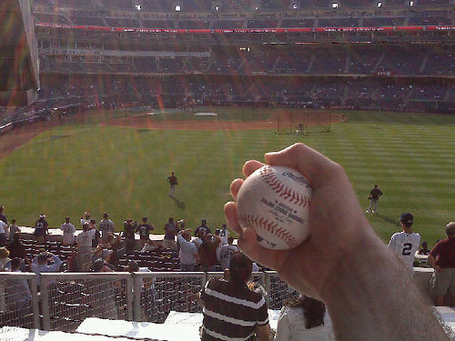 My thoughts on Yankee Stadium are this... When we got off the subway, there was an eerily familiar feeling. I looked down on some shanty like buildings housing sports (mostly Yankees stuff of course) memorabilia stores and a few sports bars and it occurred to me that I was looking at a larger version of the burger joint under the BART ramp in Oakland. In short, I wasn't really impressed.

When we got inside the joint, I was overcome with a rush. I was in YANKEE STADIUM! My brother can back me up. I had to stop and take a deep breath before walking up the stairs and looking down at the playing field. I was not disappointed when we got up to the top step and stood staring down over the "bleachers" in Left Field.

Now for the History...I am always harping on the A's for not using their past as a marketing tool. But I have got to say over using it is not much better. I didn't need to see career highlights of back up players from the 50's and hear intimate interviews with their minor league teammates throughout a 3 hour long batting practice. I was slightly annoyed to be reminded of walking down Embarcadero in San Francisco and seeing plaques for such stalwarts as Kirk Manwaring and Johnny Lee Lemaster affixed to AT&T Park. Seriously, put up the good guys, make retrospectives about them... but don't beat me over the head with crappy players and talk about the great history of the franchise in the same breath... it's kind of an oxymoron. 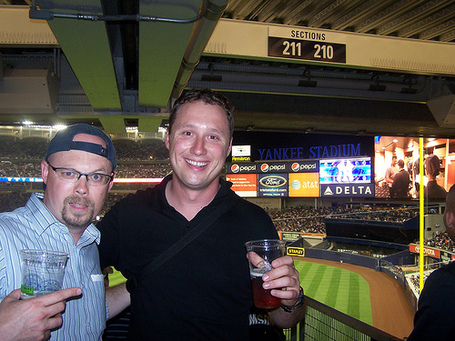 As the game progressed and we checked out the stadium as a whole, I have to say that I would be happy if the A's had a stadium like Yankee Stadium. It basically reminded me of the pre-Mt. Davis Coliseum with much wider concourses and a good view of the field no matter which concession stand you stopped at for a beer (we hit Beers of the World most of the time). That said, Yankee Stadium is over rated. There I have said it. That place is not all that spectacular. Maybe it is the white walls that make it feel sort of sterile, in the hospital sense. Maybe it is the trumping up of history for history's sake, as if the 1961 Yankees were history in the same sense that an armistice is history. Whatever it was I have to say of the new stadiums I have been too, this one isn't really in the top tier.

But do go and visit... because it is a place all baseball fans should be able to say they have been too.

Next on our trip was a train ride to Albany and then a rental car to Cooperstown. Albany was nice enough, probably because of the beautiful train ride along the Hudson River. Cooperstown was INCREDIBLE.

It was like walking down Main Street in Pleasanton, old buildings with bricks and large storefront windows. The only difference was that every store had something to do with baseball. From the memorabilia stores to the Triple Play Diner, they all had a tie in to the greatest game on Earth.

Personally, the best part was meeting Dave Stewart and laughing with him about how all the Red Sox fans in attendance probably couldn't remember his career record against Clemens. "Selective recall" Mr. Smoke (he chastised me for calling him Mr. Stewart) said out loud and proud. 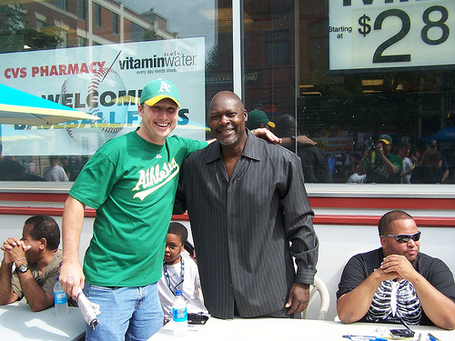 My brother (Dogdays) and Mr. Smoke discuss his dominance of Roger Clemens (via obiwan2900)

Rickey wowed. I got text messages from friends I hadn't seen in a long time to let me know I was on national tv. All in all, at the risk of offending Muslim's, Cooperstown is to baseball as Mecca is to Islam. I can't really put it into words. You must go. Maybe someday another Athletic will go into the Hall and you can go on Induction Weekend, but even if not... just go.

I wonder if there is an East Bay Sport's Hall of Fame? I am too lazy to type this into Yahoo and look. If not, there should be one in Pleasanton at the end of the street to replicate Cooperstown. I know, not quite the draw... but still I'd love to walk up and down a street that feels like Cooperstown on a semi regular basis.

The last stop on our trip was Boston. As much as I hate to admit it... Boston does baseball right.

Walking up and down the closed Yawkey Way before the game I felt the pangs of missed opportunity. It was like a carnival. Beer drinking, stilt walking, everyone in a great mood to the point where no one even ripped on me for my Rickey Henderson shirt and A's hat. And this was on a MONDAY!!!!! It was the kind of environment I used to think was possible in Uptown Oakland before that never happened. 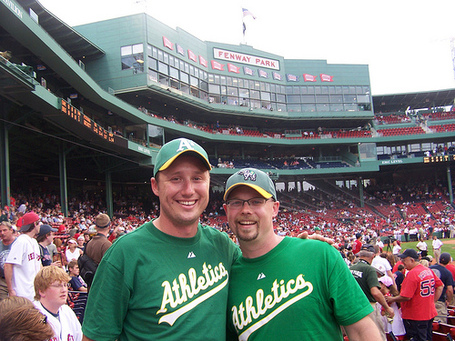 The game was no better than the one in New York, Trevor "I Am Not Ready For The Big Leagues" Cahill got rocked. But the atmosphere was ridiculous and it got me to thinking that Lew Wolff is on to something with the smaller stadium concept.

If you could combine the best of Yankee stadium (wide concourses and a view of the field from everywhere) with the best of Fenway (intimate, carnival outside before the game) you could have baseball heaven. To make this happen, the A's will need an urban setting with bars nearby. This is possible in San Jose or Oakland (although I am not sure where exactly in Oakland at present). Make it happen A's!!!!

In closing, I just want to say... this trip was an awesome experience and everyone should follow the A's east to these two cities at some point in their fandom. Who else went? What were your thoughts?