What a difference four months makes. At the time this game should have been played, the A's were riding high; having taken a 2-1 lead in the opening four game series against the Angels with a comeback win that seemed to signal a good omen for the upcoming season. Unfortunately, everything changed--seemingly overnight. The A's/Angels game was canceled; the life of a promising young pitcher was cut tragically short, and the A's now play tonight's game well out of the running for 2009. The Angels--with heavier hearts--do appear to be the AL West playoff entry once more.

Tonight, after a ceremony for Adenhart, Trevor Cahill and the A's will take on Ervin Santana and the Angels tonight in a contest of pride, and not much more. Cahill pitched very well his last time out (in what was also AN Day!), but his offense was unable to get him the win; running his no-decision total to eight so far this season. The A's would win the game on a walk-off single by Suzuki.

Tonight's game has a delayed start, due to Adenhart's ceremony, and due to a last-minute decision, I'm going to go. Nico will be your host through the game, and I will recap the game when I get home from it. 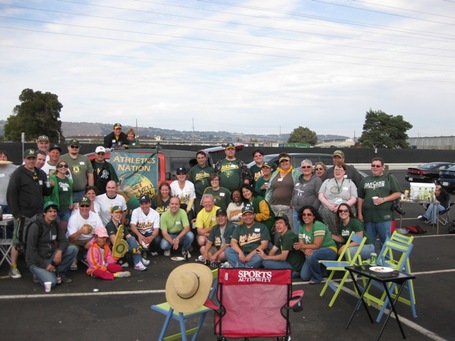