Open Thread: The One Where The Players Make Us Feel Better

Share All sharing options for: Open Thread: The One Where The Players Make Us Feel Better

The A's have a few things going for them this early season. As the Rays limp into town, it is worth noting that their record mirrors the A's--a 6-10 record to a 5-9. This is a series where if the A's can get something going against another struggling team (who we only see once in Oakland, and won't be playing like this for long), they could really make up some ground.

The AL West has started the season almost as slow as the A's themselves; the A's find themselves just four games out with virtually NO offense to start the year.

The homerun total is shocking, though. I was talking to baseball fans last night, who don't follow the A's, and I had them guess how many homeruns the A's have hit so far this early season. The guesses ranged from 16-20. You can imagine their surprise at the actual number.

There's an article on MLB.com describing the very problem the A's were to have solved with Matt Holliday and Jason Giambi; that the pitchers wouldn't have to be perfect this year because the offense could score runs. And it's worth noting that the A's came back from two different deficits on Wednesday; as frustrating as that game was, there were signs of life.

"We haven't done what we thought we'd be doing," Cust said. "But it's April. We've got a ton of baseball left, and there's too many good hitters here to struggle too long. I'm not just talking about the home run guys, either. We've got good hitters up and down [the lineup]."

"We've got some guys swinging the bat well, we really do," Oakland manager Bob Geren said. "Zook is obviously one of them, but I like the way Jason and Matt and a few other guys are swinging the bat, too. It's just a matter of time with hitters as good as some of these guys are."

Okay, I may have laughed at this part.

"The difference between this team, offensively, and last year's team is night and day," second baseman Mark Ellis said. "I'm sure fans are a little bit frustrated right now because we haven't scored the way we know we can, but everything's magnified at the start of the season, good and bad.

I love the shout-out from Mark Ellis, and he's right. I'm willing to give the A's some more time, and although I'd love to believe Giambi...four homeruns? Really?

Let's see if the A's can right the ship. Trevor Cahill takes on Scott Kazmir tonight in what could be a long game; both pitchers are not on the economical side of pitch counts. Let's hope for a Cahill outing like he had against Seattle. 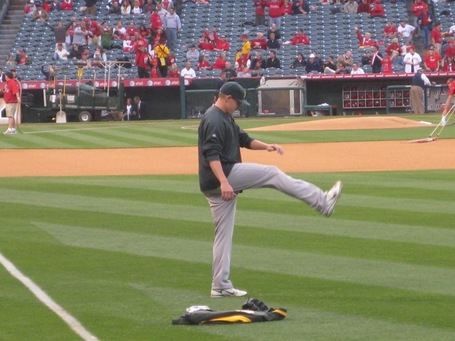 Game time 7:05. The game thread will be posted when lineups are announced.