Based on Nico's announcement last night and my UID, I will soon be known as "goatlover5526." For now, I remain "Flashfire."

Riding a three-game winning streak on the heels of a 16-hit attack in their 12-1 thrashing of the Seattle Mariners, the Oakland A's bus it over to Peoria today for a 12:05 PM matchup with the San Diego Padres. You can hear it on 860 AM (website in case you like the radio on your computer). Today's paper says the game will be shown on MLB Network, which I believe is the first chance we'll have to see the A's on the box with the moving pictures.

Sean Gallagher was scheduled to take the hill for the Green and Gold but was scratched because of what he called a "crud" virus. I'm sure most of us know what that's like.  Gio Gonzalez will start instead while the Friars will send out Josh Geer to oppose him. San Diego is coming off a 13-11 loss to the Colorado Rockies, but they knocked around ex-A's closer Huston Street to the tune of 5 runs, 4 earned in just 1/3 inning as he coughed up two homers.

A few quick stats from today's game notes, available through mlb.com: A's starters have allowed four ER in 21 IP (1.71 ERA) and the pitching staff has a 3.42 ERA overall, second best in the Cactus League. Pitchers have allowed one walk or fewer in four games and just 22 so far, third best in Arizona. If you're looking for good signs, that's a good one. However, the A's have hit just four home runs, none in any of their last four games, and that's last in the Cactus League, third worst overall. If you're still looking for good signs, that's a bad one. Odds are they'll hit their share with the people they project to have in the middle of the order.

One of the stories surrounding the A's is when 3B Eric Chavez will take the field. Word is this should happen within the next few days. Also of importance is the status of starting pitcher Justin Duchscherer, who saw Dr. Lewis Yocum in Los Angeles and was given a stronger anti-inflammatory along with being told to rest. The Duke believes he could be ready for Opening Day if all goes well after playing catch on Monday. (source)

As some of you may have noticed, Jared Lansford saw action against the Giants Thursday in Scottsdale. With father Carney there as San Francisco's hitting coach, instead of watching Jared pitch he ended up leaving to wander the parking lot because he was so nervous. This is one of those things that must make a father, especially one who had a solid career of his own, so proud. Still, you can see how Carney's torn between wanting his son to get the job done to help his chances with the A's but at the same time wanting his hitters to succeed as well. (source) 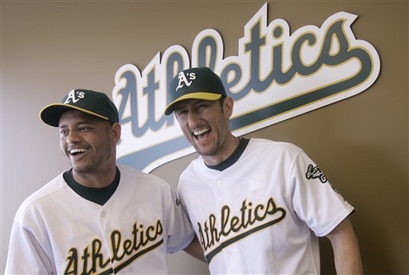 (via AP and the A's photo gallery on Yahoo)

Over on the World Baseball Classic side, the United States gets started by facing Canada at Rogers Centre in Toronto in 15 minutes (ESPN). Closer Brad Ziegler worked in Tuesday's exhibition against the Yankees but didn't pitch in either of Team USA's other two games prior to heading up north, so odds are probably good he may see some action today depending on the circumstances. If you want to, you can also see outfielder Chris Denorfia play for Italy when they take on Venezuela at 5 PM.