Share All sharing options for: Final WBC Thoughts (and Pictures!)

baseballgirl update: More bad news for Duchscherer, who didn't make it out of the first in a minor league game:

"My arm still isn't right," Duchscherer told MLB.com. "I was fine warming up, but as soon as I started throwing at game speed, I knew I wasn't going to last long. It got worse on every pitch. I walked a guy and gave up two singles and a homer and just said, 'I can't pitch like this.'

"It's probably the most frustrated I've ever been since I started playing baseball."

He'll probably begin the season on the DL. 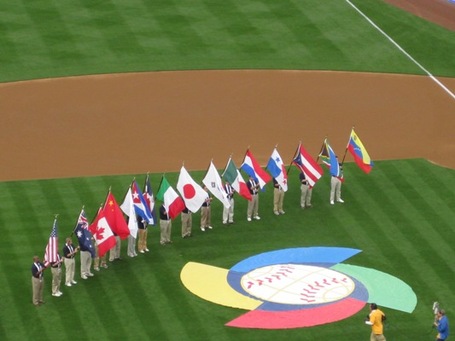 Confession time: Knowing that I had tickets to the WBC semi-finals, I must admit to being excited (and not just a little relieved) when I found that the U.S. was going to be here in Los Angeles. After all, I reasoned, the very best baseball comes from the professionals, right? And MLB certainly draws the best of the best from all over the world for their teams, so the more MLB players on the field, the better the baseball, yes?

Anyone who saw Ichiro's at-bat in the finals to win the game for his team would be hard-pressed to find a better at-bat from a sensational MLB player, but I will freely admit that I was simply astounded at the quality of baseball being played from teams with little-to-no recognizable MLB names.That shouldn't be surprising; baseball is huge in other countries, and they are serious about their teams.

Cheers of  "Korean Republic" and "Japan" in their respective languages drowned out nearly everything else in the stadium, and although not a sellout, the crowds were still pretty good for an off-season baseball event.

I took some just-for-AN pictures of the first game for you all. 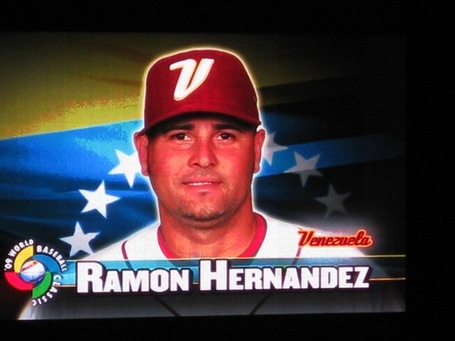 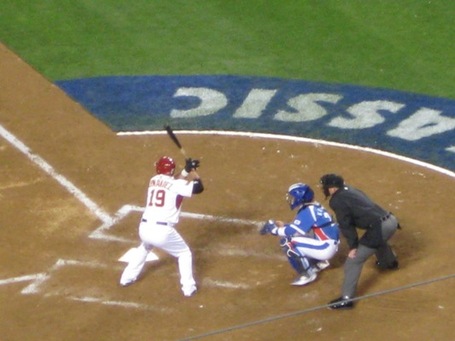 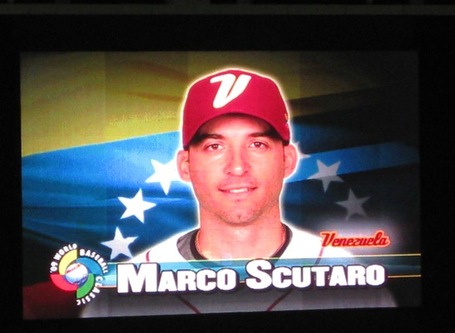 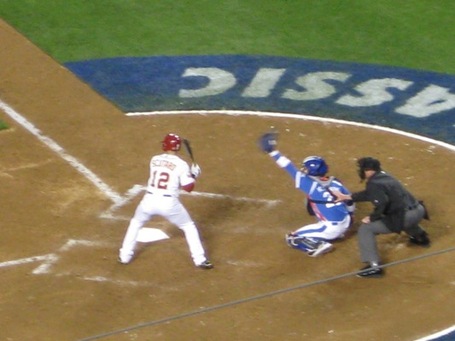 After Korean made Venezuela look like a little league team (in every way possible; how do you rack up 5 scored errors with 2 or 3 other misplayed balls in a professional contest?), Japan took on the United States, in what was a much better game. Can you pick out the A's player? 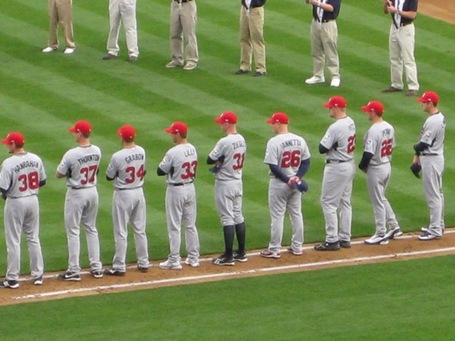 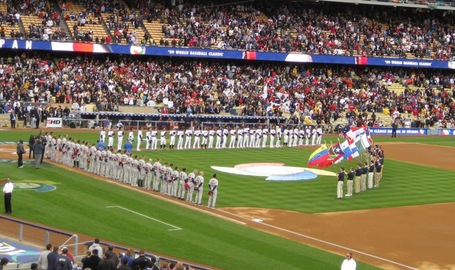 I stayed home from the WBC on Monday night, intending to catch a couple of innings here and there of the final game on television, but I started watching the game, and couldn't stop, as many of you also experienced. There is such a different level of baseball played by Korea and Japan (including the cheers for a simple walk that mirror walk-off homeruns in MLB), and it is fascinating to watch. The game is faster, the running game is prevalent in every inning, and the players are tough.

Did anyone happen to see the slide that broke open a batting helmet in three places? If one of our players slid so hard into someone's knee that he shattered his helmet, we're talking DL time for sure. Not only did he get up from having his bell rung, but he played the rest of the game.

Another clue to the seriousness of the sport (and this is not a political observation by any means, I'm just pointing out the stakes) was when it was suggested that a Korean player could avoid mandatory service (draft) if Korea won it all; WBC star athletes are treated as Olympic athletes. Sobering, when you consider that while it is a game to us; it's very much real-life stakes for some of these players.

The final game of the WBC was one of the best baseball games I've ever seen, and that's quite a statement. I only wish that some people who complain about the nature of baseball--it's too slow, it takes too much time, nothing ever happens--had tuned in. I couldn't tear myself away.

In conclusion, I was impressed by the WBC. I'm impressed that our U.S. players have said over and over how much it meant to them to be there representing their country. I'm impressed at the fans who attended the WBC, and the fans all over the world who watched. I know there are mixed feelings from MLB fans about this event, but overall, a net positive for me, and I hope, baseball.